Can land grabs by foreign investors in developing countries feed the hungry? So says the press release for a recent, and unfortunate, economic study. It comes just as civil society and government delegates gather in Rome [in August 2014] to negotiate guidelines for “responsible agricultural investment” (RAI), and as President Obama welcomes African leaders to Washington for a summit on economic development in the region.

At stake in both capitals is whether the recent surge in large-scale acquisition of land in Africa and other developing regions needs to be better regulated to ensure that agricultural investment contributes to food security rather than eroding it by displacing small-scale farmers.

The recent study paper will not advance those discussions. It is the kind of study that gives economists a bad name. Economists like the one in the oft-told joke who, shipwrecked on a deserted island, offers his expertise to his stranded shipmates: “Assume we have a boat.”

In this case, these seemingly well-intentioned Italian economists came up with the dramatic but useless estimate that global land grabs could feed 190-550 million people in developing countries. The heroic assumptions they needed to get there should have stranded them on a deserted island, because they make no sense in the real world.

Perhaps the most absurd assumption, though, is that the governance mechanisms exist, at the national, international, or corporate levels, to manage the surge of investment we’ve seen since the food price spikes of 2007-8. Trust me, they don’t, which is why the UN’s Committee on World Food Security is meeting in Rome this week to negotiate the RAI guidelines.

Those negotiations have proven contentious, with developing countries and civil society groups demanding that land rights be included in the guidelines. Some rich country governments, such as that of the United States, resist such measures saying they interfere with the development of markets, which they see as the ultimate solution to … well … everything.

In Tanzania, those land markets are going fast and furious, fueled by government programs to make large tracts of land available to foreign investors. Many have gone for biofuel crops like sugar and jatropha, the oilseed tree that has proven to be a spectacular fiasco all over Africa. The governance failures include not just the taking of 20,000-acre tracts of good land, based on false promises to local villagers, but then the failure to return the land to those villagers when the project collapses.

In Kisarawe, Tanzania, that land instead was simply subleased by the bankrupt Sun Biofuels to Mtanga Farms, a Tanzanian company that has disavowed any responsibility to fulfill the promises made by Sun Biofuels [see the Kisarawe district saga] when it secured the land in the first place. 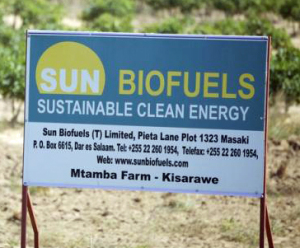 This is the kind of irresponsible investment that has negotiators in Rome trying desperately to plug the yawning land-governance gap in order to protect the rights of small-scale farmers, most of whom lack formal titles to their land.

In Zambia, the government has taken the same proactive approach to attracting foreign land investors, securing good land and promising infrastructure development as part of the new wave of “public-private partnerships” that are supposed to stimulate agricultural development.

Mostly, investors don’t wait for the national government. They go straight to local leaders, who have traditional authority over “customary lands” farmed by small-scale producers. They cut deals that displace local farmers for the large-scale production of sugar cane or some other cash crop, often for export.

At best, you get a managed process to attract investors to one of the Zambian government’s “farm blocks”—250,000-acre tracts intended to bring in a foreign investor to establish a “nucleus farm” of 25,000 acres around which other large, medium, and small farmers can get land to grow crops for the investor’s processing facility.

Such schemes have had some economic success in rice farming in some countries, but the issue of displacement of small-scale food producers, generally for export agriculture, remains. So does the limited involvement of small-scale farmers and the overwhelming export orientation of most projects.

Zambia has one such farm block project going in Nansanga, but this land is neither idle nor unoccupied, as proponents of such schemes often suggest. Some 2,500 farmers live on the Nansanga land and they do not want to be moved or swallowed up by the larger project.

It is certainly difficult to see how such projects address the desperate needs of the 80% of rural Zambians who are poor and food-insecure. They are food-insecure in part because they are land-poor; they do not have enough decent land to support their households. While the government auctions off the country’s best land, these villagers are dividing their small landholdings among their children, resulting in smaller plots and greater poverty.

Which begs the question: If the goal is to address the urgent issue of food security, why not give some of those good agricultural lands to land-poor smallholders?

In Zambia, I saw one very small project that did just that. The Chanyanya Smallholders Cooperative Society of 126 households in Kafue, south of Lusaka, got secure title to about 1,250 acres of land, irrigated it with European donor support, set up small garden plots for themselves on some of it, and sublet the majority to a commercial soybean and wheat farming business in which they 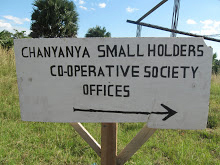 They get more food, with year-round production of cash and subsistence crops from their garden plots, thanks to the irrigation. The land gets developed through capital-intensive investment, with cooperative members sharing in those profits and retaining title to the land. They seemed enormously better off, though they might do even better if they each had 10 irrigated acres and they were shown how to become mid-size commercial farmers.

Interpreting the data from that flawed land grab study a little differently, the researchers show, in effect, that in Tanzania 3.1 million people additional people could be fed by just giving the land to small-scale farmers. Or, more realistically, one could increase by 25% the caloric intake of 12.4 million people who don’t get enough to eat now. Invest in the land and, according to these researchers, one could do the same for 20.4 million people.

That would go a long way toward wiping out rural poverty in Tanzania. It doesn’t look anything like a “land grab.” But it sure looks like “responsible agricultural investment” to me.

Timothy A. Wise is Policy Research Director at the Global Development and Environment Institute at Tufts University, where he is currently researching African food and agriculture policies as part of a project on a Rights-Based Approach to the Global Food Crisis.He is currently an Open Society Fellow. With a background in international development, he specializes in agricultural policy and rural development. He is the former executive director of Grassroots International, a Boston-based international aid organization. He holds a Masters in Public Policy from Tufts’ Urban and Environmental Policy and Planning Department.