Between independence from colonial rule in the early 1960s and the end of the cold war in 1991, not a single African ruler was peacefully ousted at the ballot box, except in the Indian Ocean island of Mauritius. But since Mathieu Kérékou of Benin and Zambia’s Kenneth Kaunda bowed out graciously in 1991, at least 30 African leaders or ruling parties have let their countries’ voters kick them out. Multiparty systems in Africa now far outnumber single-party ones. This contrasts strikingly with the Arab world, where so far almost no incumbent-ejecting elections have taken place anywhere.

Yet Africa still harbors too many dinosaurs whose time ought to have passed. Half of the world’s 30 or so longest-serving rulers are African. Some, such as Zimbabwe’s Robert Mugabe, now nearing 34 years in charge, started with genuine popular consent. So did Yoweri Museveni, who has run Uganda since 1986, but like Mr Mugabe is now loth to let go (see separate article A Family Affair?). Several other old-timers have been in charge even longer. Teodoro Nguema of oil-rich Equatorial Guinea pushed out his even ghastlier uncle in 1979. Angola’s José Eduardo Dos Santos became president, on a supposedly Marxist ticket, in the same year. Omar al-Bashir, wanted by the International Criminal Court for alleged crimes against humanity, has presided over Sudan since 1989. None of these grim figures would still be in charge if the people had more freedom.

The continent’s biggest democracies, South Africa and Nigeria, have not lately been a compelling advertisement for representative government. South Africa, ruled by the African National Congress since 1994, is in danger of becoming a de facto one-party state. Nigeria’s politics is so corrupt that it gives the D-word [D as in democracy] a bad name. In both countries large majorities of people still live in penury, despite the rise of billionaires at the top.

In the short term at least, autocracy does not seem to hamper economic growth. Some anti-democrats—Ethiopia’s late ruler, the authoritarian Meles Zenawi, is a favorite example—have seen their economies grow faster than those of more democratic neighbors. The increasingly ruthless Paul Kagame has made Rwandans a lot better off. Thanks to oil, Equatorial Guinea and Angola are among the fastest-growing countries in the world. []

The price of autocracy: Yet Mr Mugabe has pauperized a once-rich country, and some of the least-free countries are also the most economically backward. Most of the 300 or so desperate refugees who drowned off the Italian island of Lampedusa on October 3rd were from Somalia [sic] and Eritrea, Africa’s worst performers in political participation and human rights, according to the Mo Ibrahim index of African governance. As the index has repeatedly shown, countries that do well in political participation and human rights also tend to do well in economic development. And democracy is the best guarantor of peace, which is the best foundation for growth.

Western countries and NGOs give succor to protesters and lessons in institution-building, which is good, but they are losing their leverage. As China provides more grants, loans and trade deals with no tiresome strings attached, aid from the West that is conditional on more democracy and respect for human rights is less alluring to African rulers. So it is, increasingly, up to the African people to demand more of a say in the way their countries are run. For many, earning a living is too much of a struggle to think about politics. But Africans are changing, as computers and mobile phones allow them to argue and complain. Dinosaurs beware: the question is not whether they will demand better government, but when. [For further reading go to http://www.diasporascope.com/snakes-leaders-africas-political-succession/ ] 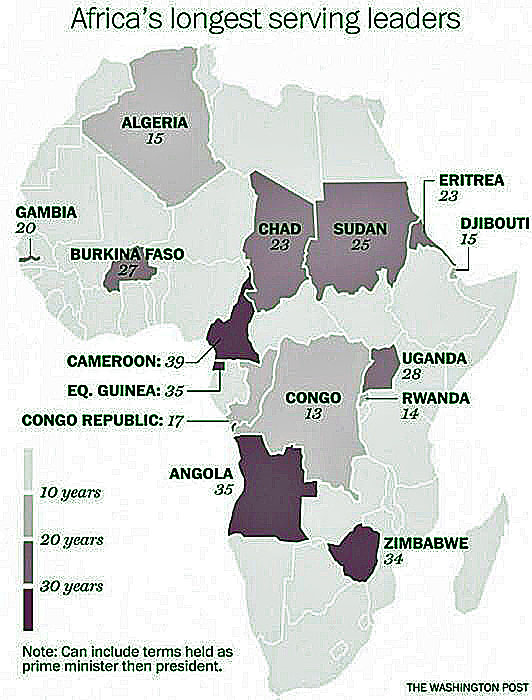 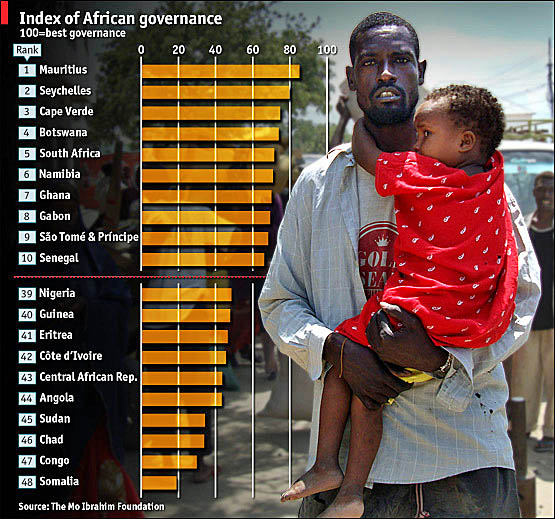