Few political rights exist in Ethiopia and even fewer voices criticize the government.

The right to remain silent is one liberty not denied to critics of the Ethiopian government. Most other political entitlements have vanished. This explains the puzzle of Ethiopia’s invisible political opposition: it is so battered and brutalized, tattered and torn, that what is left of its pieces may never fit together again.

The current government is mostly to blame. It came to power in 1991 after it toppled the communist military junta led by despot Mengistu Haile Mariam. The victorious coalition of ethnic militias promised a new dispensation, based on the concept of “ethnic federalism”. But nearly a quarter of a century later, Ethiopia remains a de facto one-party state. As countless analysts have noted, including successive European Union election observation missions, there is no separation between the government bureaucracy and the ruling Ethiopian People’s Revolutionary Democratic Front (EPRDF). No political space is allowed to dissenting voices.

Most critics are behind bars, the first and main reason for the absence of a political opposition in Africa’s oldest independent nation. Of the 547 members of Parliament (MPs), only one is from an opposition party. Girma Seifu Maru of the Unity for Democracy and Justice Party (UDJ) is the lonely MP—window dressing whom the government allowed to win a seat in the last general election in 2010. But large swathes of the UDJ are in prison.

Other opposition party members, including Bekele Gerba, a leader of the Oromo Federalist Democratic Movement, and Olbana Lelisa of the Oromo People’s Congress Party, were imprisoned days after meeting with representatives from Amnesty International in 2011. Andualem Arage, the UDJ’s vice-chairman, and another UDJ leader, Natnael Mekonnen, were put behind bars for debating the 2011 Arab spring rebellions. So was outspoken journalist Eskinder Nega, who posed questions about the possibility of a similar Ethiopian movement in his online pieces. In June 2012 Mr Andualem was sentenced to 75 years in prison, while Messrs Eskinder and Natnael got off lighter with 18 each.

They are just three of the thousands of government critics silenced in the slammer. Barely a month goes by without news of fresh arrests and detentions. In July, four more leaders of the UDJ, Arena Tigray and Semayawi (“Blue”) opposition parties were detained. In addition, Andargachew Tsige, an Ethiopian opposition leader and British citizen, was arrested in Yemen and extradited to Addis Ababa, the capital, in July. He is facing the death penalty for allegedly plotting a coup in 2009.

In July 2013, thousands of people took to the streets of Addis Ababa demanding the release of some of Ethiopia’s estimated 30,000-40,000 political prisoners, according to Amnesty International and Human Rights Watch. The protestors also called for the repeal of a draconian anti-terror law that has been exploited to target legitimate opposition members. Crackdowns and arrests followed, including the detention of 40 UDJ activists who had distributed flyers encouraging people to protest.

The second reason for the opposition’s muffled voice is fear: a decade or more of repression has taken its toll. The government spies on dissidents in the diaspora and uses its control of food aid to literally starve the opposition at home, according to Human Rights Watch. Yet, Ethiopia’s citizens seem to passively accept each new transgression of their rights. They are just too scared to fight back. A brief emancipatory moment swept Ethiopia in 2005. The ruling EPRDF, under the leadership of the late Meles Zenawi, allowed the forerunner of the UDJ, the Coalition for Unity and Democracy (CUD), a degree of freedom to campaign in the general elections that year. In polls that appeared relatively free, 174 opposition MPs were elected.

But the CUD disputed the results and protests erupted in the capital. Police killed nearly 200 unarmed protestors and arrested 40,000 CUD members and sympathisers in a nationwide clampdown, according to media reports. The memory of that brutality still casts a long shadow. Since then, the government has given no quarter. This is the third factor explaining Ethiopia’s invisible opposition: the government controls every aspect of daily life. In 2010 Human Rights Watch documented the strategic use of food aid, agricultural inputs such as seeds and fertilizers, 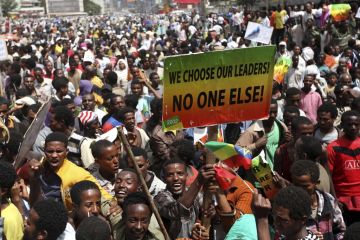 access to microcredit, teacher training and even university admissions to encourage support for the ruling party.

It worked. In the 2008 local election the ruling party won 99% of the votes and 3m local government seats. In the 2010 general election, the debacle of 2005 was avoided and voting was peaceful. The EPRDF took 99.6% of the parliamentary slots, leaving the UDJ with the one decorative seat.

The final squeeze on the political opposition and any form of dissent has been the use of repressive laws. The 2009 anti-terror law has a sweeping definition of terrorism. Another 2009 law bans NGOs that engage in human rights or advocacy activities from receiving more than 10% of their funds from abroad. It also requires all NGOs to re-register with a new government agency. This legislation closed down Ethiopia’s critical organizations and made hundreds of activists redundant.

As long-time Ethiopia observer, René Lefort, commented in July [2014) in an article on the Open Democracy website: “When the political space is impermeable, the inevitable internal conflicts can only overflow into the ethnic and/or religious sphere.”

They have. The government has been jostling for the last two years with the Muslim community that objected to government attempts to interfere in the appointments of the Islamic council. Every Friday, peaceful protests are held at mosques in Addis Ababa. Every Friday security forces shut them down and jail religious leaders, as reported in the media and acknowledged implicitly by government statements.

In June more protests erupted just outside Addis Ababa in opposition to what is considered a discriminatory plan by the city council to expand the capital and displace many of the ethnic Oromos who live at its edges. The government often makes blanket accusations against critics based on their ethnicity, linking them to banned ethnic-based militias such as the Oromo Liberation Front and the Ogaden National Liberation Front, active in Ethiopia’s eastern Somali region. At least 5,000 ethnic Oromos have been arrested between 2011 and 2014 based on their actual or suspected opposition to the government, according to an October 2014 Amnesty International report.

The EPRDF has portrayed itself as a vanguard party, charged with a sacred duty to articulate the “developmental state”. Its dictum is “You are either with or against us.” It has evolved a rich rhetoric for those who oppose it by labelling them “anti-development” or “neoliberal”. In the meantime, the state’s command economy depends on dollars from “neoliberal” donors. It took $3 billion in external assistance in 2012, according to the World Bank, more than any other country in Africa.

In the run-up to the May 2015 general election, will the EPRDF allow the opposition to compete? Will the opposition participate or boycott the polls? Such queries are beside the point: the struggle for democracy in Ethiopia was lost long ago. The next election will be another EPRDF landslide, in keeping with the history of the current ruling party and its revolutionary roots.

Ben Rawlence is researching and writing a book about Somali refugees in Kenya with the support of the Open Society foundation. He is the author of “Radio Congo: Signals of Hope from Africa’s Deadliest War”. Mr Rawlence received his master’s in international relations from the University of Chicago. He lives in London.