Europe wouldn’t take the ship’s stinking, poisonous cargo. So it sailed to Africa and dumped the toxic mess into an Ivory Coast lagoon. This is just the most recent example of western nations using Africa as a toxic waste dump.

The worst is when it rains. The water flows through the streets of Abidjan, the capital city of Ivory Coast, located next to a series of lagoons. With the water comes a toxic soup of industrial poison—a dark, glistening mess reeking of sulfur and rotten eggs. The caustic fumes it releases cause vomiting, nosebleeds, headache and rashes.

The hospital in Cocody, a downtown neighborhood in this city of 4 million, is in a state of high alert. Women stand waiting in the hallways, pressing paper masks tightly against their noses and mouths. Masks are currently a hot commodity in the Ivory Coast, where street dealers sell them for 20 West African centimes apiece.

A little over a month ago, a fleet of tanker trucks loaded with a toxic brew of cleaning chemicals and gasoline and crude oil slop was dispatched into the streets of Abidjan. Under cover of night, the drivers secretly dumped their loads in 14 locations around the city—near vegetable fields, fisheries and water reservoirs. All told, the cargo amounted to 528 cubic meters (18,857 cubic feet) of toxic waste that had reached the West African coast on board an oil and cargo freighter.

The route of the Probo Koala: Now many residential neighborhoods adjoining the dumpsites are all but deserted. When news broke of the first casualties, thousands packed their belongings onto donkey carts and buses and moved to the nearby forests—from which many had only recently fled to escape the violence of the country’s civil war. Angry demonstrators poured through Abidjan’s streets. The transportation minister, who had resigned over the scandal, was seriously beaten in broad daylight. The toxic slop has already claimed the lives of seven people, four of them children, and more than 9,000 have fallen ill, according to official figures. And although the vapors are gradually becoming less toxic, this is no reason for optimism. The disaster has crippled the city’s garbage collection, prompting fears in the medical community of epidemic disease.

The disaster is instructive: This is what happens when affluent western societies run out of places to dump their waste; when increasingly stringent environmental laws at home mean skyrocketing waste disposal costs; when criminal profiteers seek low-cost solutions.

The dead and sick in Abidjan demonstrate the failures of government agencies, of the unscrupulousness of businessmen and the dubious nature of international agreements like the Basel Convention, which has in fact banned the international transport of toxic waste to developing countries since 1989. For Achim Steiner, director of United Nations Environmental Program (UNEP), the toxic shipment dumped in the Ivory Coast is “a particularly painful example of how illegal waste disposal causes human suffering.”

Removing European waste: Some experts see Abidjan’s toxic cocktail as Africa’s biggest environmental scandal yet. But the odyssey of the Probo Koala reveals the scandal as a sordid story that unfolded in the heart of Europe.

It began on the afternoon of July 2. As the ship was unloaded in Amsterdam’s petroleum port, a west wind carried its sharp stench into nearby residential neighborhoods, where residents notified the police. “This is the worst stench we have ever experienced here,” said an employee of Amsterdam Port Services (APS), a waste disposal company. APS took a sample of the black substance from one of the ship’s tanks. Though declared as “waste water” used to clean gasoline shipping tanks, chemical analysis told a different story. The hydrocarbons in the material contained high concentrations of a substance known as mercaptan—a substance which is found in some crude oils and is produced by decaying vegetable matter, which is highly toxic—and smelly—in high 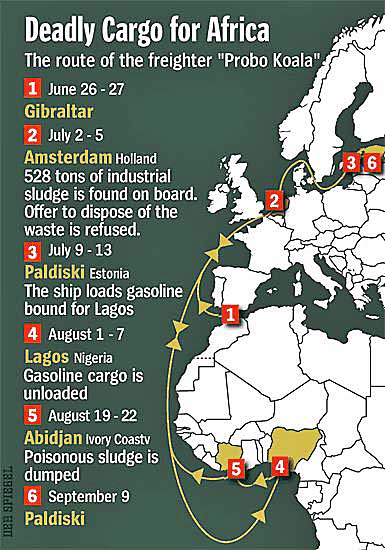 concentrations. Authorities halted the unloading of the waste. The captain of the ship, which was Greek-owned and registered in Panama, angrily turned down a proposal by APS officials to dispose of the waste properly at special facilities in Rotterdam. The cost would have been about $250,000, plus another $250,000 in contractual penalties for the ship’s likely delayed arrival at its next port of call in Estonia.

For executives at Trafigura, a Dutch oil trading company with annual sales of $28 billion, that cost was too high. Management decided to send the ship on its way.

Three days later, the Probo Koala set sail again, now bound for Estonia. Under international regulations governing the cross-border shipping of hazardous waste, German authorities should have been notified of the ship’s passage to German and Danish waters. Amsterdam port officials did send an urgent message to their counterparts in Paldiski, an Estonian port, informing them that a ship with a “suspicious cargo” was headed their way. The Probo Koala was also unable to get rid of its chemical soup in Paldiski, where it took on a shipment of gasoline bound for Africa. After unloading the gasoline in Nigeria, the Trafigura-chartered vessel arrived in the Ivory Coast in August. A company called Tommy, which had just been established in July, took delivery of the slop which the European ports had turned away.

The “Ivorian Chernobyl”: The Ivorian media was filled with speculation over the incident. Was Tommy established specifically for this deal? And did Trafigura play a role? Both Trafigura and members of the president’s family held shares in a company called Puma Energy, which awarded Tommy the contract to dispose of the toxic sludge the ship was carrying. Officials at Trafigura’s headquarters in the Netherlands have denied any involvement in Tommy.

Local papers came under pressure for reports on what they described as the “Ivorian Chernobyl.” Two journalists were arrested, along with seven employees of the waste disposal companies. Ivorian President Laurent Gbagbo, who may be involved in the waste scandal through his family members, promptly dismissed the entire government.

SPIEGEL has obtained a copy of a confidential fax the captain of the Probo Koala sent to his African partner company, in which he writes that the load was “not waste water from normal shipping operations,” but “chemical waste water” that exceeded allowable limits.

Records documenting the ship’s movement show that the Probo Koala spent a lengthy period of time this year off the coast of Gibraltar and the Spanish city of Algeciras, where it served as a sort of “bunker ship” for chemical wastes from other ships—a claim Trafigura has denied.

According to an analysis by experts at Amsterdam’s APS, the material’s characteristics suggested that it was waste material from refineries. Trafigura, however, has said the oil waste on the Probo Koala had accumulated in the ship’s lower tank after “multiple cleanings.” The chemical cocktail, says Trafigura, developed as a result of “the addition of too much soda.”

A trend in Europe: Whatever subsequent studies reveal, insiders are concerned about what is clearly a growing trend. Global trade will continue to generate waste scandals, says UNEP director Steiner, because “the smuggling of hazardous waste is becoming more and more lucrative.” Steiner wants to see his agency better-equipped to identify such “corrupt deals with deadly consequences” before they take place and to have “tough penalties” imposed on violators. The UN agency plans to send $13.5 million in immediate aid to the Ivory Coast.

The international environmental organization Greenpeace also fears that emerging nations and their often corrupt regimes are once again offering the industrialized world inexpensive waste disposal options. Although the practice had subsided somewhat in recent years as a result of various treaties, there are now growing reports of attempts to export toxic waste. This has prompted Gerd Leipold, Executive Director of Greenpeace International, to warn of a new “toxic waste colonialism.” As a number of recent cases illustrate, Leipold’s concerns are not unfounded:

Often masked as the exportation of “valuable goods,” large amounts of discarded computers, mobile phones and other electronic junk, as well as old cars and refrigerators are sent to Africaall filled with hazardous substances, some of which are highly toxic, including oil, fire retardants, dioxins and PCBs.

A toxic-waste incident of frightening proportions could already be in the making in war-torn Somalia on Africa’s eastern coast. The December 2004 tsunami also reached Somalia’s sandy coast, where it claimed about 300 lives. German aid organization Caritas provided humanitarian aid through its Somali partner organization, especially to the Somali fishermen affected by the giant wave.

Somalis took the Caritas aid workers to the beach to show them a strange discovery. The tsunami had exposed large tanks in the sediment off the country’s flat coast and pushed them ashore. The unlabeled containers of unknown origin are carefully welded shut. By knocking on the tanks, the workers discovered that they contained liquid.

Caritas hired Andreas Bernstorff, the former head of Greenpeace, to travel to Somalia, where he provided the local workers with protective suits. Initial plans to fill the tanks’ presumably toxic contents into other containers were abandoned. Instead, the workers temporarily encased the mysterious containers in fiberglass mats.

Citing “security reasons” stemming from Somalia’s civil war, UNEP declined to conduct an investigation. It is known that large shipments of toxic waste, especially from Italy and Switzerland, were taken to Somalia in the 1980s and may have been dumped off the coast. The matter can only be resolved by professionally drilling into the thick-walled tanks under stringent safety precautions. Nevertheless, any new information the tests could yield is unlikely to produce significant consequences after so many years.

But the Probo Koala case, on the other hand, has generated political pressure in the Netherlands, especially against Pieter van Geel, the Dutch State Secretary for the Environment, whose inspectors had certified the black sludge as relatively harmless “ship waste.” Under the current plan, Abidjan’s toxic waste will be recovered and burned in a French hazardous waste treatment facility.

Dutch investigators are not unfamiliar with oil trading company Trafigura, which was presumably behind the scandal. A court in Texas ordered the company, established in 1993, to pay penalties and repay profits of close to $20 million for breaking US laws and violating the embargo provisions of the “Oil for Food” program in Iraq.

A UN investigative commission also believes that Trafigura paid large sums of money to the son of UN Secretary General Kofi Annan, Kojo. In the current case, the company insists “the cargo was properly disposed of.” Nevertheless, say company spokesmen, Trafigura is “concerned” over “residue from the petrol cargo” in the Ivory Coast.

Story first appeared in Der Spiegel. Translated from the German by Christopher Sultan.