HANOI, VIETNAM – 2014 was a critical year for Africa’s remaining rhinos. A record 1,215 were killed for their horns, 10 times the number killed in 2009. Last year also saw the largest investment in anti-poaching efforts – $40 million – with funds going into purchasing high-tech helicopters and night vision equipment.

It was also the first year of a three-year campaign run by conservation group WildAid to reduce rhino horn demand in Vietnam, a country that, along with China, is fueling the destruction of the species because of a belief that the horn, which is made of the fibrous protein keratin, can cure an array of ills from hangovers to cancer.

At an event Friday sprinkled with celebrities and government representatives in the capital, activists discussed how to reverse the trend. Hong Hoang, director of local NGO Change, said she was hopeful the use of famous singers and actors could get the message to “stop the buying, stop the killing” across to consumers.

Hoang said it was important to change Vietnam’s reputation as a destination for rhino horn. 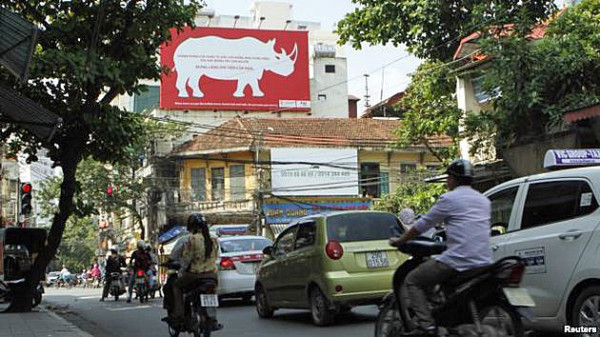 The target markets are businessmen who earn more than $50,000 a year, government officials and those who drink rhino horn as a hangover cure.

Demand outstrips supply, with 75 percent to 90 percent of rhino horn on the market believed to be fake, Hoang said.

That said, of 400 people interviewed in a survey commissioned by WildAid in late 2014, no one admitted having purchased rhino horn before.

Either they will not admit it or the number of people surveyed did not get the right individuals, said WildAid managing director John Baker.

“It doesn’t take that many people to buy 1,000 rhino horns when you’re in a country of 90 million,” he said. “So the other thing is we think there are more people buying it than that survey indicates. It’s probably not large in a percentage sense, but even 1 percent of 90 million is a lot.”

Seventy-five percent of respondents said they believed rhino horn had health benefits, and 37.5 percent thought it could cure cancer. When told that the animals have to be killed for the horn or that they would be extinct in the next 10 years, nearly all said they would not buy the horn.

The problem, however, is not just about who is buying the horn, but who is selling it. A pound of rhino horn sells for nearly $30,000. The illegal trade is big business.

The attitude of the Vietnamese government is clear, Le Duc Binh of Vietnam Customs said.

He said customs officials had arrested many traders. Also, Prime Minister Nguyen Tan Dung issued a directive in 2014 to protect wildlife, and two sniffer dogs are being trained to detect wildlife products at Hai Phong port in September.

WildAid’s Baker said he hoped this would be extended soon.

“We hope that if they’re serious, they would allow us to do it in the two main airports,” he said. “Right now, they want to do a trial project in Hai Phong port. I think we need to do it in the two airports, hopefully sooner than later. Then the other goal is to communicate about it, show pictures in the newspaper that people are getting arrested.”

Baker said more needs to be done to stop the smuggling.

“You would see a difference if there were more prosecutions, if there were more arrests and more confiscations of smuggled rhino horn, but we don’t see that many reports of that,” he said. “So I think there could be a stronger enforcement effort.”

Baker said it was now a matter of how the government will implement its measures and improve its record on enforcing the law.