By Stephanie Kirchgaessner in Rome and agencies, Thursday 16 April 2015, The Guardian (UK)

Police in Sicily have arrested 15 people for allegedly throwing 12 migrants overboard during what appeared to be a Muslim assault against Christians on the high seas amid Italy’s migration crisis. Palermo police said in a statement on Thursday that they learned of the incident while interviewing tearful survivors from Nigeria and Ghana who arrived in Palermo on Wednesday morning after being rescued at sea.

The survivors said they had boarded a rubber boat with 105 passengers aboard on Tuesday on the Libyan coast. During the crossing, the migrants from Nigeria and Ghana, believed to be Christians, were allegedly threatened with being abandoned at sea by some 15 other passengers from Ivory Coast, Senegal, Mali and Guinea-Bissau. The statement said the motive was that the victims “professed the Christian faith while the aggressors were Muslim”, Associated Press reported. 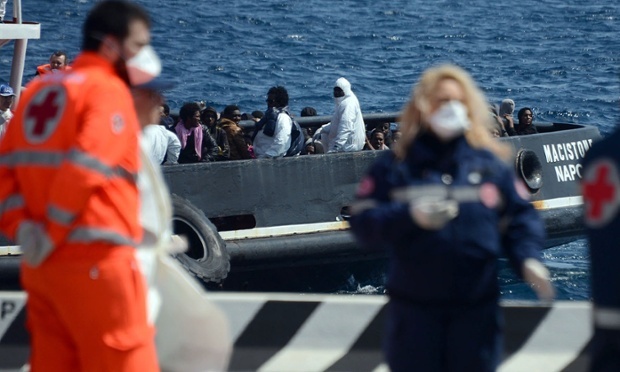 Maurizio Scalia, the prosecutor in the case, will have another 48 hours to validate the arrests. Asked about the reports of religious prejudice having played a role in the deaths, one expert who has worked in the field for eight years said he had never heard of such an incident in the past, even though most migrant boats usually carry people from different religious backgrounds and nationalities.

Flavio di Giacomo of the International Organisation for Migration  said fights on migrant boats have occurred in the past – with some including people being killed – but were exceedingly rare and were sometimes the result of a “battle for survival”. Last July, he said, a fight broke out between passengers on a migrant ship, some of whom were in the hull of the boat and wanted to get on deck. Passengers above deck did not want to disturb the equilibrium of the boat and a fight ensued, with “some victims”.

There are differences in how certain nationalities are treated by smugglers, Di Giacomo said. He noted that Libyan smugglers often viewed sub-Saharan Africans as “less valuable” than other passengers and they were often forced into the hulls of boats making the trip to Italy from Libya. “That’s the most dangerous part of the boat,” he said. Syrians were, however, allowed spots on the deck and could purchase lifejackets, a luxury that was not always offered to sub-Saharan Africans.