HARARE  – Thirty five years ago, Zimbabwe won independence from the British colonial rule and the black majority was overwhelmed with joy and had high hopes.

Today, while the independence celebrations are being held under the theme “Consolidating Unity, Peace and Economic Sovereignty,” Zimbabweans no longer speak with one voice and the country is divided and politically polarized.

Supporters of the ruling ZANU–PF party are rejoicing and identifying with the twitter harshtag #1980 SO FAR SO GOOD as a reflection of achievements since independence. “There is every reason for me to celebrate Independence Day,” Simbarashe Ngarande, 36, told The Anadolu Agency. “I am an entrepreneur who owns a fleet of commuter omnibuses plying several routes in Harare,” he explained. “So, to me indeed it is so far so good.” 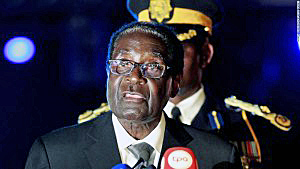 Soon after independence, the ZANU–PF embarked on an exercise that empowered Zimbabwean citizens in terms of quality health and education. The ruling party introduced an “education for all” policy which resulted in Zimbabwe only second to Tunisia with a literacy rate of more than 90 percent of the population. More schools, tertiary colleges and universities were built and the country presently has 11 universities.

In terms of health, the government made sure through donor funds that each district had a major hospital. This is in addition to other liberties such as freedom of movement and association, which were not supported under the colonial regime. “Apart from economic empowerment and land that we got through our leader President Robert Mugabe, we have stability in Zimbabwe,” Wellington Peyama, a staunch ZANU–PF supporter, told AA. He insists that Zimbabwe is one of the few countries led by a liberation movement that has not witness a military coup.

But other Zimbabweans are not so impressed by what the country has achieved 35 years since independence. “There is nothing to celebrate because of the economic hardships people are facing at the moment,” Rashid Mahiya, who is based in capital Harare, told AA. “Jobs are scarce, companies are closing and the cost of living is very high,” he lamented. Zimbabwe currently uses a multicurrency system, which is dominated by the U.S. dollar and the South African rand.

Introduction of the system was necessitated by hyperinflation – estimated at more than 500 billion percent – that eroded the value of the Zimbabwe dollar a few years back, forcing citizens to abandon the local currency. The runaway inflation had caused severe hardships for everyday Zimbabweans. At the time, supermarkets stood empty and food availability became a major concern. Many Zimbabweans – seeking greener pastures – crossed the border into neighboring Botswana and South Africa.

“I think the government has just managed to expose its nakedness and they should be reminded that poverty is the mother of all revolutions,” Maureen Kademaunga, 32, told AA. Stabile Dewa, 29, has two degrees and still cannot find a job. “Zimbabwe’s unemployment rate is more than 90 percent and I am one of those affected,” she told AA. “This is the reason why we find millions of Zimbabweans in diaspora, especially South Africa where they are experiencing xenophobic attacks,” lamented Dewa.

Zimbabwe used to be known as a regional “breadbasket” before embarking on a controversial land redistribution program in 2000. Mugabe defended the policy, saying it had been meant to redress the British seizure of fertile farmland in the late 19th century. The country’s agricultural production has since slumped to its lowest level since it won independence. Zimbabwe has ended up importing grain from neighboring countries – including South Africa, Zambia and Malawi – to meet domestic demand. At one point, UN development agencies began providing assistance, including technical agricultural support.

Many also cite restrictions on political freedoms, and argue that peace and stability in the country are the result of fear and intimidation. “We cannot say we have independence in Zimbabwe when one of us is missing,” Simba Makoni, a former ruling party member and now an opposition leader, told AA. “Those who are supposed to maintain peace are the ones perpetrating violence against ordinary citizens,” h charged.

Makoni was referring to the abductions of opposition members in Zimbabwe, the latest victim being journalist and activist Itai Dzamara. Dzamara – the leader of a pressure group called “Occupy Africa Unity Square Gardens,” which calls for the resignation of 91-year-old Mugabe – was abducted while having his hair cut near his home. The country’s opposition and civic organizations believe the abductors were state security agents, which the government denies.

In 2008, 21 activists were abducted in different parts of Zimbabwe. Weeks after their initial disappearance, they were brought to court, where they were charged with plotting to depose Mugabe, who has ruled Zimbabwe since independence. The courts refused to prosecute the activists, however, saying their rights had been violated, noting that they had been denied access to medicine, food and legal representation while in custody.

“Actually there is nothing to celebrate on Independence Day because most of those in ZANU–PF are there to suppress others through unlawful means such as abductions and violence,” Claris Madhuku, the director of Platform for Youth Development, a local NGO, told AA. Opposition leader and former premier Morgan Tsvangirai said there was little to celebrate on Independence Day.

“The tragedy of our liberation is that only political independence came, without the basic freedoms that many had fought and died for,” he said in a statement. The EU suspended aid to Zimbabwe in 2002 following reports of human rights abuses, election rigging and voter intimidation by the ZANU–PF government. It resumed direct engagement with Zimbabwe in November of last year.

Zimbabwe’s economy is this year seen contracting by four percent, weighed down by weak mineral prices and poor foreign direct investment flows, research by a brokerage firm has shown. Government and the World Bank have projected a 3.2 percent growth this year premised on stability and higher mineral prices. But Invictus, in its latest research paper, warned that the economic outlook was bleak because of the underperformance of the country’s economic drivers–agriculture and mining.

“Zimbabwe’s short-term economic outlook is bleaker now than at any time since the hyperinflationary meltdown of 2007/8. “Real GDP will fall this year by at least three percent and the outturn could be much worse depending on the 2015 harvest and outlook for key commodity prices, including tobacco, base and precious metals,” said Invictus. “We expect GDP to decline by four percent in 2015 reflecting lower commodity prices and lower than expected agricultural output.

“The lack of domestic liquidity combined with poor FDI flows will continue to have a negative impact on growth.” The slowdown in growth in 2014 and 2015 reflects greater structural issues such as trends in investment, employment, living standards and poverty that needs to be addressed, it added. Official figures show that Zimbabwe has lagged regional peers in FDI, with neighboring Zambia receiving $8 billion in FDI between 1980 and 2013, Mozambique $16 billion but only $1,8 billion for Zimbabwe.

“In Zimbabwe agricultural output, which grew some 20 percent in 2014 and kept the economy out of recession for most of the year, will fall sharply this year. Mining and manufacturing will decline modestly as will retail activity,” said Invictus. “The tobacco outlook is poor – a combination of a smaller crop, lower prices and the 2014 overhang of leaf bought by merchants but not yet sold on to export markets.

Japan has donated $1,5 million to support a UN World Food Programme (WFP) relief operation to help people facing food shortages owing to drought that ravaged most parts of the country. In a statement, Japanese Ambassador to Zimbabwe Mr Yoshinobu Hiraishi said the donation would go a long way in helping vulnerable people in Zimbabwe improve their livelihoods. “Japan is pleased to be able to make a contribution to WFP. We hope this will help bridge the current food gaps as well as strengthening people’s resilience against future food shortages,” he said.

The WFP will use the money to buy food for vulnerable households in drought-prone parts of the country. WFP country director Mr Sory Ouene hailed the assistance. “Japan’s contribution comes at a critical time. Not only will it help us meet people’s immediate needs, but it will enable us to provide vulnerable people with the means to work their way out of food insecurity and build a future free from hunger,” he said.

The WFP official said Japanese support would enable the UN agency to commence food aid operations in the worst affected parts such as Zvishavane and Mwenezi. Food aid operations, he said, would start next month and vulnerable people would either be given food or cash while they work on irrigation or water harvesting schemes that would give them an income as well as the resources to better withstand shocks associated with climate change. The Government of Japan is one of the largest donors in Zimbabwe.

Since 2010, it has provided more than $43 million of humanitarian and development assistance through WFP and other agencies. The food security situation in Zimbabwe and the region is expected to be less than satisfactory as a result of poor rains in most parts of the region, dry spells in some areas, and floods in others. Former Commercial Farmers Union president, Charles Taffs, has warned government against turning everyone into a “farmer” saying doing so was inviting “disaster”.

Taffs, who was speaking at the official launch of a new agriculture development company, African Farming Solutions, in Harare Thursday, said farming should be left to farmers if the country was to once again become the bread basket of the region. “Not every citizen is a farmer and for real food security to be achievable farming must be left to farmers both small and large,” Taffs told delegates comprising former white commercial farmers, industrialists and politicians.

“Farming must be done professionally and to do otherwise is to promote poverty and perpetual dependency; and we must move away from this phenomenon”. Once the bread basket of the region, Zimbabwe is now seen as a basket case following the haphazard land redistribution programme embarked on by President Robert Mugabe’s government from 2000 onwards. Under the controversial land reform programme, experienced former commercial white farmers were replaced by inexperienced black farmers.

Since then, Zimbabwe has been failing to produce enough to feed its own people and depends on importing cereal and maize from neighbouring countries. Taffs, who is the Chief Executive Officer of the newly formed African Farming Solutions, said Zimbabwe was failing to feed its people because of lack of modern farming methods on the part of the “new” farmers who continue to practice subsistence farming on commercial lands.

“Food security does not necessarily mean growing food for your family at a domestic level. “We must move away from the notion that all farmers or families must grow maize,” he added. “We must acknowledge that for Agriculture to become diverse, successful and sustainable there must be a combination of both large and small producers alike and to develop one at the expense of another is to invite disaster”.