ANY move by Burundi’s President Pierre Nkurunziza to run for a third five-year term risks undermining the Arusha peace deal that has kept the country calm since civil war ended a decade ago, and could stoke tension in a region blighted by ethnic conflict. Mr Nkurunziza has yet to say whether he will stand in the June 26 vote, but diplomats and opponents expect him to run even though they say it would violate the constitution and the pact. 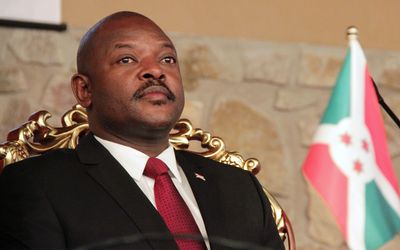 The ruling party argues his first term does not count as he was chosen by legislators and not voted in. It could nominate Mr Nkurunziza, a 51-year-old whose voting strongholds are in the countryside, at a party congress on Saturday. “If he decides to run for a third term, he will be opening doors for another war,” says prominent rights activist Pierre Claver Mbonimpa, who has often found himself in jail for his antigovernment activism. “This will be a coup d’état against the constitution, against the Arusha peace agreement.”

The Arusha pact ended a civil war that killed 300,000 people. In the nation of just 10-million people, almost everyone counts a victim in their family. Any flare-up threatens broader repercussions. It could draw in next-door Rwanda, victim of a 1994 genocide, and create turmoil in an area where term limits approach other presidents, such as Joseph Kabila in neighbouring Democratic Republic of Congo. His second term ends next year.

“Arusha created the preconditions for Burundi to be peaceful. Take it away and anything might happen,” says one senior Western diplomat, adding Mr Nkurunziza seems determined to ignore pressure to step down. The Arusha pact set power-sharing quotas between the Hutu majority and Tutsi minority, which once ruled the nation and dominated the army. The deal gave Hutus the biggest say but ensured Tutsis still had a strong voice and so felt safe. That balance could be put to the test if Mr Nkurunziza, a former Hutu rebel leader, stands again.

“The presidency is well aware unity is key for stability,” presidential spokesman Gervais Abayeho says. “Minority groups should not be worried.” Despite struggling to develop its poor agrarian economy, Burundi has been praised for healing deep rifts, largely by acknowledging differences. But mounting tension or clashes could split the army, transformed from a Tutsi-led force to one that absorbed rival ethnic militias. Some soldiers might find loyalties strained if ordered by the government to intervene.

Opposition politician Agathon Rwasa, who also once led a Hutu rebel force, says the army could “divide itself into blocks” in that situation. He says he will call for protests if Mr Nkurunziza runs again.