The opposition ODM party Thursday accused President Uhuru Kenyatta and his deputy of “dancing on the graves of Kenyans”, and accused the government of failing to guarantee the security of Kenyans. Speaking just three days after 56 people were killed by bandits in Nadome, a remote area on the boundary of Turkana and Baringo counties, ODM chairman John Mbadi demanded that Mr Uhuru and Deputy President William Ruto show leadership from the front and avoid “retreats and warnings”.

On Wednesday, Interior Cabinet Secretary Joseph Nkaissery said he would send a joint military and police team to secure the area, disarm armed herders and arrest those behind the killings believed to have been sparked by a county boundaries dispute. Yesterday, the Deputy Commissioner of Police, Ms Grace Kaindi, flew to Nadome to visit the affected families as the joint security team embarked on hunting down the men who gunned down the villagers. Among the victims were 11 children and women. 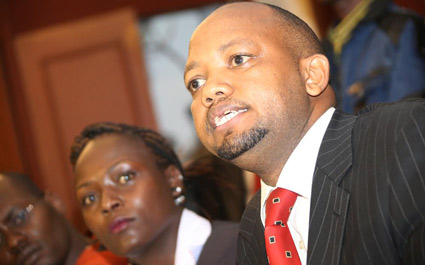 North Rift Peace Caravan leader Raphael Lenaiyara and other members address journalists in Nairobi on May 7, 2015. They accused the government and political leaders of failing to end the killings in the region. BILLY MUTAI | NATION MEDIA GROUP

“Mr President, give us back our country,” ODM said in the statement signed by Mr Mbadi, who was accompanied to a press conference by Suna East MP Junet Muhammed. “Mr President, our country is shrinking under your watch. We are losing the North Rift to bandits.” They accused Mr Kenyatta and Mr Ruto of showing “no heart” despite the killings in Kapedo, Garissa and now Nadome and Loyangalani, where another 13 people were killed on Monday. “And what do we hear? That the President and his deputy are going to the South Rift to defuse rebellion against the DP and woo people to JAP,” said the legislators.

Meanwhile, West Pokot Senator John Lonyangapuo was Thursday served with orders to appear before criminal investigation officers for questioning for allegedly being involved in a crime. However, Prof Lonyangapuo sought to know how the police officer who delivered the summons was allowed within parliamentary precincts. “The notice was served on me immediately upon exit from the Chamber, at the doors of this Chamber,” Prof Lonyangapuo said in a personal statement to the Senate.

The Senator said the summons indicated that he was being investigated in a case of robbery with violence contrary to section 295 as read with section 296 (2) and stock theft contrary to section 278 of the penal code. He is expected to appear at the Divisional Criminal Investigations Headquarters at Mazingira House in Nairobi today. It was not clear whether the case is related to the Nadome attack.

In a related case, the survivors of Monday’s attack yesterday gave chilling accounts of their ordeal at the hands of the ruthless bandits. They said that the over 400 attackers also stole more than 1,000 cattle and 5,000 goats during the raid that lasted over 10 hours. Police later said some of the goats were intercepted as they were being taken to a livestock market. Mr Saban Tion, a Kenya Police Reservist, counted himself lucky as he was among the first to respond when the bandits struck.

“When we heard the gunshots, we rounded up women and children and engaged the attackers in a fierce shoot out. As we speak, I don’t know the whereabouts of my three colleagues,” he said as he showed the Nation team where a bullet was lodged in his body. Although the men managed to save the lives of some of the women, not all were lucky. Mrs Chemkot Nareger, who used to live in Kauto village, was among those who were shot dead, together with her four children and a neighbour identified as Ms Chebonot Freedom and her two children.

Local leaders, included two members of the Baringo County Assembly, Mr Nelson Lotela (Silale Ward) and Daniel Tuwit (Ribkwo/Kositei) condemned the killings and called on the county government to set up a special unit to deal with cattle rustling. “This will help deal with the specific problem of cattle rustling and address its root cause. This should comprise the locals who are conversant with the terrain of the area,” said Mr Lotela.

He wondered why the government failed to hire Kenya Police Reservists in Tiaty Sub-County. Lack of armed reservists, he said, was to blame for the vulnerability of the local community because their traditional enemies were armed. He called on leaders from the rival communities that live on the boundary of the two counties to be at the forefront in preaching harmony instead of making remarks likely to aggravate the tension.