Huiyun Feng: Just how likely are China and Russia to ally against the U.S.? The rising tensions between Russia and the West, especially the United States, over Ukraine provide a constant reminder of the Cold War, when the two superpowers fought proxy conflicts for spheres of influence. A key question in the current game of great power politics is whether China and Russia will form an alliance against the United States?

If Washington pushes too hard on oil prices, Ukraine, and NATO expansion toward Russia, and if the U.S. rebalances too far against China in the Pacific, China and Russia may indeed move towards a formal alliance, even if that may not have been what they originally wanted.

One Mountain, Two Tigers: Both Chinese President Xi Jingping and Russian President Putin are strong leaders with aspirations to recapture past glories. Xi’s new foreign policy features strong positions over the East China Sea disputes with Japan and the South China Sea disputes with Southeast Asia. As the world has witnessed, Putin has been aggressive over Crimea and eastern Ukraine. Both Xi and Putin believe that their states were unfairly treated in the past and are uncomfortable with the current international order.

However, these similarities do not suggest that the two leaders will simply stand together. As the old Chinese saying goes, one mountain cannot contain two tigers. Although both Xi and Putin are pursuing national rejuvenation, the two nations have historically not gotten along. Although neither Xi nor Putin like the Western world order led by America, they do not share a common vision of a so-called new world order.

In particular, Beijing did not bend to Moscow even during the Cold War when both states belonged in the communist camp. Although facing tremendous economic difficulties caused by Western sanctions after the Ukraine crisis, the Russians have made it clear that what they need is China’s diplomatic support and not economic assistance. Even though both countries face domestic ethnic challenges, in Chechnya and Xinjiang respectively, when it comes to the 2008 War in Georgia, China’s lukewarm position due to its own concerns over Taiwan, Xinjiang and Tibet has made some Russians uncomfortable. Even though Xi and Putin might be in the same bed against the West, their dreams are clearly different. 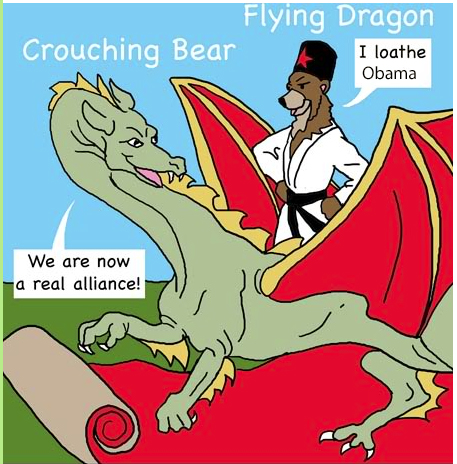 Trade Imbalances and Strategic Ramifications: Economic ties are a key factor in the China-Russian relationship. Bilateral trade has been rising steadily, reaching $95 billion in 2014, very close to the $100 billion goal set for 2015. In 2014, Russia signed a thirty-year, $400 billion deal that will see as much as thirty-eight billion cubic meters of Russian gas go to China annually from around 2018 to 2047.

However, even the strongest ties between the two countries are problematic in nature. First, China-Russia trade remains highly imbalanced for it is limited to mainly three items: oil, gas and arms. The EU is still Russia’s leading trading partner while the U.S. is China’s (if Hong Kong is excluded). Although China is Russia’s second largest trading partner, Russia only ranks eighth forChina, with just 2 percent of China’s total trade volume. In other words, although both China and Russia may despise the West, China cannot sacrifice the U.S. market, and Russia can’t give up on Europe.

Second, the energy deals between the two nations are not really a “win-win” situation because of mutual concerns over their relative gains. It seems that Western economic sanctions against Russia have pushed Russia to seal energy deals with China, which in return met China’s booming needs for energy and resources. However, both countries understand that overdependence means potential vulnerability.

China has tried to diversify its oil supply by stepping up its economic cooperation with Central Asia, traditionally Russia’s backyard. Russia has also sought to expand its energy market with other Asian countries, such as Japan, India, Mongolia, South Korea, and Vietnam (even North Korea). Intentionally or not, Russia’s energy cooperation with some Asian countries somehow made China uncomfortable strategically. For example, Russia’s 2012 energy deal with Vietnam in the South China Sea, where China has claimed its undisputed sovereignty, was seen as a “stab in the back” by some Chinese analysts. In the same vein, Russia has deep concerns that China’s “silk road economic belt” across Central Asia will undermine Russia’s geopolitical influence in Eurasia.

Last but not least, Russia’s arms trade with China. Certainly, Russia is China’s most important supplier of weapons and military technology, but it is an open secret that Russia has been hesitant to transfer advanced military technology to China–a potential competitor. The S-400 missile system deal in late 2014 is widely seen as a practical financial decision instead of a strategic one. Russia’s military cooperation with China’s neighbors, such as Vietnam, entails strong deterrence and balancing ramifications toward China in the South China Sea. For example, Russia has sold three kilo-class submarines to Vietnam since 2009, which are more advanced than the vessels China obtained from Russia.

Irreconcilable Identities: China is an Asian power with global ambitions. Russia has historically defined itself as a European power, although it recently started its own pivot toward Asia. The two nations share a bitter and bloody history. After the Cold War, though, they seemed to find new chemistry in defending against U.S. hegemony. China and Russia established a strategic partnership in the late 1990s while the U.S. was extending its unipolar system. However, the strategic partnership between China and Russia was widely seen as an “axis of convenience,” with only symbolic gestures as both countries kept an eye on improving relationships with the United States even as they made public pledges against the hegemon. In other words, the so-called strategic partnership between China and Russia is simply a diplomatic tool for both nations to compete for more attention from the United States after the Cold War.

Even in the post-unipolar moment, China and Russia remain competitors rather than true partners.  As a rising power, China is gaining more international say and influence, while Russia seems to be losing same, as was seen at the recent APEC and G20 meetings in 2014. Although both countries are having their issues with the West right now, sooner or later tensions will rise between them. Their uneasy relations within the Shanghai Cooperation Organization (SCO) suggest the potential for strategic and economic competition in Central Asia and the even deeper problem of their irreconcilable interests over regional domination.

Three to Tango?: As always, power politics is still the major game in town. Another chapter in the rise and fall of the great powers – this time played by the United States, China, and Russia – has just opened. It is too early to categorize China-Russia relations as either a “partnership” or an “alliance,” because there are no permanent friends in world politics, only permanent interests. Despite the positive trends, the bilateral relationship still lacks a solid foundation of mutual trust and common identity. Only a strong common threat from the West could push China and Russia to move closer economically and militarily. This is in the hands of U.S. policymakers. Continue to prod Xi and Putin and they may indeed see a military alliance or at least a close partnership between Beijing and Moscow.

To avoid, the United States needs to consider how to re-set its relationships with Russia and China. For Russia, isolation and sanctions might not be the solution for the Ukraine crisis. For China, the U.S. needs to reconsider its Asia rebalance. Xi will visit Washington in September [2015], a good opportunity for some relationship building. Although furious competition among the United States, China and Russia is probably inevitable, a delicate balance of power is the essence of diplomacy. In the context of world affairs, it may take three to have a peaceful tango.

Huiyun Feng is senior researcher at the Danish Institute for International Studies and Associate Professor of Political Science at Utah State University. She is the author of Chinese Strategic Culture and Foreign Policy Decision-Making: Confucianism, Leadership and War (Routledge, 2007) and the co-author of Prospect Theory and Foreign Policy Analysis in the Asia Pacific: Rational Leaders and Risky Behavior (Routledge, 2013)