Asmara (HAN) May 10,2015, By Yemane Abselom—Eritrea has had a long history of mining industry starting with colonization period when Italy had established mining industry at Karora, Debarewa, and Augaro. After independence, the government of Eritrea passed a mining law that fosters a favorable environment for foreign investment in the sector knowing full well it could play a crucial rehabilitating role in its war devastated economy.

Eritrea has many benefits it can offer potential investors. It has a safe and stable government with an educated and disciplined work force; its strategic location along the Red Sea has an added benefit to investors. As such, Eritrea has attracted close to 17 exploration companies from all over the world. Companies from China, Russia, UK and Australia, to name just a few, have several companies in Eritrea that are participating in its mining sector.

Eritrea’s mining law, while fostering a favorable environment for investors, also ensures that the Eritrean people receive their fair and equitable share. The people of Eritrea through their government are partners in each mining ventures. For example, the Colluli potash exploration project in the Danakil Depression in South East Eritrea is a 50:50 joint venture between South Boulder Mines (ASX: STB) and the Eritrean National Mining Company (ENAMCO). The mining laws include monitoring and strict adherence to internationally accepted practices. As such, Eritrean mines have one of the best safety records in the world. In addition, mining in Eritrea is anchored in laws that are designed to protect the environment. Eritrea doesn’t want to punish future generations with careless mining practices. 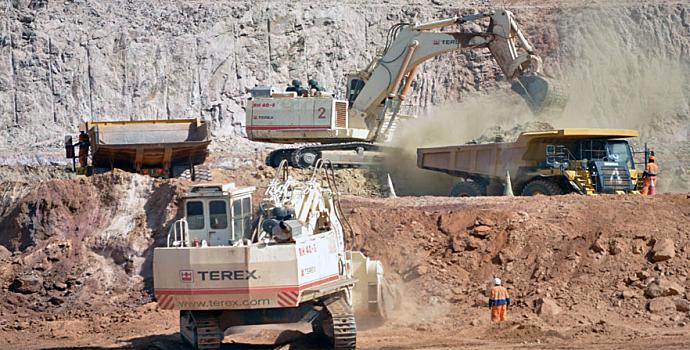 If you have been lucky enough to visit Eritrea and roam outside the capital city, you have most likely walked over some kind of precious metal. The government of Eritrea’s geologic map of 1:1,000,000 scale covering the whole country shows that about 60% of the Eritrean landmass is covered by sedimentary rocks that tend to host metallic minerals. These metallic minerals include gold, silver, copper, zinc, barite, limestone, granite and rare earth metals like tantalum and much more. Gold, silver, copper and zinc have been found in almost all parts of the country.

Exploration activities in the last decade have shown the presence of gold deposits in the western lowlands (Bisha and Harena), South and Southwestern lowlands (Shillalo), Central highlands (Debarwa and Adi Nefas), and in the northern part of the country.

Eritrea is currently in the production and distribution phase on several minerals. Its 1,200 km coastline has large deposits of common salt (NaCl) that has been in production for decades. Large quantities of high quality “silica” are found at Merbet, which are being used for glass manufacturing. Black and gray marble and granite around Dekemhare have been used as construction materials for many years. A Canadian Company, Nevsun Resources Ltd (AMEX: NSU), has finished gold production in 2013; at the moment is extracting copper while making preparation to extract zinc; all these from its single pit at Bisha. The Zara Mining Share Company run by the Chinese company SFECO is expected to become Eritrea’s next gold producer in 2016, followed by Canada’s Sunridge Gold Corp (TSX: SGC). Also in 2016, an Australian company, South Boulder Mines, Ltd. (ASX: CHN) is supposed to produce potash, a precious mineral used in fertilizers. Other companies are also at various stages and should be producing results in the near future.

Eritrea’s mining sector has even greater potential. The Arabian-Nubian Shield has shown potential for rare earth metals like Tantalum. Tantalum is used in electronic equipment such as mobile phones and video games. In addition, Eritrea’s Red Sea coastline has shown a very good indication of hydrocarbons, which are markers for oil and gas. In addition to these the Red Sea Rift area has a strong geothermal potential that can be exploited for power generation.

Eritrea’s 24 years of independence have been marked by war, drought, sabotage from within and outside, unfair and illegal sanctions, illegal occupation of its territories and unwarranted hostilities by a US-lead west. Despite it all, Eritrea’s government has used its fair share of mining revenue for the benefit of all Eritreans by focusing on projects that benefit all. Eritrea pins its hope not on gold or silver, but on its even more precious and priceless resource: its children.

Eritrea’s achievements in the last 24 years in providing health and education services, in water conservation, food security, and infrastructure development indeed has been remarkable and its promise is inspiring. Happy 24th Independence. Tesfanews 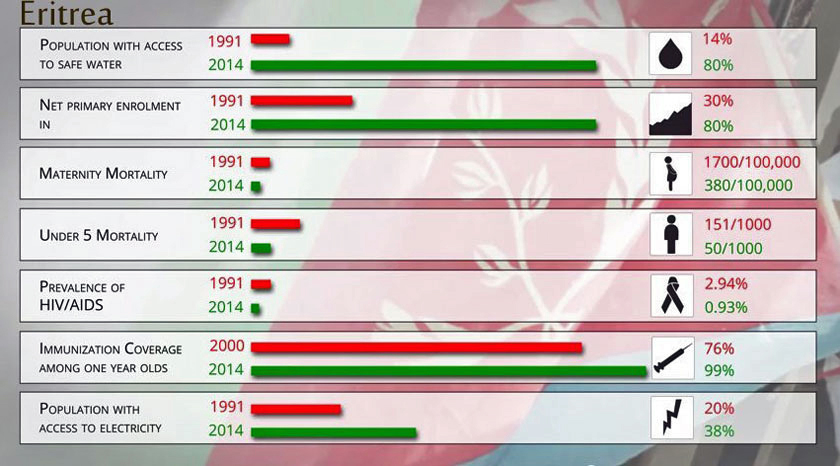 Some of Eritrea’s success stories in figures. Encouraging but not yet enough.