“Given that Egypt’s present strategy is to boost its cooperation with Nile Basin states in various fields, it is keen to participate in the Nile Basin meeting to present its vision for a mechanism of cooperation among member states in the future.”

So said Minister of Irrigation Hossam Moghazi this week, stating that Egypt will participate with a high-level delegation in Thursday’s two-day meeting in Dodoma, Tanzania, which will be attended by ministers in charge of water affairs in the Nile Basin countries.

Egypt’s participation in the 23rd annual meeting of the Nile Basin countries comes in line with its foreign policy that aims to establish diverse and strong relations with other countries, giving priority to Nile Basin and African states, a diplomat who preferred anonymity, said.

“Although this meeting will not have a direct impact on the differences regarding building the Grand Ethiopian Renaissance Dam, it will indirectly contribute to improving relations,” the diplomat said. “Opening more channels of cooperation may help in taking the dam’s Declaration of Principles signed in February by Egypt, Sudan and Ethiopia to a more comprehensive water sharing agreement between the three countries,” he said. 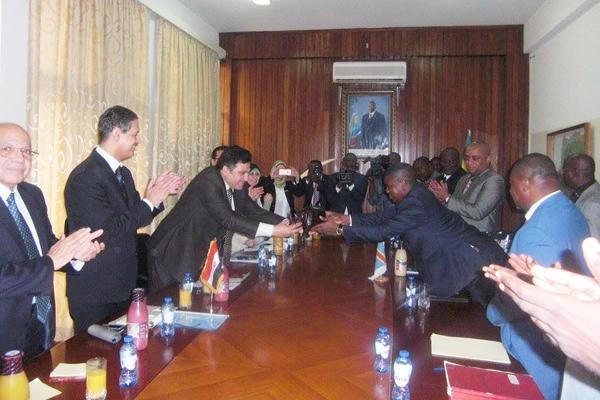 During the Nile Basin meeting, ministers will deliberate the status of the Nile states’ cooperation and how to move it forward. They will also review progress made by the Nile Basin Initiative (NBI) in the previous fiscal year, discuss the plans and budgets for the coming year and provide strategic guidance.

However, Moghazi said Egypt’s participation did not mean that it had changed its stance. Egypt has boycotted the Nile Basin meetings since 2010 in protest at the signing of the Entebbe Agreement by some Nile Basin states. Cairo and Khartoum opposed some of the accord’s articles.

The agreement seeks to re-allocate the sharing of the Nile waters — contrary to past agreements — to see whether the decision making process should be passed unanimously or by majority, and to set rules for notification on planned water resources development projects of member states.

The Entebbe Agreement was signed by Ethiopia, Rwanda, Tanzania, Kenya and Uganda in May 2010. Burundi signed it one year later. Ethiopia and Rwanda ratified the agreement in 2013and Tanzania did the same early this year. Following the signing, Egypt and Sudan froze their activities in the NBI.

He said that Egypt’s participation after boycotting the meetings for five years aims to allow it to present its views on the future of relations among the Nile Basin countries along with amendments on certain items in the Entebbe Agreement.

Today’s meeting will witness a change in the top leadership of NBI, with the position of chairman of the Nile Council of Ministers moving from Sudan to Tanzania. Accordingly, the current chairman, Sudanese Minister of Water Resources and Electricity Moataz Musa, will hand over to Jumanne Maghembe, Tanzania’s minister of water.

The NBI, established in 1999, is a partnership among the Nile riparian states that seeks to develop the river in a cooperative manner, bring about socio-economic development, minimise resource-based conflicts, and help change the lives of millions of people living in poverty in the Nile Basin countries.

It also promotes and encourages dialogue among member states, which is why it regarded the signing of the agreement on the Declaration of Principles regarding the Renaissance Dam a milestone in the history of cooperation on the Nile.

The Grand Ethiopia Renaissance Dam is a multi-billion dollar mega project on the Blue Nile River in Ethiopia with a capacity to generate 6000 megawatt.

Water sharing was agreed in the 1929 and 1959 treaties. The first treaty signed during the colonial era between Egypt and Great Britain gave Cairo and Khartoum the right to veto projects in the upstream countries that would affect their share of water.

The River Nile, 85 per cent of whose water comes from Ethiopia, is a lifeline to over 90 per cent of Egyptians. The Blue Nile on which the dam will be built provides Egypt with nearly 85 per cent of its water.

Egypt’s Foreign Minister Sameh Shoukri conducted two tours on the African continent last month. The first took him to South Sudan and Eritrea and the second to Djibouti and Uganda. He also visited Nigeria towards the end of the month to take part in the country’s presidential inauguration.