The ruling National Congress Party and opposition parties, two of which signed an alliance in August, remained deadlocked over a national dialogue process that was to pave the way for elections and a new constitution. Sudan has yet to adopt a constitution after the Comprehensive Peace Agreement’s six-year interim period ended in 2011 and South Sudan became independent.

Conflict and Abuses in Darfur: Fighting between government forces and rebel groups, and between other armed groups, often using government equipment and weapons, continues in several parts of Darfur. Conflict between the Rizeigat and Ma’aliya groups in South Darfur killed hundreds. More than 450,000 people have fled violence in Darfur since the beginning of 2014, according to the United Nations Office for the Coordination of Humanitarian Affairs.

Starting in February, the Rapid Support Forces, a Sudanese government force consisting largely of former militias, moved into Darfur from the Kordofan region, where they had been deployed to fight rebels in Southern Kordofan. The forces, led by the Darfuri former militia leader, Brig. Gen. Mohammed Hamdan Dagolo (“Hemmeti”) carried out massive ground attacks on dozens of villages in South and North Darfur, targeting areas where they accused the population of sympathizing with rebels. They burned homes and shops, looted livestock, killed and robbed civilians, and forced tens of thousands of residents to flee to towns and camps for displaced people. 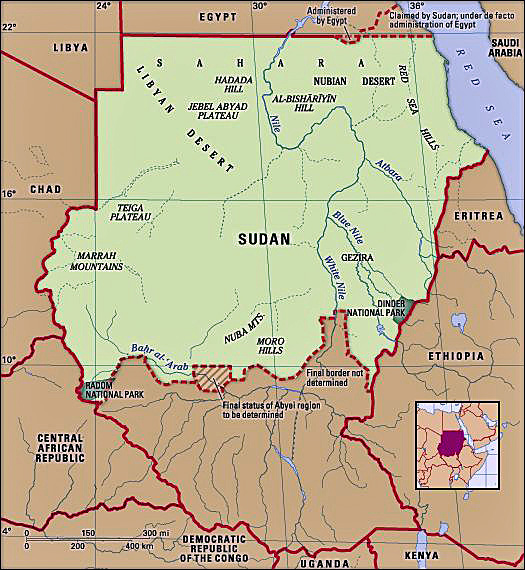 Government forces carried out raids in camps for internally displaced people, resulting in four deaths of residents at Kalma camp. The raids were ostensibly to search for weapons, alcohol, and other contraband as part of the governor’s emergency response to rising criminality.

Starting in October 31, large numbers of Sudanese forces entered the North Darfur town of Tabit, beating men and raping women and girls over a two-day period. Sudan initially refused to allow the African Union (AU)/United Nations Hybrid Operations in Dafur (UNAMID) to access the town. When the peacekeepers did gain access, Sudanese security forces were present during their visit, undermining the credibility of their investigation

In its sixth year, UNAMID has been largely ineffective in protecting civilians from violence and has all but ceased public reporting on human rights issues. Sudanese government restrictions have seriously hampered access to conflict areas, including the rebel stronghold, Jebel Mara. Chronic security threats have also undermined its effectiveness: attacks on the peacekeepers have killed at least 207 since 2008.

Conflict and Abuses in Southern Kordofan and Blue Nile: In April 2014, the government intensified ground and aerial attacks in rebel-held areas of the Nuba Mountains, Southern Kordofan, deploying the Rapid Support Forces and other security forces to several areas. In May and June, government bombing damaged schools, mosques, churches, water sources and health centers, including a Médecins sans Frontières clinic. Dozens of civilians were killed or injured.

The attacks, which continued throughout the year, forced tens of thousands of people, some already displaced, to abandon their homes and fields. In government-controlled areas, government forces detained dozens of displaced civilians for their perceived political views.

Ground attacks and government bombing also persisted in Blue Nile, though many people have fled to refugee camps in South Sudan. In September, government forces attacked villages, carrying out numerous cases of sexual violence in Bau locality. In August, the conflict in South Sudan spilled into the refugee camps when a local militia group, following clashes between government soldiers and ethnic Nuer opposition forces, targeted ethnic Nuer aid workers, killing five in the area of Bunj town. More than 220,000 refugees from Southern Kordofan and Blue Nile remain in camps in Unity and Upper Nile states in South Sudan.

Freedom of Peaceful Assembly, Association, Expression: Sudanese law enforcement officers continued to violently disperse protests and to arbitrarily arrest and detain protesters and activists. In September 2013, government forces used excessive force, including live ammunition, to disperse a wave of protests over austerity measures. The forces were implicated in over 170 deaths, and hundreds of injuries and arrests. Many people were held for weeks or months without charge or access to family or lawyers, and were beaten, verbally abused, deprived of sleep, and held for long periods in solitary confinement.

The government has failed to investigate or prosecute those responsible for the 2013 killings and related abuses. In September 2014, the UN’s independent expert on sudan reported to the Human Rights Council (HRC) that the government had not conducted thorough and independent investigations. Of scores of complaints lodged, only one proceeded to trial, unsuccessfully.

In September, government forces broke up memorial services for the one-year anniversary of the killing of protesters, and arrested more than 80 political opposition members, activists, and their family members.

In June, authorities shut down the Salmmah Women’s Resource Center, a women’s rights organization in Khartoum. The closure was the latest of several in recent years, provoking renewed fears the government would clamp down further on civil society and specifically women’s rights activists. In August, security forces carried out searches of another civil society organization in Khartoum, but did not shut it down.

Arbitrary Detentions, Ill-treatment, and Torture: Sudan’s National Intelligence and Security Service (NISS) and other security forces arrested opposition party members and activists throughout the year, despite promises by President Omar al-Bashir to release all “political detainees.”

On May 12, NISS officials arrested Mohammed Salah, 25, Taj Elsir Jaafar, 26, and Moammer Musa Mohammed, 27, near the University of Khartoum. Authorities detained them without charge at a NISS facility in the suburb of Bahri. The activists, who participated in campaigns protesting the killing of a Darfuri student, Ali Abaker Musa Idris, by government security forces at Khartoum University on March 11, were subjected to ill-treatment and possibly torture; they were released in July.

Sadiq al-Mahdi, head of the National Umma Party, was arrested on May 17 after publicly criticizing the Rapid Support Forces’ abuses in Darfur. He was released after a month in detention. Ibrahim al-Sheikh, head of the Sudan Congress Party, was arrested in al-Nuhood, North Kordofan, and detained from June 8 until mid-September without access to family or lawyers, or needed medical care, along with several other party members. Sudanese military courts exercised their new power to try civilians, contrary to international standards. The courts acquitted one journalist but convicted at least eight Darfuri civilians whom they accused of being members of opposition forces. In July 2013, Sudan’s parliament amended the Sudan Armed Forces Act of 2007 to allow military courts to exercise jurisdiction over civilians for a range of broadly defined offences such as undermining the constitution and publication of “false news.”

Law Reform: The National Security Act of 2010, which gives security forces broad powers of arrest and detention, and many other laws contravene basic human rights norms. The government has also failed to implement various criminal justice reforms, including law reforms recommended by the AU’s mediation body, the High-Level Panel on Darfur, in 2009.

Authorities continued to apply Shari’a law sanctions that violate international prohibitions on cruel, inhuman or degrading punishment. The penalties are applied disproportionately to women and girls, typically for “crimes” that include private beliefs and decisions about marriage, sexuality, or dress code.

In May, a judge in Khartoum sentenced a pregnant 27 year old, Mariam Yahya Ibrahim, to death for the crime of “apostasy,” and to 100 lashings for “adultery.” Ibrahim, detained for months, was initially accused of adultery because she is married to a non-Muslim of South Sudanese origin—a marriage the court did not recognize. The court added the apostasy charge after Mariam said she is Christian. Following intense international pressure, Ibrahim was released in June.

Key International Actors: Relations with South Sudan deteriorated with the outbreak of war there in December 2013 and renewed accusations of Sudan’s support to armed opposition in South Sudan. The two governments made no progress on other outstanding issues, such as border demarcation, security, and status of the contested area of Abyei, as required in the 2012 cooperation agreement.

In August, the UN Security Council extended UNAMID’s mandate for 10 months, at which time it is expected to alter the mandate. The Security Council also extended the UN Interim Security Force for Abyei to February 2015, and in September, the HRC extended the mandate of the independent expert for one year. The HRC resolution condemned violations of international humanitarian law in Darfur, South Kordofan, and Blue Nile; criticized Sudan for the shooting of protesters; and called for an independent public inquiry into the killing of protesters and release of political prisoners. However, the HRC postponed the appointment of a new independent expert for several months.

The International Criminal Court (ICC) has charges pending against five individuals, including Sudan’s President Omar al-Bashir, for war crimes, crimes against humanity, and genocide in connection with atrocities in Darfur. Khartoum refuses to cooperate with the ICC and has obstructed its work. In September, the ICC issued an arrest warrant and vacated the November trial start for Abdallah Banda, a Darfur rebel commander accused of attacking a UN base in 2007.