NAIROBI (Thomson Reuters Foundation) – Men in war-torn Somalia suffer high rates of drug addiction, divorce and mental illness, researchers said, urging donors to do more to support men and strengthen families. In Somali culture, men are expected to provide all household needs, from food to security. But many women have become breadwinners since the 1991 ouster of dictator Siad Barre, creating an identity crisis for men.

Many Somali men are addicted to an amphetamine-like drug called khat, traumatized, depressed and physically disabled, the study found. “Men find themselves dispensable, with no meaningful role and no stake in the future,” said the World Bank-funded study, based on interviews with 400 men and 90 women living in Somalia and neighboring Kenya. 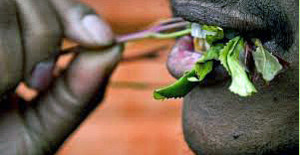 “Men of all ages and backgrounds commonly recalled periods when they experienced some form of mental breakdown.” Khat, a leaf that is chewed for several hours, has become a “social epidemic”, said Said Mohamed, one of the researchers. “It’s a way to escape from reality,” he said. “Men feel useless.”

After the collapse of Barre’s government, which was the country’s major employer, many Somali men lost their jobs, causing a “personal catastrophe for many men, from which many have not recovered”, the report said. Those living as refugees in Kenya are legally barred from working or leaving the camps, and depend on aid agency rations given to their wives.

“He lost respect in the house,” a mother of seven said about her husband in the report. “Even his children do not listen to him.” Young men are under increasing pressure to provide for their families, often through illegal means such as piracy or through the barrel of a gun, the researchers from the Rift Valley Institute Nairobi Forum said.

“The picture that emerges is really a very depressing one,” said Judith Gardner, one of the report’s authors. The men “join al Shabaab or another militia group that would pay (them) a salary … or (they) try to escape to Kenya,” she said. Rates of divorce were reported to be “very high”, with some men in their 20s having been married more than three times.

Verbal abuse of men by women has also increased, the study said. “When I come home in the evening I will find her with some meager income she has earned that makes her think she has taken over responsibility for the family,” one man told the researchers. “She will start yelling at me, ‘He is sitting there idly!'”

Men have started seeking wives to support them financially, the study found. Most common are “diaspora marriages” with Somali women overseas, or “gigolo” arrangements in which “a young, healthy man marries an older woman to live as her sexual companion, assistant and financial dependent”.

The researchers called on donors to pay greater attention to men’s needs. “There are lot of men who have suffered enormously and are not getting any support,” said Judy El-Bushra, one of the report’s authors.