Kampala – President Museveni yesterday said he “will go” but also challenged whoever is asking him to leave power to show the nation the wealth they have created for themselves using government infrastructure.

Speaking during a visit to the Business Process Outsourcing Centre at Statistics House yesterday, Mr Museveni said the problem with Ugandans is that even those who cannot afford food in their homes are too talkative and cannot differentiate between wealth and development. 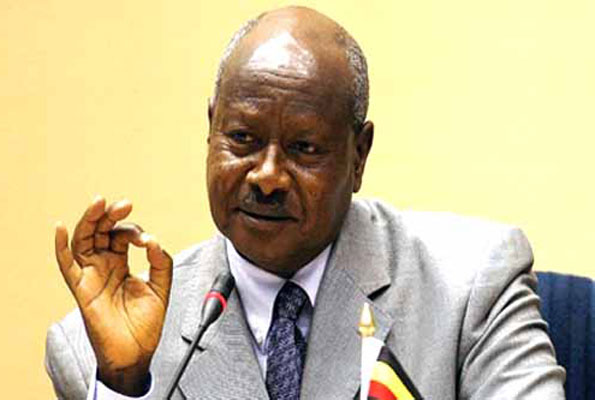 It was not immediately clear if Mr Museveni’s remarks were a reaction to recent political developments, which have seen his former prime minister, Mr Amama Mbabazi, announce his 2016 presidential bid, telling the President that time is up for his government and asking him to hand over power peacefully.

In 2001 when Dr Kizza Besigye ran against Mr Museveni, the campaign slogan ‘Agende’—(Luganda for let him go) was coined in Buganda region which was a reference to Mr Museveni’s long stay in power.

Subsequently, sections of the public have since then been calling into radio and television talk shows urging the President to leave power because of the poor state of social services across the country. This was the first time the President, who has previously publicly confessed to not being computer-friendly, was visiting the centre.

“In 1986, we had only 28,000 telephone lines to be exact but today we have 20 million handsets. Owning a mobile phone is not a sign of development but an instrument to facilitate you to create wealth,” he said, adding that Ugandans should stop using mobile phones for gossiping but for productive purposes.

The centre is supposed to support creation of local enterprises, which use internet-enabled services, establishing customer call-in and information desks thereby creating jobs locally and.

Mr Francis Tusubira, the board chairman of National Information Technology Authority, showed an example of a business process outsourcing enterprise, comparing it to the call centre contracted by the Ministry of Agriculture with a dedicated toll free number through which farmers get information regarding weather information.