NEARLY 60m people were forcibly displaced across the world by conflicts in 2014 (either within their own countries, or to other nations as refugees). It is the highest number ever recorded according to a new report by the UN High Commissioner for Refugees (UNHCR), and equivalent to the population of Italy. The figure is 8.3m higher than in 2013, driven mainly by the war in Syria, the advance of IS in Iraq and resurgent conflicts in Africa. 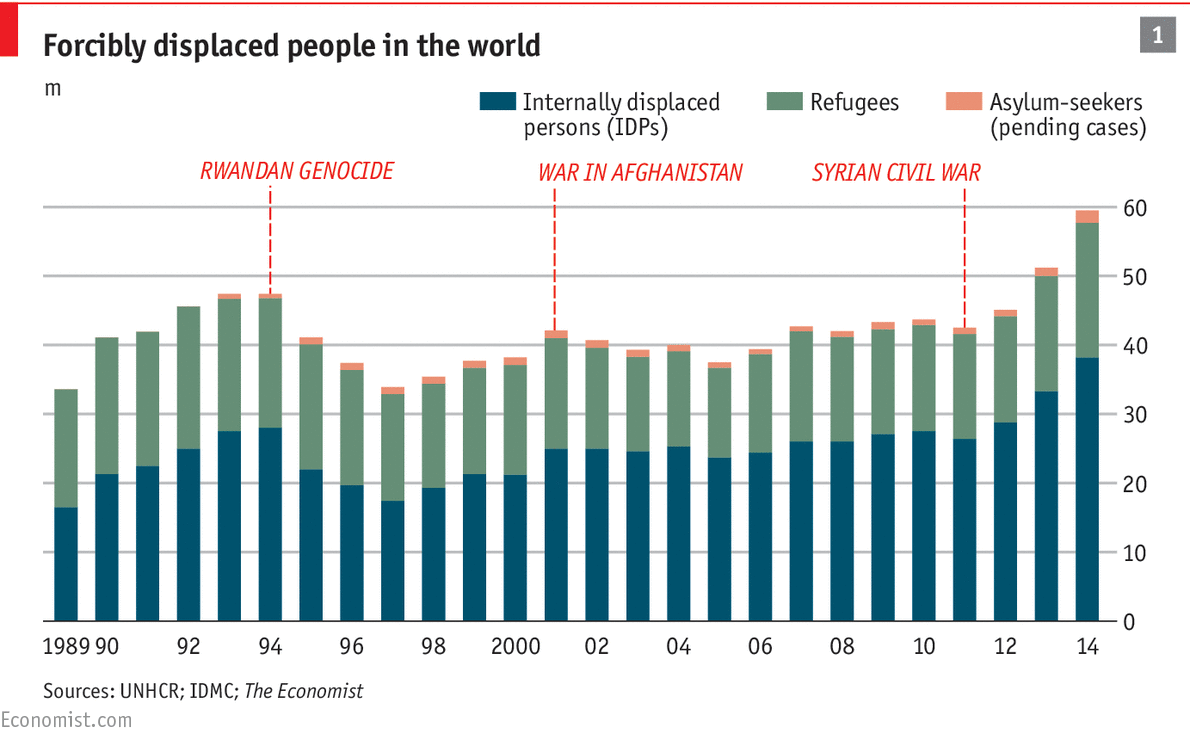 The number of refugees grew from 11.6m to 14.4m (excluding 5.1m Palestinians) over the same period globally, the biggest annual increase seen since 1990. Syria is now the main source country of refugees, overtaking Afghanistan, which had held that unenviable position for more than 30 years. By the end of the year, 3.9m Syrian refugees had fled (a sixth of its population), and another 100,000 have left so far this year. Of the ten largest source countries in 2014, six are African. Continuing conflicts in Somalia, South Sudan, Congo and the Central African Republic are taking a heavy toll. Eritreans are fleeing their repressive country in droves, often via neighbouring Ethiopia. Despite a population of only 6m, Eritrea is the second-biggest source country of illegal crossings by sea to the European Union after Syria. And the rise in the number of conflicts worldwide has made it harder for people to go home. Over 6m refugees have been in exile for five years or more and only 126,800 returned to their home countries last year, the lowest number in 31 years. 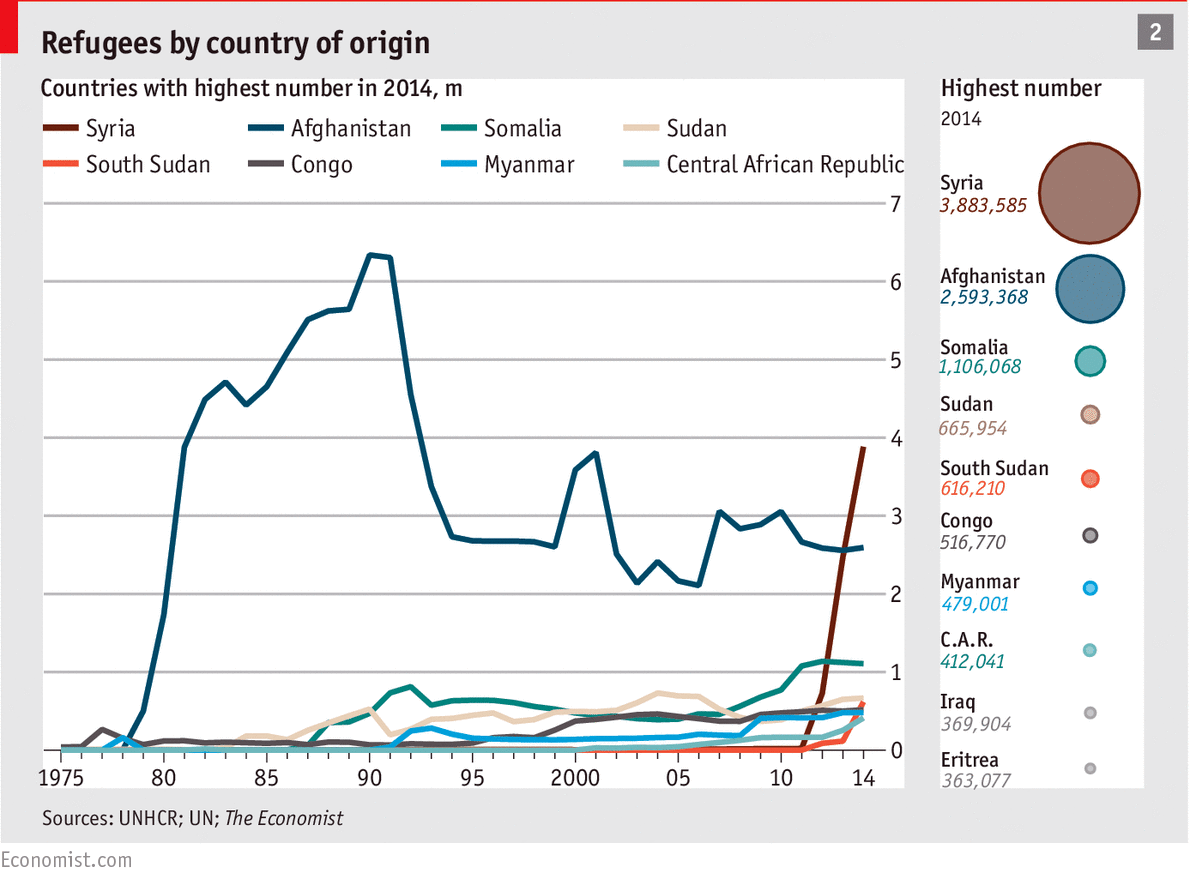 The impact of Syria’s war is being felt everywhere, especially in the neighbouring region. Syrians have poured into Turkey—which has become the main destination country for refugees, superceding Pakistan—with 1.6m refugees in 2014. And people are still arriving: by June this year this had risen to 1.78m. Neighbouring Lebanon and Jordan also host huge numbers of Syrians: as a share of its own population Lebanon bears the biggest burden in the world, with 232 refugees per 1,000 inhabitants. Jordan is next at 87 and Nauru, where many migrants to Australia are held, is third-highest with 39. The economic burden falls disproportionately on poorer countries. Around 85% of all refugees are living in developing countries compared with 70% twenty years ago. 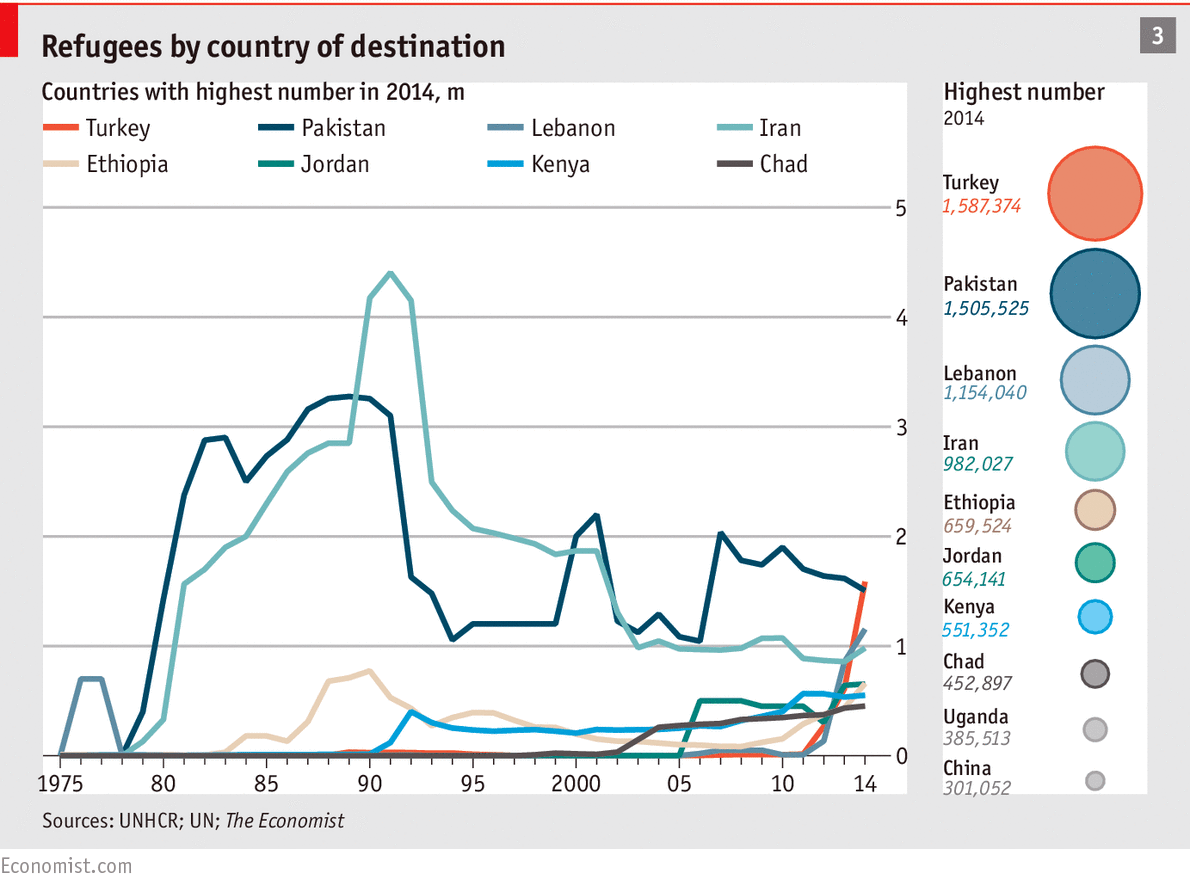 The number of people displaced within their country’s borders grew by almost 5m in 2014 to 38.2m. Syria has the largest number of IDPs, with 7.6m, 20% of the global total. In Colombia, the 50-year-old civil war continues to exact a heavy price. Some 136,000 people were displaced in 2014, swelling the total to 6m, the second-largest number anywhere. Another 360,300 Colombian refugees left the country in the same year. Meanwhile, the advance of IS in Iraq drove 2.6m Iraqis from their homes. 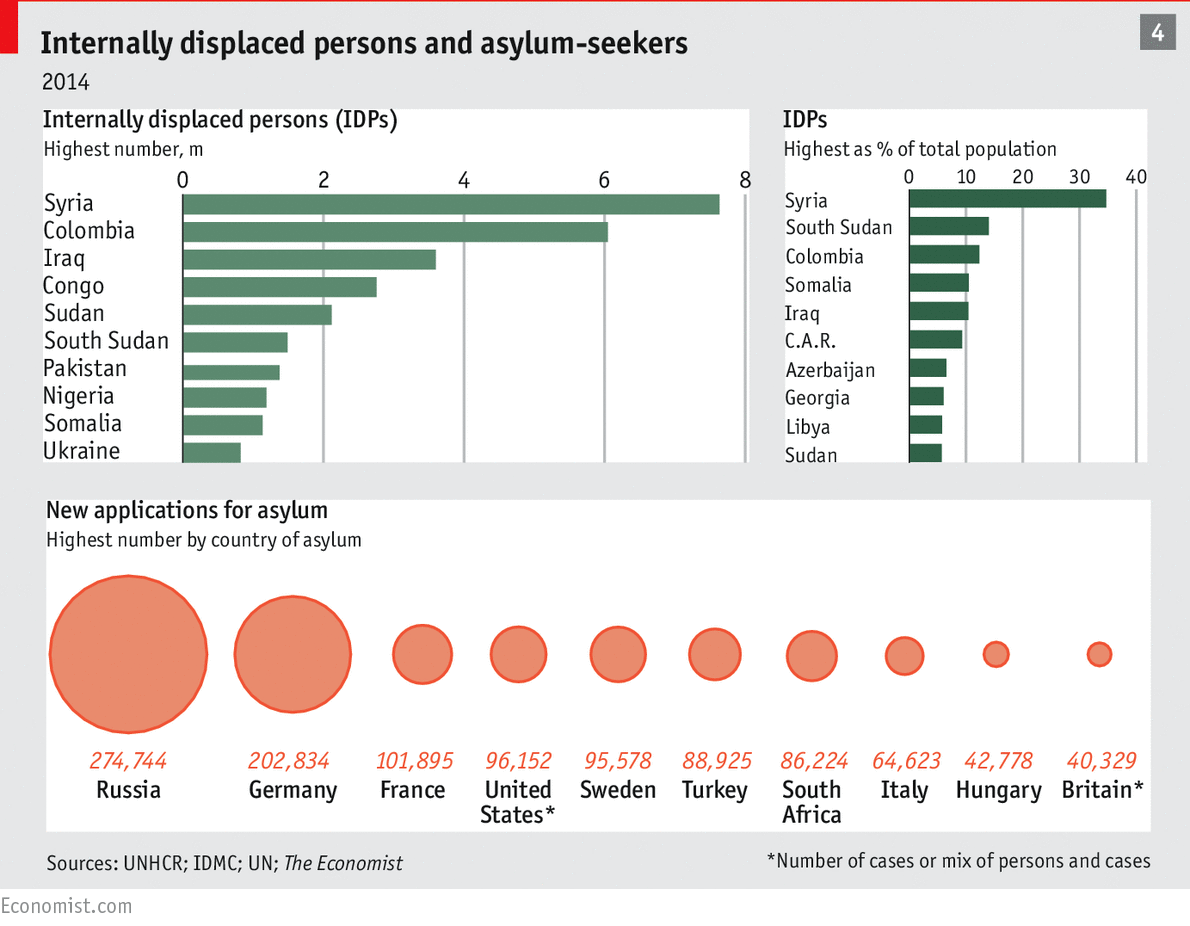 Some 1.47m new asylum applications were made globally in 2014, 50% more than the previous year. Of those, 171,200 were by Syrians. But the largest number by far were by Ukrainians: 288,600 people applied for asylum, 271,200 of whom did so in Russia. Germany received 173,100 new applications and is relatively welcoming, accepting a large proportion of asylum-seekers. Other EU countries are less welcoming. On June 17th Hungary announced plans to build a fence along its 175-km border with Serbia to deter migrants, mainly from Kosovo. The spike in global applications has exacerbated the backlog: nearly 1.8m applicants were still awaiting a decision compared with 1.2m in 2013. All in all, a grim picture.