THE world’s oldest tools are the size of massive fists, sharpened at the edges and seemingly unblemished, having been preserved in ancient soil. They predate the earliest humans and hint at how long it has taken our species to evolve. When the find near Lake Turkana in north-western Kenya was publicised earlier this year, it pushed back the known start of primitive tool use and hence human ancestral development by 800,000 years.

Today the stone tools lie in a wooden box in a room with open windows at a local research station, the Turkana Basin Institute, perched on a hill above a spindly river. The resident scientists reckon the tools need no special climate protection since they have already been exposed to the elements for 3.3m years.

The region around Lake Turkana, the world’s largest desert lake, is known as the cradle of mankind. Over the past century many remains of man’s ancestors have been found well preserved in windswept scrubland far from paved roads and modern interference. Life in Turkana remained unchanged for as long as anyone could remember. Even today residents in remote parts live off the land and only a tiny fraction are literate. But in the past few years things have begun to change dramatically. 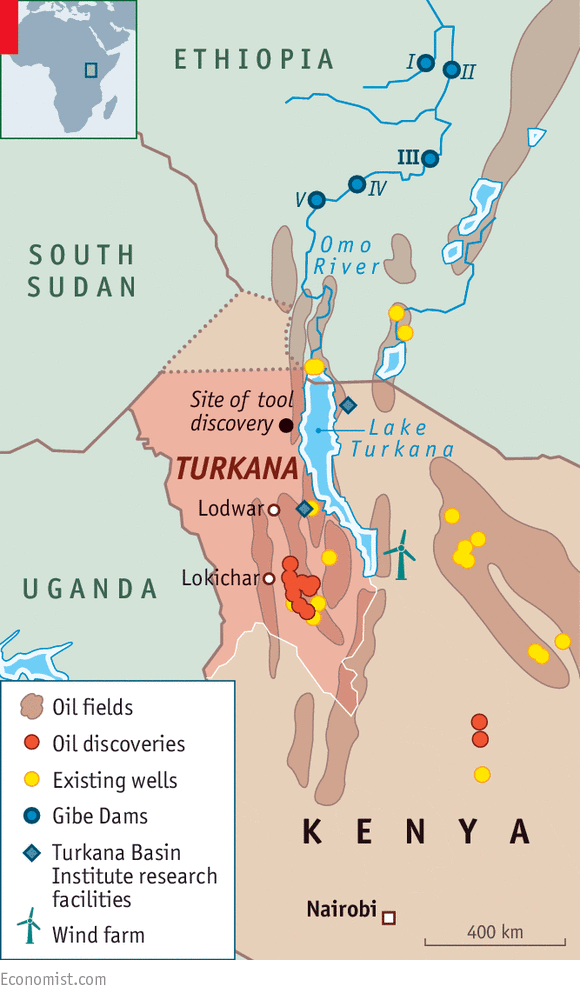 A turning point came with the discovery of oil in 2012. Kenya joined the increasingly non-exclusive club of countries exploring for hydrocarbons (90% of African nations now do). Turkana saw an influx of rigs, roads and burly foreigners with big wallets. Tullow and Africa Oil, based in London and Vancouver respectively, found evidence of enough crude oil to make production commercially viable. At the government’s insistence, they hired thousands of locals as labourers, filling empty pockets in Kenya’s poorest region and erecting Turkana’s tallest building, a two-storey house.

Some towns grew by 500% in two years. Itinerant families started building permanent homes. Elijah Kodoh, a local official, says “people are moving very quickly to a sedentary life.” Shops have opened where none had ever been. The town of Lokichar got its first mall, the South Gate Business Centre. At lunchtime in the newly opened Yassin Hotel nearby—built with wages from Tullow—a live goat is led through the dining room to be slaughtered in the backyard.

From the beginning, however, relations were fraught. The two nomadic communities, oil engineers and bush pastoralists, distrusted each other. Locals had inflated expectations and suspected they were being cheated. They complained of environmental damage and that outsiders were getting the best jobs. The companies said it was hard to find skilled local people for drilling and seismic work.

In 2013 violent protests erupted; roads were blocked and angry crowds stormed rigs and looted them. Work was suspended for a while. Then the oil price crashed in 2014 and the companies cut their budgets drastically. Jobs were lost—upsetting locals who had not understood the lay-off clauses in their contracts. The economy around Lokichar slumped. Yet rather than inflaming tensions it seems to have eased them. Mutual dependency became an accepted fact. “We are not going to drive away investors,” says Peter Ekai Lokoel, Turkana’s deputy governor and a former activist. “We need them.”

Hopes of a return to the good times rest not just on a rise in the oil price—experts say the fields are profitable at about $70 per barrel—but also on government plans to build a pipeline to Kenya’s coast. Politicians are still arguing about its route, but in the meantime Tullow has built a vast base outside Lokichar, erecting Chinese-made, air-conditioned housing containers for hundreds of workers over an area the size of six football fields in anticipation of a bonanza around the corner.

If and when it happens, Turkana will get its first paved roads, power stations and water treatment plants. Yet the knock-on effects of the oil boom are already evident and reach well beyond infrastructure. Drillers have found not just oil but reportedly also several large underground aquifers that could supply the bone-dry region with water for decades. Pastoralists might in future be able to grow crops. A man with a jerry-rigged distillery in a thatched hut near Tullow’s camp says: “We thought oil would bring us jobs and it’s done that—at least for some. But it’s so much more, both good and bad.”

Inter-communal violence in what has always been a lawless area has spiked in recent years. Armed gangs are trying to gain control of potentially oil-bearing land. They raid villages, steal cattle and make certain routes impassable. A trader at a livestock market for camels says: “Buyers and sellers are robbed.” In one attack bandits killed 46 policemen. Their colleagues retaliated with artillery. As oil firms drill more wells, the violence could get worse. Mr Lokoel, the deputy governor, says that “lots of people are suddenly claiming land as their own.”

Oil is not the only engine of change. Africa’s biggest wind farm is being built east of Lake Turkana at a cost of $1 billion and will bring cheap and plentiful electricity. Even more power will soon flow across the Ethiopian border to the north, where the government is building Africa’s biggest hydroelectric dam. The Gibe III project, completed on July 1st, is expected to lower the water level in Lake Turkana by 30 feet (with potentially catastrophic consequences) and to displace tens of thousands of Ethiopian villagers, many of whom will flee to the lake’s shores.

Migrants are already arriving from all directions. Tens of thousands of South Sudanese are fleeing a renewed civil war just to Turkana’s north-west, driving up food prices as aid agencies rush in to feed them. Meanwhile plenty of ethnic Turkanas, especially those with an education, are returning to their homeland from elsewhere in Kenya, hoping to join the oil boom, often as officials, wearing extraordinarily large wrist watches.

Until recently, almost nobody in the region had had much contact with any form of government. Locals talk of “going to Kenya” when they travel south. While Nairobi, the national capital, has had public services for more than half a century, the country’s north-west remained neglected by the state. That, too, is changing rapidly.

A new Kenyan constitution set up local-government structures in 2010. For the first time Turkana elected its own governor in an election two years ago. He is receiving national funds to expand education and health care. Because it is poor, Turkana gets the second-highest allocation of cash among the 47 newly created counties. A local official calls devolution a “godsend”.

But all these changes—oil, roads, electricity and devolution—may not be enough to make Turkana prosperous. The drought is getting worse. And petrodollars can fuel corruption and conflict in countries where institutions are not strong enough to handle the windfall wisely—witness the terrible civil war in neighbouring South Sudan. Kenya is better-run than South Sudan, but it is not exactly Norway, either. Some worry that its newfound oil wealth will prove a curse.

Other observers are more optimistic. Kenya’s technology boom has reached even the most remote areas, putting smartphones into goatherds’ hands. The central government, supported by DFID, the British government’s development arm, has set up a high-tech cash-transfer scheme for the poorest 10%. With the help of a Kenyan bank, Equity, it has issued debit cards in villages across the county which are used to give away the equivalent of about $50 every other month to tens of thousands of households in Turkana. Itinerant traders have received card readers from Equity. They now pay out the cash and are reimbursed by a government agency, thus bringing banking services to some of the world’s most remote people.

Many recipients have used the cash to start small trading businesses. Ngispaan Topos and his wife buy large canisters of cooking oil with the transfers and sell it by the cup to neighbours at a 30% markup in their village south of Lodwar. They and their six children live in three thatched huts with sandy floors. In one they keep their MasterCard.

Turkana is in some ways typical of Africa. Cherished ways of life are disappearing faster than at any time in the past 3.3m years. The path to development will be bumpy, and elites will eat a disproportionate share of the rewards. Yet it is hard to find anyone in the county who would rather have been born in an earlier age.