Why is Greece chastised for reckless borrowing while the financial institutions that profited for years seem to get off scot-free?

One of the first lessons I was taught on Wall Street was, “Know who the fool is.” That was the gist of it. The more detailed description, yelled at me repeatedly was, “Know who the fucking idiot with the money is and cram as much toxic shit down their throat as they can take. But be nice to them first.”

When I joined in Salomon Brothers in ‘93, Japanese customers (mostly smaller banks and large industrial companies) were considered the fool. My first five years were spent constructing complex financial products, ones with huge profit margins for us—“toxic waste” in Wall Street lingo—to sell to them. By the turn of the century many of those customers had collapsed, partly from the toxic waste we sold them, partly from all the other crazy things they were buying.

The launch of the common European currency, the euro, ushered in a period of European financial confidence, and we on Wall Street started to take advantage of another willing fool: European banks. More precisely northern European banks. 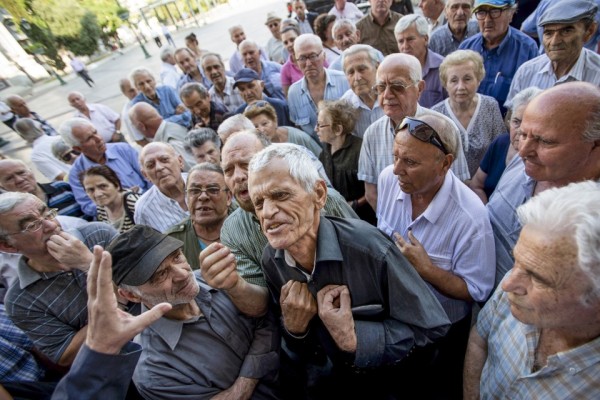 From ‘02 until the financial crisis in ‘08, Wall Street shoved as much toxic waste down those banks’ throats as they could handle. It wasn’t hard. Like the Japanese customers before them, the European banks were hell bent on indiscriminately buying assets from all over the globe.

They were so willing, and had such an appetite, that Wall Street helped hedge funds construct specially engineered products to sell to them, made of the most broken and risky subprime mortgages. These products—the banks called them “monstrosities” and later the media dubbed them as “rigged to fail”—only would have been created if they had reckless buyers, and the European banks were often those buyers.

The European banks weren’t lending recklessly to only the U.S. They were also aggressively lending within Europe, including to the governments of Spain, Portugal, and Greece.

In 2008, when the U.S. housing market collapsed, the European banks lost big. They mostly absorbed those losses and focused their attention on Europe, where they kept lending to governments—meaning buying those countries’ debt—even though that was looking like an increasingly foolish thing to do: Many of the southern countries were starting to show worrying signs.

The 2010 bailout was a bailout of the banks in everything but name.

By 2010 one of those countries—Greece—could no longer pay its bills. Over the prior decade Greece had built up massive debt, a result of too many people buying too many things, too few Greeks paying too few taxes, and too many promises made by too many corrupt politicians, all wrapped in questionable accounting. Yet despite clear problems, bankers had been eagerly lending to Greece all along.

That 2010 Greek crisis was temporarily muzzled by an international bailout, which imposed on Greece severe spending constraints. This bailout gave Greece no debt relief, instead lending them more money to help pay off their old loans, allowing the banks to walk away with few losses. It was a bailout of the banks in everything but name.

Greece has struggled immensely since then, with an economic collapse of historic proportion, the human costs of which can only be roughly understood. Greece needed another bailout in 2012, and yet again this week.

While the Greeks have suffered, the northern banks have yet to account financially, legally, or ethically, for their reckless decisions. Further, by bailing out the banks in 2010, rather than Greece, the politicians transferred any future losses from Greece to the European public. It was a bait-and-switch rife with a nationalist sentiment that has corrupted the dialogue since: Don’t look at our reckless banks; look at their reckless borrowing.

The European Union started with an economic agreement on coal and steel and good intentions. It was, at least in part, an attempt to diminish through shared economic incentives the nationalism that had led to past wars.

The economic unification became a currency union in 1999 with the creation of the euro zone. The common currency was adopted despite a lack of political union, a sequence which many at the time described as putting the cart before the horses.

Along with the common currency came a wave of regulatory changes that provided the banking sector with more opportunities for growth—and the chance to become the fool. The rule changes enabled the banks to treat the debt of all euro zone countries equally; Greece, as far as the rules were concerned, had the same risk as Germany.

The markets had thought differently, with Greece having to pay more to borrow than countries such as Germany. The northern banks, seeing easy money, started lending to Greece, happily receiving higher fees for the “same risk.”

It was the beginning of a self-fulfilling feedback loop with the banks at the center. Southern Europe (especially Greece), started borrowing more, allowing them to buy more, which caused them to grow, which collapsed the cost of their borrowing, with led them to borrow more, and so on.

The buying spree benefited everyone, especially the northern European countries. The South boomed as things got built and bought, and the North boomed as factories churned out products to sell to the South. The banks sat in the middle, happily taking a spread.

This feedback loop was uniquely European, dependent on the false sense of stability provided by a common currency, which amplified the bankers’ naive belief that a country could not default.

This loop kept going until the sheer weight of the debt amassed by Greece became too huge for the markets to ignore. It kept going until the markets, shocked by the U.S. housing crisis, prompted skepticism, which forced Greek borrowing fees to rise. The European banks, in too deep to stop, were still willing to lend, but others less so.

By 2010 this could go on no more. The markets refused to lend more to Greece and a bailout was necessary.

A narrative emerged of southern borrowers as the victims of only their own incompetence, sloth, and greed.

But the bailout was primarily focused on saving the banks, not Greece: Rather than forgive a  portion of the  Greek debt and hand the banks a loss, Greece was to continue paying its bills. New money was lent by a variety of public sector entities (i.e.The European Commission, the IMF, and the European Central Bank) to pay off the old bills. The banks were consequently made whole, with most of the money from the new loans passing through Greece right back to the banks. For acting as a conduit to a northern European bank bailout, Greece was asked to change its ways—to spend less, tax more, and restructure the public sector.

This did not work. Greece was plunged into an even more dire depression. Two years later it was once again unable to pay its bill and required a new bailout. This time Greece’s debt was cut, roughly by 40 percent, but by then the banks had far less to lose, with many of the loans having already matured and been fully paid.

That first furtive bailout of the banks in 2010 introduced and encouraged a narrative of southern borrowers as the victims of only their own incompetence, sloth, and greed. It allowed the banks to play the role of upset parents to immature children.

That narrative was further encouraged and politicized by passing any future losses from Greece onto the European public, mostly the northern European public, encouraging an us-versus-them mentality. It was policy dressed in nationalism: the antithesis of everything the common currency was supposed to stand for.

One argument was that Europe was still not closely aligned enough, their regulators not coordinated enough, to pull off such an operation. The louder argument was that the European banks were too vulnerable, fragile, and essential, to suffer losses. Those losses would of propagated around Europe, collapsing other banks and other countries and, ultimately, breaking up the euro zone.

That argument continued: The banks were too central to the operation and health of the economy, no matter how recklessly they had behaved, to punish with losses. It is an argument one hears during a crisis in order to justify bank bailouts, to justify favoring the creditors over the lenders. It is a strong argument—because it is true.

Consequently it is also the strongest and best argument for why banks should be heavily regulated and controlled in the first place: to prevent exactly that sort of behavior—before it destroys countries and economies.

Politicians, regulators, and bankers can calculate the immediate costs of bank failures. They can’t calculate the longer-term human toll that follows.

Greece is experiencing immense pain from a depression greater than that of the U.S. in the ‘30s. Poverty, homelessness, suicide, addiction—all have risen. A generation has seen the present diminished, and the future diminished even more.