The president may have just compromised his global human rights agenda.

Lawmakers from President Barack Obama’s own party had previously pilloried the administration’s official Trafficking In Persons report, which is used to shame governments that support or tolerate modern-day slavery. Experts say the report has successfully been used in the past to improve worker protections abroad. But in July, the administration upgraded several nations — including Malaysia, Cuba and Saudi Arabia — that independent human rights experts said had done little to improve their human trafficking status. 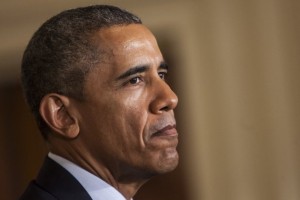 Lawmakers and human rights activists said that several of these favorable rulings appear to be connected to unrelated political projects. An upgrade for Malaysia, for instance, effectively makes the country eligible for participation in the Trans-Pacific Partnership, a controversial trade pact the Obama administration is negotiating with 11 other Pacific Rim countries.

Human rights experts said they were appalled by the July report, and reiterated their discontent on Monday. “The vultures circled,” said Phil Robertson, deputy director of the Asia Division for Human Rights Watch. “What you are seeing is significant damage to the credibility of that report because of these political games played back in Washington.”

The State Department division responsible for monitoring human trafficking abuses has not had a Senate-approved leader since the fall of 2014. “There’s almost an orientation of diplomats to cover the ass of countries that they’re posted in,” Robertson said. “And it reflects poorly on State Department leadership that they allowed this to go forward.”

The Obama administration recently reopened diplomatic ties with Cuba, while Saudi Arabia has been upset with the recent diplomatic agreement designed to prevent Iran from developing nuclear weapons.

Sens. Robert Menendez (D-N.J.) and Rob Portman (R-Ohio) criticized Malaysia’s upgrade, as did Reps. Sander Levin (D-Mich.), Rosa DeLauro (D-Conn.), Lloyd Doggett (D-Texas) and others. Labor advocates said the upgrade undermines Obama’s repeated vow that the TPP deal would include robust, enforceable labor standards. Malaysia had been previously labeled a “Tier 3” country — the worst possible category on the list. The country is home to a robust sex slavery industry, and its electronics sector includes widespread forced labor. In April, the bodies of more than 130 human trafficking victims were found in mass graves near the country’s northern border with Thailand.

On Monday, Reuters reported that political staff at the State Department had successfully pressed for higher human trafficking rankings for Malaysia, Cuba and other countries, over the objections of human rights staffers. While diplomats and political appointees are always involved in the TIP report process, this year, human rights experts found themselves facing unusually stiff opposition from higher-ups. According to Reuters, analysts at the State Department’s Office to Monitor and Combat Trafficking in Persons objected to 17 country ratings assigned by top staffers, but only prevailed on three of those cases — the lowest such percentage since the U.S. government began issuing the report in 2001.

In a statement provided to HuffPost, the State Department denied that the report had been politicized.

Human rights advocates say that allowing political considerations to skew the human trafficking report could render the report less effective in the future.

Diplomats also successfully kept human rights officials from downgrading China in this year’s report. However, human rights experts did prevent higher-ups from boosting the ranking of Thailand, a nation notorious for slavery in its seafood industry.