Israel is building a new fence along its border with Jordan amid widespread soul searching over whether it should allow Middle Eastern refugees to come in.

TEL AVIV — Even as scenes of Middle Eastern refugees streaming along European railways were stirring Israelis’ collective memory of World War II, Prime Minister Benjamin Netanyahu traveled this week to Israel’s frontier with Jordan to inaugurate construction of a fence aimed at keeping potential migrants out.

The desert frontier marks the third border to be blocked by Israel since 2011 to stop illegal crossings, but it comes amid widespread soul-searching in this relatively prosperous nation about whether Israel should follow the lead of European countries and agree to allow Arab refugees to come in.

Opposition leader Isaac Herzog triggered debate when he declared last weekend that “our people experienced with their own flesh the silence of the world and can’t remain indifferent to the murder and massacres in Syria.” But Mr. Netanyahu responded that Israel is simply too small to take in refugees, and pointed to a recently completed fence with Egypt as crucial to Israel’s economic and physical security.

Mr. Herzog later accused the prime minister of “forgetting what it is to be Jewish: refugees, persecuted.” Netanyahu’s allies countered that precisely because of that history, Israel must ensure that its Jewish majority isn’t diluted by a wave of non-Jewish migrants. The exchange dredges up the emotional baggage associated with centuries of Jewish persecution, and how Israel was established by survivors of the Holocaust. Yet how Israel should apply the lessons from that trauma differs according to political leanings. 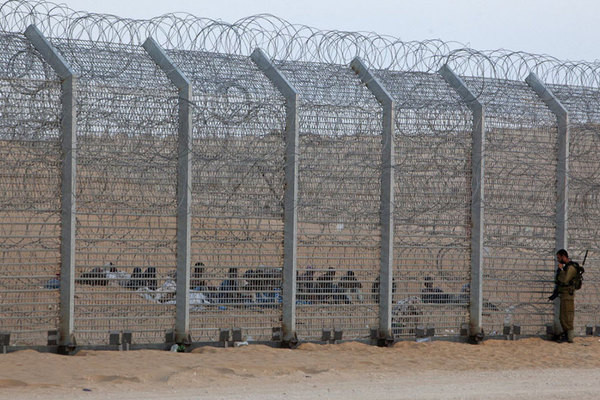 The current debate isn’t happening in a vacuum: For six years, Netanyahu and his liberal opponents have been divided over what to do about tens of thousands of Eritrean and Sudanese migrants who crossed the Egyptian border illegally in search of political asylum (a status Israel has extended to very few Africans). Echoing sentiment that Israeli blue collar neighborhoods could be flooded with African migrants, Netanyahu’s allies have suggested this time that Herzog host any Syrian refugees.

“The question of how we feel about the asylum seekers goes to the heart of how do we feel about being a Jewish state; both sides invoke it,’’ says Yossi Klein Halevi, a fellow at the Shalom Hartman Institute. “On one hand, there are those that stress the need for preserving the Jewish state. That’s a fair argument, if talking about hundreds of thousands of migrants. Proponents of a more generous approach argue that the Jewish state has a special responsibility.”

Analysts say the real reason Israel won’t allow in Syrians has nothing to do with demography or space: rather, Israeli security authorities are loathe to resettle large number of nationals from an enemy country. Instead of focusing on Syrian migrants, some say Israel should figure out how to provide better social conditions for the Africans, who have been pressured to leave through third-country repatriation and the establishment of detention centers in the desert.

“We need to start taking care of these people. We need to take responsibility for those who made it through the border before there was a fence,” Mr. Halevi says.

For many Israelis inundated with images of refugees each year during the Holocaust memorial observance, video footage of Syrian refugees crowded behind the fences of detention centers or walking along train tracks is deeply affecting. And images of overcrowded ships plying the Mediterranean recall illegal Jewish immigration to British Mandatory Palestine.

“For the average Israeli, all of this is a huge flashback to stories and family photos that they haven’t seen for years,’’ says Tal Schneider, an Israeli political blogger. “When I saw this very long green train, and people are behind a fence next to the train and saying we want freedom, I feel like I’m seeing a Holocaust documentary.’’ Ms. Schneider adds that the television interviews with Syrians humanized a people Israelis have regarded as a long-time bitter foe.

“They were very fluent in English, they were middle class,” he says. “They weren’t the kind of enemy that we always think about.’’ Talk of admitting Syrian refugees also has stirred demands over another refugee controversy for the Jewish state: Palestinians displaced after 1948. Earlier this week, the Palestinian representative to the UN called on the international community to force Israel to admit Palestinian refugees from Syria into the West Bank.

While neighbors in Lebanon, Jordan, and Turkey are straining after having absorbed 3.6 million Syrian, Israel’s policy has been to keep its distance. To prevent spillover of migrants or militants, it constructed a new, less porous border fence on the Golan Heights starting in 2012. Though no refugees have been allowed to stay in Israel, the army has set up field hospitals on the Golan Heights and has admitted temporarily some 1,000 Syrians in need of urgent medical care for treatment.

Beyond the modest direct assistance to Syrian refugees, Israel’s government has been helping indirectly by giving neighboring Jordan a boost through agreements to supply extra water and electricity to alleviate strains on the Hashemite kingdom’s infrastructure, says Oded Eran, a former Israeli ambassador to Jordan.

However, the former diplomat believes that the government needs to prepare contingencies for a potential larger involvement in the Syrian crisis, such as considering no-fly zones, or protecting Syrian Druze and Kurdish minorities. “The government has to have a more comprehensive response, even though it’s a theoretical response,’’ he says. “For the time being no one is running to Israel for cover.”