EU ministers pushed through a deal to relocate 120,000 refugees on Tuesday, but rode roughshod over fierce opposition from central and eastern states in a major blow to unity in the bloc. In a move that deepens bad blood over the biggest migration crisis since World War II, Hungary, the Czech Republic, Romania and Slovakia all voted against the plan while Finland abstained.

“Very soon we will find that the emperor is naked. Common sense has lost today! :-(” disappointed Czech Interior Minister Milan Chovanec tweeted after emergency talks in Brussels. The hotly debated proposal will see European Union countries forced to take a share of thousands of new arrivals from Syria, Afghanistan and Eritrea who are currently in frontline EU states like Greece and Italy.

The ministers were under pressure to reach a deal that could be ratified by EU leaders at a crisis summit on Wednesday, but in a rare step for a bloc that is keen to show a united front, the agreement was by a majority vote instead of unanimity. “Decision on relocation for 120,000 persons adopted today, by large majority of member states,” the EU’s Luxembourg presidency said in a tweet.

Officials said the relocation deal covered 66,000 refugees who would be moved from Greece and Italy plus another 54,000 who had previously been earmarked to be relocated from Hungary before it refused to back the plan. Hungary and its eastern partners oppose the plan because they say Brussels has no right to make them take in thousands of people, and to do so amounts to a violation of their national sovereignty.

“It’s not a perfect deal but it’s one that will allow us to start working on the problems we’re facing,” an EU diplomat told AFP.

The UN and other international organisations had warned it was the “last chance” for increasingly overwhelmed European states to agree on how to cope with the huge tide of people fleeing conflict in the Middle East, Asia and Africa. EU Migration Commissioner Dimitris Avramopoulos had warned that the bloc faced an “existential crisis”.

On the eve of the talks, UN chief Ban Ki-moon urged leaders across the EU to “show leadership and compassion” as the continent grapples with the unrelenting wave of migrants.

Many of them are refugees like Abdullah, a 35-year-old Syrian father of two from war-ravaged Aleppo. “We have no choice but to leave. We are dying here every day,” he told AFP in Istanbul where he has worked odd jobs for three years to save money for a journey across Europe he hopes to make soon.

More than half a million people have already braved dangerous sea crossings and arduous land treks to make it into Europe this year, heaping pressure on countries along the migrant trail, some of which have closed their borders while others have diverted the flow elsewhere. Some 2,800 people have died this year trying to cross the Mediterranean in flimsy boats.

But tensions have kept boiling over, with fears the EU’s cherished Schengen passport-free zone could be under threat from the tide of migrants, many of whom are trying to make their way to Germany.

Budapest has taken the toughest stance on the crisis, erecting razor-wire barriers along its borders with Serbia and Croatia in a bid to keep migrants out and enacting new laws to jail illegal migrants. On Monday, lawmakers voted to give troops at Hungary’s borders the right to use rubber bullets, tear gas and net guns – devices that fire netting to entangle the target – in a non-lethal way “unless it cannot be avoided”.

German rail operator Deutsche Bahn meanwhile said it would suspend key services to and from Austria and Hungary until October 4, citing border controls introduced to manage a record migrant influx. Meanwhile Croatia’s prime minister urged non-EU Serbia to restart directing migrants towards Hungary and Romania to help ease the burden on his country after it dealt with a surge in numbers this week.

Greek Prime Minister Alexis Tsipras, whose country is one of the main landing points for refugees crossing the Mediterranean, meanwhile called for responsibility to be shared, saying “otherwise there is no point in talking about a united Europe”.

But Greece, whose debt crisis threatened to to tear apart the eurozone just months ago, is likely to face pressure at the emergency summit to accept more help in managing its borders, which could raise concerns in Athens over national sovereignty. 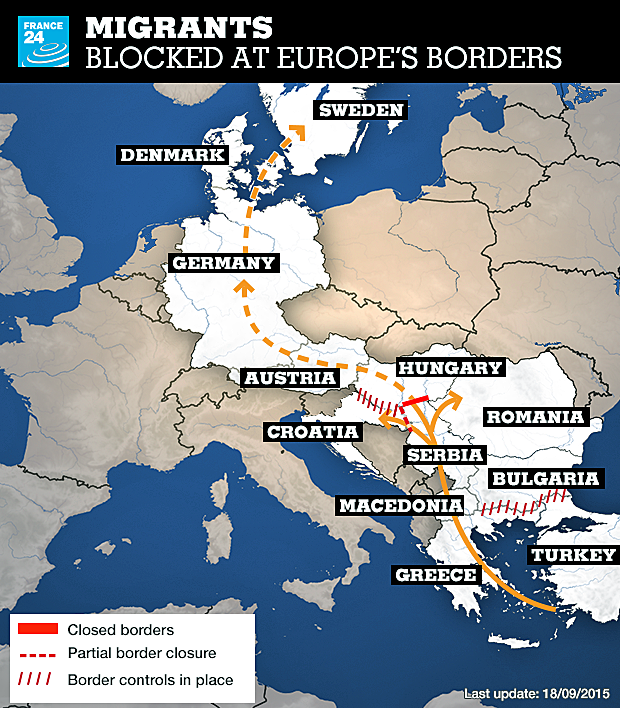