When Nigeria first unveiled incentives for carmakers to set up plants its auto industry had ground to a standstill.

Fast forward two years, and there are at least 36 automakers with production licenses in the continent’s biggest economy, with Volkswagen AG, Nissan Motor Co. and Ford Motor Co. already making vehicles with local partners. The country is seeking to join South Africa as the only manufacturing base for the car industry in sub-Saharan Africa, with countries from Ethiopia to Uganda hoping to follow suit.

“Africa really is the last automotive frontier,” Mike Whitfield, Nissan’s head of sub-Saharan Africa, said in an interview. “You still have a very un-motorized population.”

Vehicle ownership on the continent is estimated by the International Organization of Motor Vehicle Manufacturers at less than 50 per 1,000 people, compared with about 800 in the U.S. Demand for passenger cars in particular is growing in sub-Saharan Africa, as road conditions and fuel quality improve and young populations with disposable income seek mobility, Whitfield said.

For now, new-vehicle sales in sub-Saharan Africa are minuscule by global standards and almost all cars purchased outside South Africa are imports, many of them second hand. While automakers in Nigeria have started final assembly of light vehicles including Ford’s Ranger from imported kits, it’s still a long way to full scale manufacturing.

Developing a large-scale automotive industry will require reducing the flood of used cars into the region and developing local manufacturing and supply of components, said Anthony Black, an economics professor at the University of Cape Town. 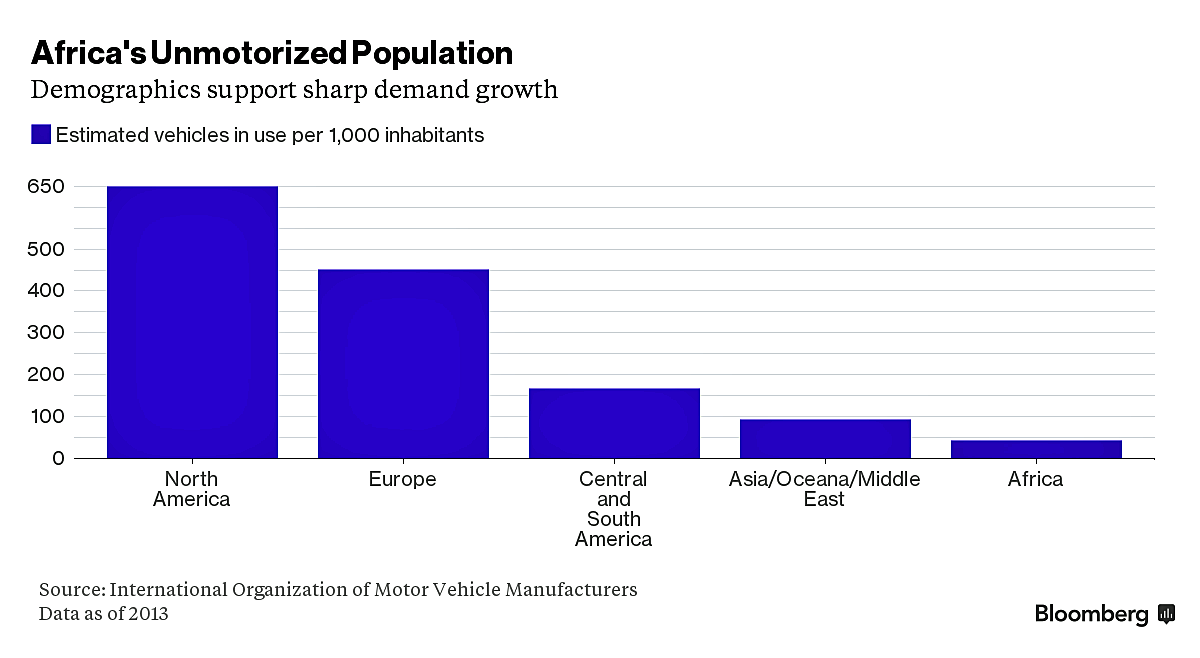 “You need regional integration, you need appropriate policies in the auto sector and you also need to upgrade infrastructure and skills,” he said.

A group of global automakers recently created an African Association of Automotive Manufacturers to coordinate efforts and advise governments on policies, Jeff Nemeth, the chief executive officer of Ford in sub-Saharan Africa, said in an interview. The group is in talks with Nigeria on how best to attract suppliers of parts to the country, he said.

“We’ve done this many times in different countries all over the world,” Nemeth said. “We’ve seen the good policies and the bad policies, what works well, what works not as well.”

Nigeria’s not the only African country trying to promote domestic vehicle production and automakers are hoping their new association can help coordinate policies and investment in the region, Nemeth said.

“Everybody can’t have an assembly plant at once,” he said. “The idea would be having some kind of pan-African trade arrangement, where maybe we build engines in Uganda but put them in vehicles in Nigeria and then ship the vehicles back to Uganda, duty free.”

The only sub-Saharan African country with any real automotive production is South Africa, which has used government incentives to attract manufacturers. The local industry body is projecting record automotive exports this year of 344,000.

Nigeria, which is hoping to emulate that success, had a flourishing automotive sector in the 1970s that floundered. It’s now seeking to revitalize the industry to diversify the economy away from oil as crude prices fall. Nigeria has allowed companies to import two fully-built vehicles at reduced duties of 35 percent for cars and 20 percent for commercial vehicles for every one built locally, while 100 percent importers pay a full 70 percent duty.

The government is focused on assembly operations for now, with the idea that components manufacturing will follow as the industry develops critical mass, said Luqman Mamudu, the director of policy and planning for the Abuja-based National Automotive Council.

Ford projects that the automotive industry in Africa will grow by at least 40 percent by 2020, said Nemeth.

“The opportunities are massive,” he said.