In early November, I took the Eurostar from St Pancras in London to Calais. We left at dawn and a pallid fog hung across the English sky like white bedding sheets strung across row house laundry lines.

The other passengers in my carriage wore expensive suits and looked preoccupied with sales quotas, market shares and the prospect of their annual Christmas bonuses. I was heading to the refugee camp known as the “Jungle” by its residents, because it lacks sanitation, health care or adequate living quarters. I felt sad and angry about the way we ignore suffering through distraction.

I recalled my first journey to the Continent in the dying months of the Second World War. I was 21. It was winter and I was travelling with my RAF unit in the hold of an ancient, rusting troop carrier to the freshly liberated Belgium. Waves battered our ship; there was further danger from limpet mines and lone-wolf U-boats. I hoped that I would live to see the end of the terrible war that had turned Europe into an abattoir. But when peace arrived, I realised that, for many, the spring of 1945 was as deadly and dangerous as Hitler’s blitzkriegs. 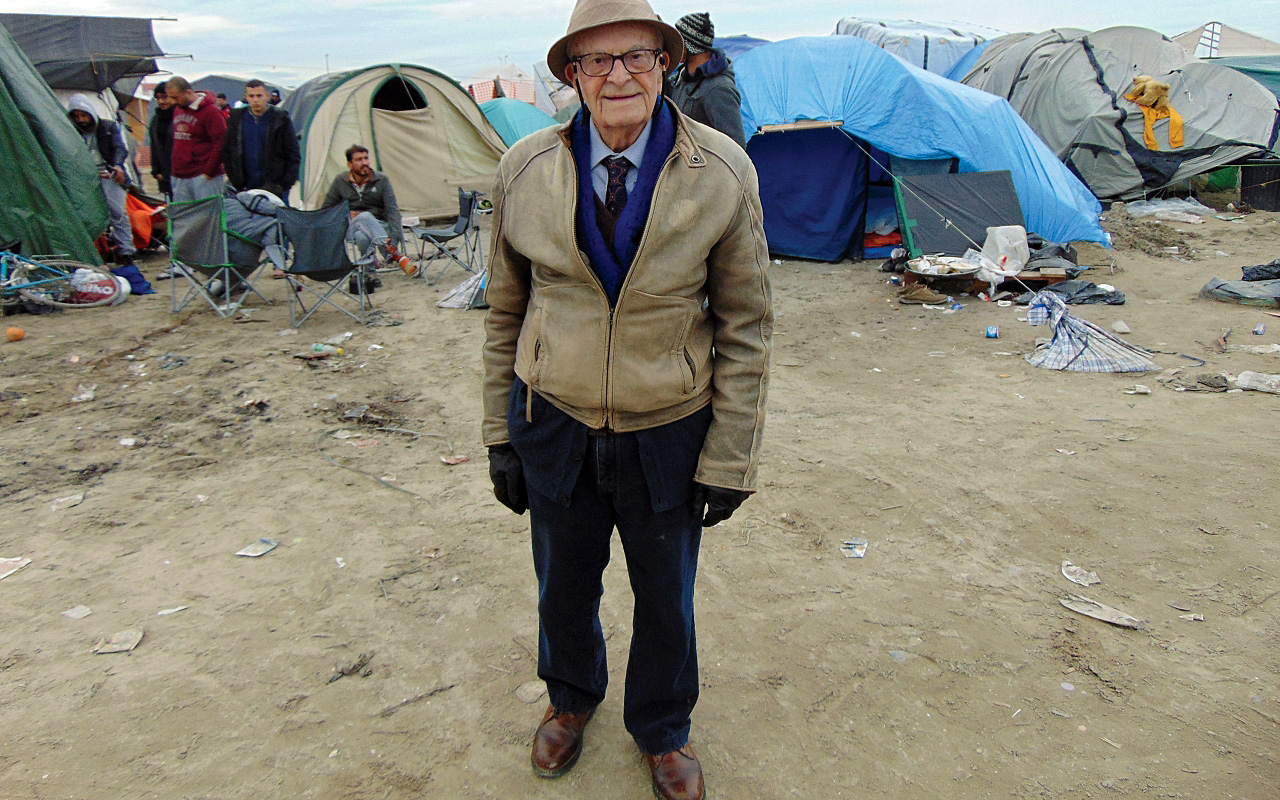 The armistice was barbed with the thorns of a refugee crisis, with more than 20 million people swept away from their homelands because of the fighting, the threat of reprisals from foreign armies and the prospect of starvation. Seventy years on, I can recall with vivid clarity how the crisis flowed across Europe like a tidal surge of despair. I caught my first sight of the refugees from the back of an army truck: hundreds of civilians with cardboard suitcases, walking wearily beside the road. Some had fled the Soviet or German armies. Others were former slave labourers – desperately thin and wearing tattered prison uniforms and workers’ clogs – traipsing back towards the land of their birth or to a displaced persons’ camp. All were homeless, many were stateless, and each face I glimpsed seemed to carry an expression of terror.

When we could, we gave them food or cigarettes but in truth there was little time to help because our objective was to secure the Hamburg aerodrome and make it operational for RAF fighter planes. It was not until we occupied Germany’s second-largest city that I understood the hardship that those refugees endured. Hamburg had been destroyed by the Allied air war that killed 50,000 civilians there alone – more than all the causalities the Luftwaffe had inflicted on Britain during the war.

Mile upon mile of apartment blocks had been reduced to heaps of broken concrete or fire-ravaged shells. Many residents of Hamburg lived in the gutted basements of their apartments or moved to squatters’ camps such as the one adjacent to the airfield where I was stationed. The camp included refugees from all over eastern Europe: they had been driven from their homes first by the fighting and then by the division of the Continent between Russia and the West. It reminded me of the slums in which I had grown up, except its structures were made of scrap wood, sheets of metal and tarpaulin instead of Yorkshire stone. It was rank with filth, the smog of open fires and the pungent aroma of human sewage. I marvelled at the inhabitants’ attempts to retain their dignity by trying to create a community: a school constructed from bomb debris and cobblers and tailors working out of tiny shops.

In January 1946, a famine known as the grosse Hunger (“great hunger”) descended on Germany. The British government, the army, civilians and the Red Cross tried to limit the suffering with aid and donations of food and clothing. Over time, displaced persons’ camps were erected as an interim solution before people could return to their homelands or, if that was not possible, be resettled in the US, the Commonwealth, Britain, or other European countries. Some had to wait for years to find a safe place to call home but the camps provided care, sanitation, educational services and vocational training.

There is no doubt that these camps set up by Britain and the Allies alleviated the refugee crisis that my generation faced. Indeed, I remember a friend of mine who was a refugee from Serbia telling me in the 1950s how grateful he was for the Red Cross food parcels that he and his brother received in a camp on the outskirts of Vienna. To him, the food represented more than nutrients – it made him believe that the outside world wanted him to live.

As my train emerged from the tunnel and entered France, I thought again of my long-dead Serbian friend – a beneficiary of the proactive, generous and prudent refugee policy instituted by western democracies after the war – and wondered what he would make of the current crisis.

Most of today’s politicians in Britain seem to have a different opinion of immigration, refugees, the consequences of war and the responsibility for peace. Nothing illustrates this better than the fencing at the port in Calais and the nearby Channel Tunnel terminal in Coquelles – built at the cost of £7m to British taxpayers, on the orders of the Cameron government. Its purpose is to keep refugees from riding the rails or hiding in the holds of ships as they seek sanctuary and a better life in Britain.

Viewed from my taxi, the fence stretched into the distance like the Cold War barriers that separated East and West Germany. I remembered another time and another group of people who clamoured to leave an unhealthy society. But then, unlike today, we tore down walls between people and nations. I can’t turn away from the heartache caused by this crisis, which is why, at the age of 92, I came to Calais.

The Jungle is a squalid encampment that, over a couple of square miles of discarded industrial land, holds 6,000 refugees and economic migrants from countries including Afghanistan, Iran, Ethiopia and Sudan. It exists only because the world is a desperate, unequal and unfair place for most of its inhabitants.

People in the Jungle live mainly in tents, or shanties made with discarded rubbish and donated lumber. Everything looks temporary, forlorn and hopeless – like a settlement built in a poor country after a natural disaster. There are few amenities and little water, making it hard for people to keep clean, despite their best efforts. Yet they have tried to build a community: there is a school, a library and places of worship for Christians and Muslims.

Amid this squalor, a wooden structure that can seat more than 30 people is a remarkable sight. The Ethiopian Coptic church that my volunteer guide showed me was constructed from plywood and resembled one of the many churches built on the American prairie during the 19th century by European settlers who were desperate for a better life. Even to me, an old man with little faith, it looked reassuring.

Up the road, a group of young men huddled around a small fire of sticks and cardboard, trying to warm their bones after a damp night of sleeping rough. Further on, near an Afghan café that was constructed from scrap wood and served hot chai made with condensed milk – the taste of a distant homeland – a group of gendarmes in riot gear and with menacing stares marched past.

Exploring the camp, I eventually met a young South Sudanese man who told me about his journey to Europe. With dignity, he explained that he had left his country not for money, education or better clothes, but to escape death in civil war. In so many ways, he reminded me of my best friend, who had fled Poland to avoid being enslaved by the Nazis in 1939. Like the South Sudanese young man, my friend walked through many countries before he reached Britain in 1940.

Later, I encountered more gendarmes standing beside their paramilitary vehicles, while off to the side a lone refugee began to eat a leaf from a plant growing in a ditch. There is real hunger at the camp. It receives little government support and local charities are only able to provide one meal a day for the residents.

The air grew cold and I felt weary for all of these people, trapped in a place that, in essence, isn’t in Europe, the Middle East or Africa but is instead a kind of hell on earth, because no government including our own cares for them.

The road around the camp seemed endless to my old body and I felt overwhelmed by all the suffering. I made preparations to return to London – to society, a meal at a good restaurant and a good night’s sleep in a hotel. What all of that costs could amount to half a year’s wages for these refugees in their country of origin.

Before I left, I watched a young boy aged around 11, an orphan, kicking a football and laughing. Will he have the opportunity to live long enough to talk about his turbulent youth and the greatest refugee crisis to strike Europe since the Second World War?

The world has changed since I was young. It has not grown harder: just more foolish and selfish. I have seen camps like the Jungle before – at the end of the war. But back then, there was a desire among ordinary citizens and their leaders to alleviate the plight of refugees. Today, it is different. The common will to do good, or at least maintain a decent society for all, has vanished. Our politicians – and we, the ordinary people – are ignoring our moral, political and human responsibility to be our brothers’ keepers. In the end, the only thing that separates us from those who live in the Jungle is luck – and any gambler will tell you that this can change at the turn of a card.

Harry Leslie Smith is the author of Harry’s Last Stand

and Love Among the Ruins