Towards the end of 1985, at the height of the worst famine in modern Ethiopian history, Margaret Thatcher contemplated helping to topple the Ethiopian government. The documents – marked Top Secret and Personal – have now been placed in the National Archive: 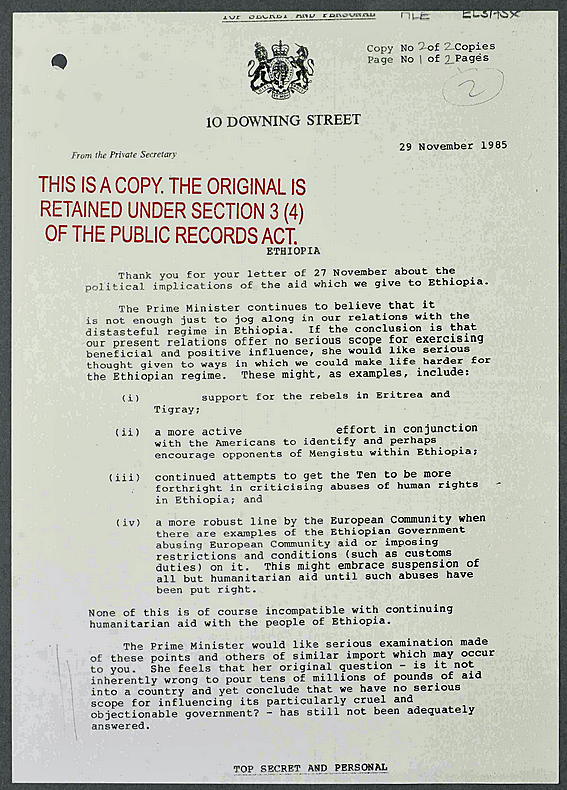 The British prime minister had long made no bones about how much she disliked the military regime led by Colonel Mengistu Haile Mariam. The British government was among the most generous donors to the Ethiopian famine appeal, but the regime itself – Marxist and pro-Soviet – was exactly the kind of authority Thatcher loathed.

By late 1985 the prime minister’s patience was wearing thin. Charles Powell, her private secretary, wrote to the Foreign Office asking what steps might be taken. The FCO, taking is normal, cautious approach wrote back on 27 November saying that: “Barring an assassin’s bullet, Mengistu looks secure, and the opposition movements inside and outside Ethiopia remain deeply divided. The choice is between seeking to influence the present regime, and a policy of containment.”

This did not satisfy Thatcher at all.

“The Prime Minister continues to believe that it is not enough just to jog along in our relations with the distasteful regime in Ethiopia,” came the reply from her private office, just two days later. “If the conclusion is that our present relations offer no serious scope for exercising beneficial and positive influence, she would like serious thought given to ways in which we could make life harder for the Ethiopian regime. These might, as examples, include:”

The letter then lists four options – the first two of which were explosive.

“i) support for the rebels in Eritrea and Tigray;

The other two options were more conventional: asking other western powers to criticise the Ethiopian government and taking a “more robust line” when examples emerge of the abuse of aid.

The Foreign Office – and Geoffrey Howe as foreign secretary – must have found these suggestions very hard to digest. Certainly it took some more than a month for a suitable response to be drafted. “The Foreign Secretary agrees that jogging along with the Ethiopian regime would not be right,” came the reply on 10 January 1986.

But, noting that some progress was being made, the Foreign Office urged caution. Backing the rebels would – Sir Geoffrey believed – not work, driving Mengistu further into the arms of the Soviets and (a killer argument with Mrs T) it was also noted that the Eritrean and Tigrayan rebel leaders were “…as extreme in their broadly Marxist political attitudes as the Derg [the Ethiopian government].”

The letter concludes: “We do not believe that support for the rebels would work to our advantage.”

What is interesting to note is that the British government was – if this correspondence is to be believed – unaware that aid that international charities were providing through the Sudan based rebel movements was already being diverted to purchase weapons. A programme I produced for the BBC in 2010  detailed this evidence.

Bob Geldof objected – saying that none of Band Aid’s money had gone astray (a suggestion the programme never made). The BBC Trust apologised to Geldof for the apparent mistake.

I was subsequently contacted by the head of a major British aid agency who substantiated the claims that aid had gone astray, without commenting on which agency’s resources had been used to buy arms and ammunition.