Robert Mugabe has castigated factions within his ruling Zanu-PF party, in an apparent attempt to quell feuding among rivals jostling to succeed him.

Mugabe, who has ruled Zimbabwe as president since 1980, marked the party’s annual congress with a show of authority by speaking on his feet for an hour and a half, despite turning 92 next February.

Among those who could battle to take over are his wife Grace, 50, and his two vice-presidents, Phelekezela Mphoko and Emmerson Mnangagwa.

“There is none of us who is a better comrade than another,” Mugabe told an audience of several thousand in the western resort town of Victoria Falls. “We don’t want to hear people saying: ‘These ones belong to Mphoko, these ones to Mnangagwa.’ If all people belong to factions, who then are mine?

“We had come to a point where there were some in the military, the police and the intelligence services joining factions. Let’s stop that.”

Mugabe, who wore a floral yellow jacket decorated with party symbols and his image, was flanked by Grace, who wore a dress with similar motifs.

“Your ambition should not divide the people,” he told the meeting of party loyalists. “People don’t belong to factions. They belong to Zanu-PF. We cannot succeed if we continue quarrelling and quarrelling.”

Mnangagwa is widely seen as positioning himself for Mugabe’s post, while former deputy president Joice Mujuru, who was ousted last year, is also a potential challenger.

Speculation has grown that Grace Mugabe also harbours ambitions to take power. However, she recently said that she had no further wishes beyond being the president’s wife, and said she would “put Mr Mugabe in a wheelchair” and take him to stand in elections next due in 2018.

Grace was appointed leader of Zanu-PF’s powerful women’s wing last year and went on a campaign that led to the expulsion of Mujuru, whom she accused of fomenting division as well as corruption and practising witchcraft.

The president, who has been accused of brutally quashing dissent for decades, has never named a preferred successor.

Zimbabwe’s economy has been in crisis since land reforms starting 15 years ago drove many white farmers off their land, to be taken over by black farmers.

Read more: Don’t mess with Grace Mugabe – she could be the next president of Zimbabwe 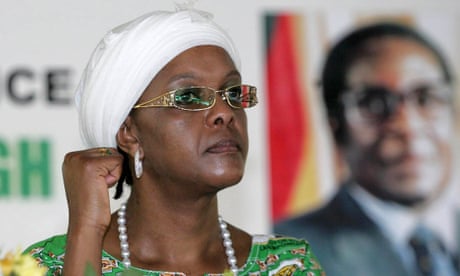