LONDON — On Friday, Rwanda votes in a referendum to amend its Constitution to allow President Paul Kagame to seek a third term. If it passes, as is likely, Mr. Kagame will be eligible to run in the 2017 presidential election. His victory in that contest is all but guaranteed, giving him another seven-year term and opening the way for two five-year terms after that, possibly keeping him in power until 2034.

With this vote, Rwanda must decide whether it will create a political space in which contentious issues can be resolved peacefully, or continue the cycle of autocracy, repression and conflict in which it has been trapped since independence in 1962. If the constitutional modification passes, all indications are that it will have chosen the latter path. International donors, on which Rwanda depends, must signal their strong disapproval, and pressure Mr. Kagame to step down when his current term expires.

The true extent of popular support for Mr. Kagame is anyone’s guess, since media freedom in the country has been almost entirely eroded. Polling conducted by lawmakers purported to find only 10 individuals among the millions of Rwandans who were canvassed who said they opposed changing the Constitution to extend Mr. Kagame’s leadership. Frank Habineza, who heads the main opposition Democratic Green Party, has been a vocal critic, but the fact that so few others have publicly expressed concern indicates the near-total control Mr. Kagame exerts over Rwanda, through a combination of repression and omnipresent surveillance. 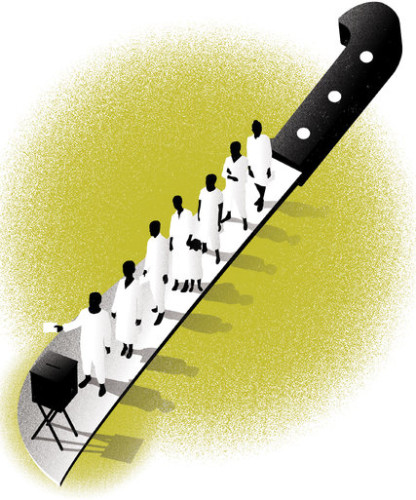 Since the 1994 genocide, Rwanda has not seen any formal power-sharing or meaningful peace negotiations between Hutus and Tutsis. The International Criminal Tribunal for Rwanda is closing after 21 years, having indicted only 93 people out of thousands involved in the genocide. The gacaca system, a means of postconflict resolution in which low-level genocide suspects were prosecuted in community courts, was highly controversial, often resulting in unfair trials.

Instead, since becoming president in 2000, Mr. Kagame has focused on economic development as a means to move beyond ethnic division and overcome conflict. In many ways, this strategy has worked. Rwanda has seen nearly 8 percent economic growth over the last decade; over 90 percent of Rwandans have health insurance; life expectancy and literacy rates have increased. These successes may explain why, of Rwanda’s key donors, only the United States has firmly opposed the constitutional change. The European Council has said the proposed amendment “weakens the credibility of the constitutional reform process,” but no European country has unilaterally opposed it. No government has threatened to review aid to Rwanda.

To be fair, Mr. Kagame never claimed to be a democrat. And he has pointed, rightly, to the devastating failure of Rwanda’s last experiment with multiparty democracy in the early 1990s. But a strategy that sidesteps democratization, human rights and reconciliation in the pursuit of economic development is reckless — as is the international community’s gamble on its success.

Like most aging dictatorships, the Kagame regime has gradually tightened the trusted inner circle on which its immediate survival depends. The more competent and moderate members of his Rwandan Patriotic Front, like the former cabinet affairs minister Protais Musoni and the former justice minister Tharcisse Karugarama, have been replaced with more loyal or submissive officials. Several of Mr. Kagame’s one-time allies have fled the country; one of them, Col. Patrick Karegeya, was murdered in South Africa last year. In the R.P.F.-dominated government, the informal ethnic balance between Hutu and Tutsi ministers, which was always tenuous, has all but disappeared.

Other measures recall the increasing predation by President Juvenal Habyarimana’s inner circle in the years before the genocide. In 2013, for instance, the Kagame government seized assets controlled by the exiled millionaire Tribert Rujugiro Ayabatwa. While it is true that petty corruption has been effectively contained, the near total fusion of party, state and army makes it difficult to distinguish between public and private wealth at higher levels of the regime.

The government is also more comfortable with highlighting ethnic differences when it serves its interests. Since 2008, it has referred to the 1994 genocide as the “genocide against the Tutsi.” Given Rwanda’s official ban on ethnic labels, the renaming polarizes an already delicate discussion around this sensitive part of Rwanda’s history and minimizes the sacrifice of the many moderate Hutus, including many R.P.F. members, who died defending Tutsis. In neighboring Burundi, the decision in April by President Pierre Nkurunziza to seek a third term has plunged that country into chaos. A recent report by Refugees International suggests that some Rwandans have been complicit in the recruiting of Burundian refugees in Rwanda into “non-state armed groups.”

While many dictatorships have experienced periods of strong economic growth, in only a few cases has that growth resulted in the kind of full-scale societal transformation Rwanda is betting on. In fact, as Peter Uvin notes in his book “Aiding Violence,” Rwanda was a development success story and a donor darling in the 1980s and early ’90s, before it all came tumbling down.

s impressive as Rwanda’s growth has been in the past 20 years, we should not forget that the first 10 were spent catching up to pre-genocide levels. Rwanda remains the second-poorest country in the East African Community in terms of per capita gross domestic product, according to the World Bank. Foreign direct investment lags behind that received by its neighbors. And questions have emerged about the reliability of official statistics, making it harder to assess the country’s economic success.

It would be naïve to take comfort in Rwanda’s current veneer of stability, as history has proven that in this region, things can change very quickly. This is all the more true given the unrest in Burundi, which is bound to increase ethnic tensions in Rwanda. If the international community is to never again let the region slip into cataclysmic ethnic strife, it must refuse to accept Mr. Kagame’s constitutional modifications. Should another cycle of violence begin, it will be almost impossible to stop.