Al Jazeera examines how the death of a Tunisian street vendor led to a wave of uprisings across the Arab world.

This film was first broadcast on Al Jazeera English in March 2011. 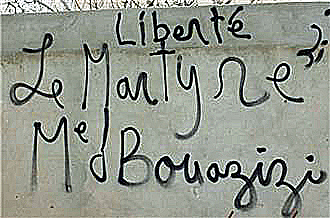 On December 17, 2010, Mohammed Bouazizi set himself on fire in the small provincial Tunisian town of Sidi Bouzid. According to his family, the 26-year-old street vendor had been stopped by a local official who, when he was unable to pay the bribe she demanded, confiscated his goods and slapped him twice across the face.

It was one humiliation too many for a young man already struggling to survive and, unable to recover his goods, he poured fuel over himself and struck his lighter.

With youth unemployment over 20 percent there was a depressing familiarity to this story and Mohammed was not the first young man to take his life in Tunisia’s impoverished and forgotten south.

President Zine Abidine Ben Ali’s dictatorship had however perfected its system of repression and censorship over 23 years.Local officials acted with impunity and protests like Mohammed’s never saw the light of day, or if they did, they seeped out as rumours days or weeks later.What made this story different was the fact that Mohammed’s cousin Ali filmed the immediate aftermath on his mobile phone and posted the video on his Facebook page.

On the same day Mohammed set himself on fire, hundreds and then thousands saw stark evidence of the brutality of the regime and for many, a reflection of their own sense of despair.

Ben Ali may have had complete control of the state media but broadband internet and the ability of its users to share images online had created an insurmountable problem for his regime.

Newspapers and television could be controlled, international satellite channels could be discredited but citizen journalists could neither be monitored nor effectively censored. Most mobile phones now had cameras, many had video. Added to this, social networking sites meant that images could be spread to thousands with the click of a button.

The protests which followed across Tunisia, at first small, but gradually gathering momentum, forced Ben Ali to fall back on the other element of his regime that he had perfected over 23 years, repression, with bloody consequences.

Losing all sense of fear

Mohammed Bouazizi’s self-immolation and the demonstrations which followed might have caught the public imagination, but protest in Tunis remained unthinkable for most. Ben Ali’s interior ministry, the headquarters of a police state of more than 200,000 agents, was still in control.

Further demonstrations in the south led to the shooting dead of several protesters and ultimately to people coming out on to the streets of the capital. It was at this point that Ben Ali decided it was time to apply his personal touch.

On the January 28, he visited Mohammed Bouazizi in hospital. As a publicity stunt it was a poorly staged, the apparently concerned president appearing without a mask in a sterile burns unit.

Ben Ali’s speech to the nation a few hours later was no less misjudged. He blamed the protest on foreigners and agitators and promised that those guilty would be punished, a thinly veiled threat to his people.

On the January 4, Bouazizi’s death was announced and the family was allowed to take the body on the condition they kept quiet. However, thousands attended the funeral in Sidi Bouzid, sparking a fresh wave of protests.

Ben Ali recognised that the population were losing their fear and decided to deliver a lesson in terror. He deployed sniper units in the southern town of Kasserine, it seems with orders to shoot to kill. There are still no accurate casualty figures but at least 20 people were shot dead and the injuries caused by the use of military weaponry were horrific.

Once again these images spread out across the web and, instead of being a lesson in terror, Kasserine merely served to show Tunisians the extraordinary bravery of their countrymen. Ben Ali addressed the nation again. He admitted that mistakes had been made, but not by him. He would make sure that those responsible would be held accountable. Like all dictators, he could not comprehend that it was not about his ministers, his policies or even his rapacious family. It was about him.

Protests now broke out across the country. Ben Ali deployed the army with orders to shoot to kill, orders refused by both, the army and its commander. Police snipers were less scrupulous and as with Kasserine, live fire took the lives of many. Twenty-eight deaths and more than 100 injuries were recorded in Tunis’ central hospital alone.

Without the support of the army, even Ben Ali understood that personal concessions needed to be made. In his third speech to the nation, he pledged not to stand for re-election in 2014. He also abandoned classical Arabic in favour of the Tunisian dialect. He reminded the nation, as if it needed reminding, of his long service as president, his military career.

He had been betrayed and let down by those close to him, he regretted the loss of life and promised there would be no more live ammunition. A night time curfew had been declared but Ben Ali sent his partisans on to the streets in what was intended to appear as a spontaneous celebration of his speech. They targeted neighbourhoods that defied the president, looting and shooting through the night, a final throw of the dice.

Tunisians had lost all sense of fear and on January 14, tens of thousands took to the streets of the capital to demand the president’s departure. After 23 years however, few could imagine a Tunisia without Ben Ali.

When at 7pm, Mohammed Ghannouchi, Ben Ali’s prime minister, announced the president’s departure, many enjoyed mixed emotions, a sense of shock, grief for those who had died, but joy and pride at what they had achieved.

The future for Tunisia remains uncertain, and substantial political and economic problems persist. But for the first time in the country’s modern history this is a future which rests not in the hands of one man, but of an entire nation.