Scores are killed as members of the Oromo minority protest a plan that they fear will take their lands.

WENCHI, Ethi­o­pia — The cows are back in the valley near the village of Wenchi in Ethiopia’s highlands, after being driven out five years ago by the arrival of a Dutch agricultural company.

They returned in the past few weeks, after villagers burned the warehouses filled with seed potatoes that were to be planted on communal grazing lands that authorities had turned over to the Solagrow PLC company.

This attack is among dozens of demonstrations taking place for the past two months across Ethiopia’s Oromo state, which comprises a third of the country.

Protesters from the Oromo ethnic group say the government is trying to take away their lands and use them for everything from industrial development to luxury housing projects.

The response has been harsh, with Human Rights Watch estimating that 140 people have been killed by security forces using live rounds to quell the protests. The demonstrations are threatening Ethiopia’s goal of transforming itself into a new industrial and agribusiness powerhouse for the continent and harming its reputation for stability. 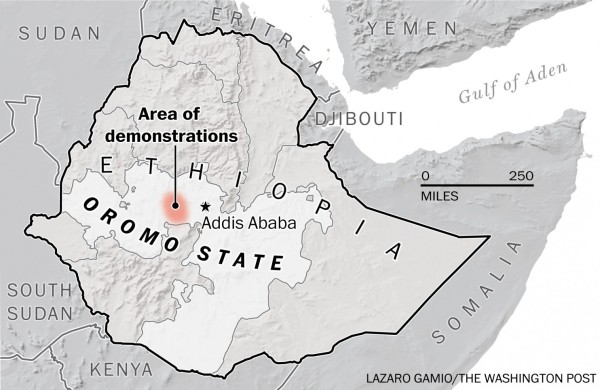 The violence has also earned Ethiopia a rare rebuke from the U.S. government, which considers it a key ally in the fight against terrorism.

“We were protesting peacefully and marching around the town when we heard about the deaths in the other villages, and so we became angry and attacked the farm,” said 27-year-old Drabuma Terrafa, standing near the charred remnants of a Solagrow potato warehouse.

Ethiopia’s federal police and army counterterrorism units have poured into the state. In more than a dozen interviews, people described arbitrary arrests, beatings and killings by security forces.

“I think the strategy is to terrorize people by shooting them point blank,” said Merera Gudina, the chairman of the opposition Oromo Federalist Congress party.

Known for poverty and famine in the 1980s, Ethiopia in the past decade has seen annual economic growth rates of more than 10 percent, fueled by massive infrastructure projects and efforts to industrialize a predominantly rural economy.

In the capital of Addis Ababa, nearly every street features a high-rise under construction, and in the past 20 years, the city’s population has increased by 80 percent, edging toward 4 million. It is expected to double in the next few decades.

Addis was established 150 years ago by Ethiopia’s dominant Amhara people in the heart of Oromo territory, and its expansion has come at the expense of the local Oromo farmers. The announcement of a “master plan” to manage the city’s expansion was seen as the latest attempt to take more land.

In interviews in villages across the Oromo region, young students and aging farmers said the unrest was because of the plan. But there is a deeper vein of dissatisfaction among the Oromo people, who make up some 40 percent of the country’s population of nearly 100 million.

Oromos feel they are treated like second-class citizens and complain that corrupt local officials demand bribes and make money off shady land deals that don’t give farmers enough compensation.

In a sign of how deep the grievances are, the protests are not just in the areas close to the capital that would be affected by the master plan.

Terrafa, the demonstrator in Wenchi, said that villagers were angry because the grazing land had been taken away with no compensation. Jan van de Haar of Solagrow said in an email that since no one owned the land, no compensation had been paid, but that the Dutch company had worked peacefully for the past six years.

“If there was ever any argument, we used to discuss and solve it with the Wenchi elders,” he said.

In the town of Asgouri, 37 miles from Addis, locals attacked a commercial flower farm during the protests and destroyed the generators and refrigeration room. Some of the attackers included farmers, who said they had lost their land to the business and received inadequate compensation.

“People are protesting because they are dissatisfied with the government — when we give them our demands, they don’t respond,” said Tarecha Guttama, a farmer in Asgouri.

Like most people interviewed, he listed electricity and running water — rarities outside the town center — as the main demand.

Surrounded by the three generations of family he supports on his farm, he said he can’t even imagine what he would do if the order ever came to confiscate his land for an investment project. “They would have to take us by force,” he said in the shady clearing ringed by eucalyptus trees next to his house, made of wood faced with mud.

Oromo authorities announced on Wednesday that the master plan would not be implemented. But that may not stop the demonstrations.

The regional center of Woliso witnessed some of the largest protests in the area in mid-December, said Seyoum Teshome, a lecturer at the local university.

He said the protests were peaceful until the feared federal police appeared and started firing tear gas and live rounds, after which the crowds went on a rampage, targeting the property of government officials.

“The damage itself indicates what was the real problem,” Teshome said, adding that under the country’s authoritarian system, the people have few ways of making their grievances heard. “They (the Oromo) use the master plan to demonstrate their grievances and frustration with the poor administration,” he said.

In legislative elections in May, not a single opposition candidate won a seat, prompting accusations of widespread vote fraud by the ruling party.

Reda, the spokesman for the Ethio­pian government, said the master plan has been misunderstood and the Oromo people are victims of poor local government, which national authorities will address.

“There have been areas where the government has identified serious challenges in terms of good governance and delivery of services,” he said, acknowledging that compensating farmers for confiscated land has often been mishandled. “It’s not entirely surprising that people have grievances.”

He said there were already plans underway to remove corrupt officials.

The U.S. government has rebuked Ethi­o­pia over the use of counterterror troops, the death toll and the imprisonment of students, activists, journalists and politicians in connection with the demonstrations.

In recent weeks, it appears the number of killings has declined and army troops in some towns and villages have withdrawn to their barracks in favor of the local police forces.

In Wenchi, however, the arrests continue, Terrafa said.

He said one of his friends is recovering at home after being shot in the leg when soldiers opened fire a few weeks ago, while another man he knows was killed.

“I am ready to sacrifice my life for the cause of my people,” he said, promising to continue the protests.