WHEN Egyptian politicians discussed sabotaging the Grand Ethiopian Renaissance Dam in 2013, they naturally assumed it was a private meeting. But amid all the scheming, and with a big chuckle, Muhammad Morsi, then president, informed his colleagues that their discussion was being broadcast live on a state-owned television channel.

Embarrassment apart, it was already no secret that Egypt wanted to stop the largest hydroelectric project in Africa. When Ethiopia completes construction of the dam in 2017, it will stand 170 metres tall (550 feet) and 1.8km (1.1 miles) wide. Its reservoir will be able to hold more than the volume of the entire Blue Nile, the tributary on which it sits (see map). And it will produce 6,000 megawatts of electricity, more than double Ethiopia’s current measly output, which leaves three out of four people in the dark. 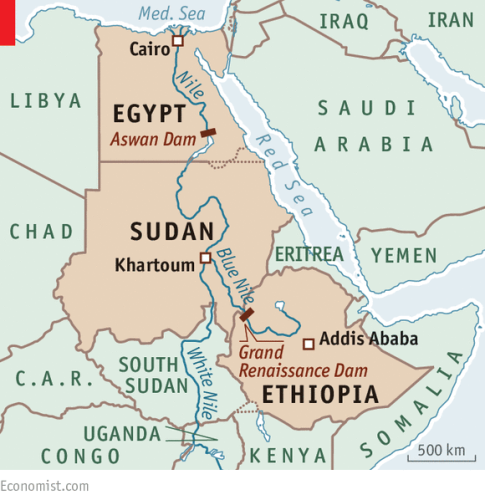 This boon for Ethiopia is the bane of Egypt, which for millennia has seen the Nile as a lifeline snaking across its vast desert. The river still provides nearly all of Egypt’s water. Egypt claims two-thirds of that flow based on a treaty it signed with Sudan in 1959. But even that is no longer enough to satisfy the growing population and sustain thirsty crops. Annual water supply per person has fallen by well over half since 1970. The UN warns of a looming crisis. Officials in Egypt, while loth to fix leaky pipes, moan that the dam will leave them high and dry.

Herodotus, an ancient Greek historian, called the fertile land of Egypt the Nile’s gift. Countless Egyptian leaders have rattled their sabres in defence of the water supply. This has soured relations with the eight other countries that share the Nile basin. Most of them have agreed to co-operate with each other, dismissing another old treaty which, Egypt claims, gives it a veto over upstream projects.

Only recently has the Egyptian government adopted a more conciliatory tone. In March of last year Abdel-Fattah al-Sisi, who ousted Mr Morsi in a coup, joined Hailemariam Desalegn, Ethiopia’s prime minister, and Omar al-Bashir, Sudan’s president, to sign a declaration that tacitly blesses construction of the dam so long as there is no “significant harm” to downstream countries. The agreement was affirmed in December, when the three countries settled on two French firms to study the dam’s potential impact.

That step is long overdue. The impact studies were meant to be completed last year, but bickering over the division of labour, and the withdrawal of one firm, caused delays. Many Egyptians believe that Ethiopia is stalling so that the dam becomes a fait accompli. Already half-finished, experts worry that it may be too late to correct any problems. Representatives of the three countries are now meeting to discuss “technical” issues. The contracts for studying the dam are not yet signed.

A sense of mistrust hangs over the dam’s ultimate use. Ethiopia insists that it will produce only power and that the water pushing its turbines (less some evaporation during storage) will ultimately come out the other side. But Egypt fears it will also be used for irrigation, cutting downstream supply. Experts are sceptical. “It makes no technological or economic sense [for Ethiopia] to irrigate land with that water,” as it would involve pumping it back upstream, says Kenneth Strzepek of the Massachusetts Institute of Technology.

A more reasonable concern is over the dam’s large reservoir. If filled too quickly, it would for a time significantly reduce Egypt’s water supply and affect the electricity-generating capacity of its own Aswan Dam. But the Ethiopian government faces pressure to see a quick return on its investment. The project, which is mostly self-funded, costs $4.8 billion.

Some experts say filling the reservoir could take seven years. But “having a fixed time to fill it may not be the best way to do it, because there can be extremely dry years and extremely wet years,” says Kevin Wheeler of Oxford University. He recommends releasing a fixed amount of water from the dam each year, leaving the reservoir to fill at a pace set by nature.

A potential wild card in the negotiations is Sudan, which long sided with Egypt in opposition to the dam, some 20km from its border. But as the potential benefits to Sudan have become clear, it has backed Ethiopia.

Short on energy itself, Sudan will receive some of the power produced by the dam. By stabilising the Nile’s flow, it will also allow Sudan to prevent flooding, consume more water and increase agricultural output (once old farming methods are updated). Currently much of the country’s allocation of water under the 1959 treaty is actually consumed by Egyptians. To their chagrin, the river will no longer gush past their southern neighbours during monsoon season and end up in Lake Nasser, the huge reservoir behind the Aswan Dam.

How much water Sudan uses in the future, and other variables such as changes in rainfall and water quality, should determine how the dam is operated. That will require more co-operation and a willingness to compromise. Disagreement between Egypt and Sudan over such things as the definition of “significant harm” bodes ill. But all three countries will benefit if they work together, claims Mr Strzepek, citing the dam’s capacity to store water for use in drought years and its potential to produce cheap energy for export once transmission lines are built.

The Renaissance Dam is merely the latest test of countries’ willingness to share water. There may soon be more difficulties. Ethiopia plans to build other dams on the river, which could further affect downstream supply. Sudan has promised foreign investors an abundance of water for irrigation. If Egypt is made to feel at the mercy of its neighbours, it may not have finished rattling its sabre.