From Russia and the Ukraine, to Isis in Syria, there are many threats to global stability in 2016 – but what are the most fragile states in the world?

The states of Libya and Syria have descended the most over the last decade, posing some of the greatest threats to global peace. Meanwhile, the world’s most stable, sustainable countries are Scandinavian, according to the Fragile States Index. 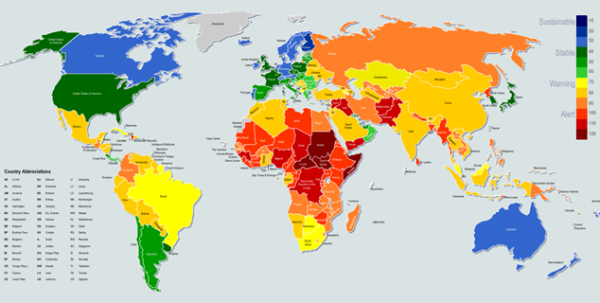 The list ranks countries based on several categories, including the state’s legitimacy, security apparatus, uneven development, economic decline and the number of refugees fleeing the country. According to the list, some of the largest falls in peace over recent years have been seen in the Middle East and North Africa.

Of the world’s 10 most fragile states, seven are in Africa and the other three are in the Middle East.

South Sudan, the world’s newest country, is its most fragile – having a “very high alert” on the Index. It is suffering from a combination of internal conflict, fractious politics and poverty, according to the Fund for Peace report.

Somalia, Central African Republic and Sudan also have this highest level of alert, and 12 other countries are issued with a high alert on the list. On the other hand, European countries are among the most stable in the world, according to the Index – with Finland, Sweden and Norway topping the list.

According to the report, “social equality, high female workface participation, robust functioning democratic institutions and press freedom are just a few more commonalities which have helped the Nordic four [countries] remain some of the least fragile countries”. Finland is the only country on the Index to be described as “very sustainable”, while 14 others are categorised as sustainable.

“In the past decade, there has been an overall improvement worldwide” Fund for Peace report

Finland is the only country on the Index to be described as “very sustainable”, while 14 others are categorised as sustainable. Over the last decade, the biggest falls in state fragility were seen in Cuba, Indonesia and the Dominican Republic. Cuba has enjoyed economic progress over the last decade under Castro, as well as a thawing of its relationship with America.

Libya, Syria and Mali have seen their states decline the most since 2006. Libya has seen Isil encroach into its territory after the country descended into chaos after the ousting of Colonel Gaddafi.

The report said: “Reflective of the spiraling insecurity in the post Arab Spring world, marred by complex local ethnic and social-economic tensions overlaid with sectarian Sunni and Shia divides and regional power plays, Libya, Syria, Yemen and Iraq all made the top ten in the Most Worsened for 2015.

“Though each has its own conflict dynamics, political fragmentation and humanitarian crises, the deepening fragility across the four states over the past year is reshaping the whole regional landscape.”

“This continues a long-standing trend in the Index where generally more countries improve year-on-year than they do worsen. In the past decade, there has been an overall improvement worldwide, where roughly the same ratio of countries are better off today than they were ten years ago.”