First you need to start with the grand narrative that is constantly quoted to you condescendingly: Your 30% participation in Eritrean’s prolonged armed struggle. This is based on faulty math; it is based on the simplistic calculation of the female headcount divided by the total membership and then converted to a percentage. It does not account for the triple work you have performed during that bitter and hostile struggle. Your performance was stellar, you humanized Ghedli, you emancipated some of its men, and you made indelible contributions to its continuity. So start rejecting that number. It is based on a faulty calculation that does not capture your true lynchpin status. 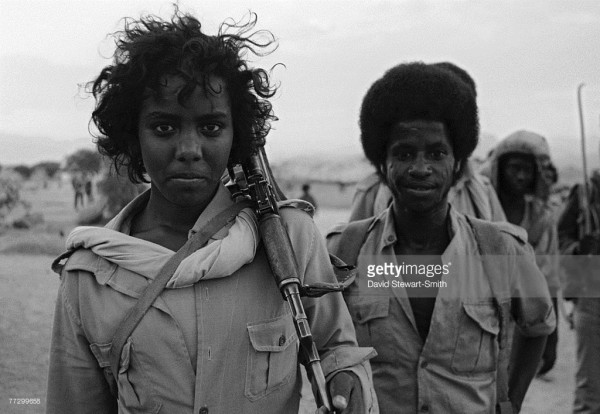 After you destroy the above fallacy, think about how you faired after the so-called independence; you have been at the receiving end of PFDJ’s abusive policies, from snatching your under-age children to paying financial penalties after your adult children decide to leave PFDJ of their own volition to escape the servitude of the national service that has become is as long as the armed struggle.  In a normal world, it is you, the Eritrean woman, who should have sued to demanded compensation for the kidnap and disappearance of your children by PFDJ. Although the story of Eritrea is your story, it has been unkind to you and to your offspring and just because you have paid dearly to beautify that story, you should not be beholden to its ugly parts, therefore tell you stories, document your braveries, your struggles now and then, and tell it like it is, narrate it like it was.

There are two parts that are stumbling blocks to your true emancipation: the institutional part that pays lip service and exploits your trust and patience, kindness and generosity and the cultural side that favors men. Through your struggles for the last fifty years, you have made a dent on some cultural aspects and, to your credit, you have emancipated many an Eritrean man but you have not emancipated yourselves yet from both the cultural and institutional harness. You work is cut for you and if you channel the energy, ingenuity and tenacity you have expended for the last fifty years, there is no task that you cannot accomplish, no hurdle you can diminish and no challenge you cannot turn to an opportunity.  You have been burdened by two challenges so far, liberating Eritrea and emancipating yourselves and so you have been spread thin; now it is high time for you to focus on the emancipation of Eritrean woman. You have the talent, the zeal and the consummate tenacity that is needed.

Someone in the Awate forum said that the Eritrean woman is unique. I agree. You are the standard- bearer of Eritrean culture, of Eritrean nature, of Eritrean continuity and of Eritrean tenacity and, as such, the bright posterity of the nation and the people rests on you. No one can free you from these responsibilities and living up to these responsibilities is intricately woven into your emancipation. From the way you nurture your children in the homeland and diaspora, to how you pass on your complex tapestry of legacy, to how your name your kids, all have bearings on your ultimate and genuine emancipation.

Activist and freedom fighter Tzigereda Haile has written an intellectually honest, ground-breaking article (http://awate.com/mistir-leyti-secret-of-the-night/) about the challenges that women faced during our Ghedli; and, Aklilu Zere (http://awate.com/the-good-tegadalit/) has eloquently told us how the good Eritrean freedom fighter fought with dignity and resilience, with passion and compassion. Both articles have one thing in common: the Eritrean woman has contributed more than her fair share during the liberation movement. She fought to liberate the land, the people and herself and that, most of the time, the institution of Ghedli was unfair to her.

Take your husband, boyfriend, brother, father, and cousin to Women Studies courses or seminars, if you can. An informed man will make an informed society and community. If you are a Christian and you have a Biblically literate husband who tells you that, “the husband is the head of the wife as Christ is also the head of the church”, just reply yes sir! And when you see the glint in his eyes, since soul mates finish each other’s sentences, finish the verse for him, “….as Christ loves the church, husbands love your wives” and when he says, “of course”, hit him with, “you know love entails death”. Before he recovers from that, since he invoked St. Paul, remind him that that St. Paul also said that Adam was not deceived, meaning Adam willingly, knowingly and lovingly decided to join Eve in her predicament, otherwise, the man who walked with God, could have told his wife that he would pray for her. It was Adam’s love that made him die with her than Eve dying alone and that is why Adam is called the shadow of Christ, so darling, love entails death.

Along with the fallacy of the 30%, there is one thing that you are constantly reminded of and it is this:  that Eritrean women are equal to men. Please get it, this is a lie, repeated many times over that we all started believing it. It is false.  You are not equal to men. Eritrean women are superior to Eritrean men. I hope this does not come across as condescending but I believe it with every fiber of my being. You have proved to be more flexible, more resilient, more tolerant, and more adaptive than the Eritrean man. Ghedli did not emancipate you, you emancipated it, you empowered it, you ensured its continuity, and you inspired and emancipated some of its men, but the perpetrators of the sleepless nights that Tzigereda Haile narrated are still lurking among you, some are unrepentant rapists, many are unapologetic human traffickers, so be mindful, carry the torch and keep emancipating the invariably belligerent Eritrean man. Also, you need to watch with the corner of your eyes the Jezebels amongst you, who are worshiping and dallying with the Devil reigning the land you have liberated with your toil, sweat, and blood.

Before I interrupt my daydreaming, where is the museum that documents the struggles, the lives, sacrifices, and transformations of Eritrean women? A year or so ago, the Awate forum was gripped by a heated debate about the role of the woman in empowering PFDJ and, sensing the importance of the subject, the website moderators harvested the comments. My recollection is hazy about the comments, but the picture accompanying the harvested comments is still haunting me. It depicted a group of weary women carrying water on their backs. Now, ladies, the good ladies, where is the museum that enshrines and preserves, the struggles, sacrifices, bravery, and transformations of the Eritrean women? If rejecting the fallacy of the 30% is the beginning, creating museum comes second. Go for it.