Can the world’s hand-picked prime minister for Libya survive long enough to put the country back together? 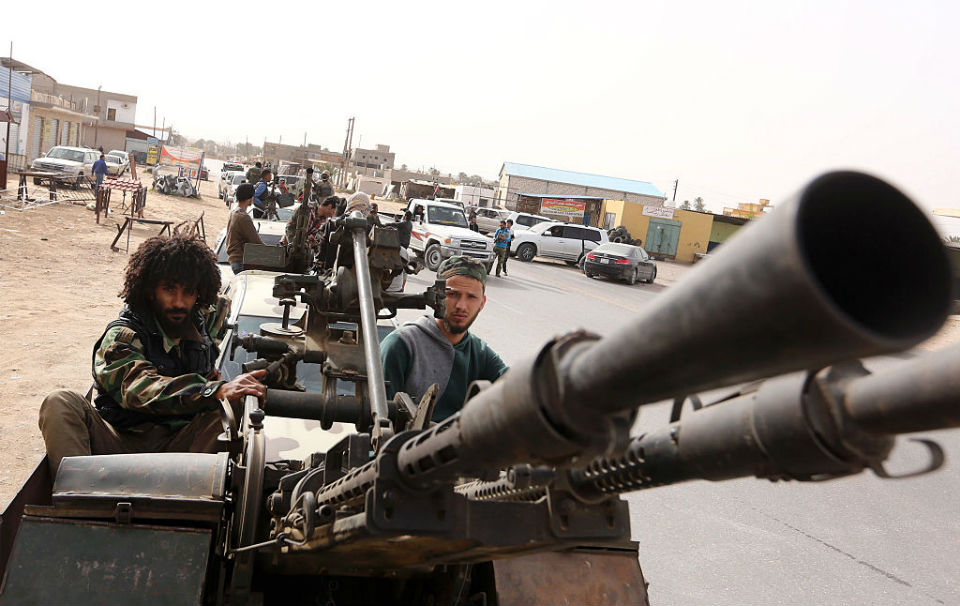 TRIPOLI, Libya — It was an absurd entrance, befitting the chaos of Libya’s civil war. The man the world hoped would unite the country, having been blocked from Tripoli at every turn by hostile militias, gallantly sailed into the capital on a small boat called the Sadada. Once there, he set up shop in a heavily guarded naval base and staked his claim to the throne.

Faiez Serraj, a former engineer and little-known parliamentarian, is the United Nations’ chosen prime minister for Libya. After his dramatic entrance to the capital on March 30, he now faces a daunting task: unite a country cannibalized by armed ex-rebel groups and then defeat the Islamic State.

What he has in his favor is the backing of the West, which has watched with alarm over the past year-and-a-half as the country fractured, with rival governments setting themselves up in the east and west, and the Islamic State establishing a foothold here on the doorstep of Europe. U.S. and European leaders pushed hard for the rival factions to settle their differences, resulting in a December peace deal authored by the U.N. and signed in Skhirat, Morocco.

The agreement established the Government of National Accord (GNA), which is supposed to serve as a unity government. Serraj — who had kept his head down during the tumultuous years after Muammar al-Qaddafi’s fall — was such an uncontroversial choice to head the body that even the most zealous opponents of the deal couldn’t muster up the venom to really hate him.

Which is not to say he had the respect, or allegiance, of all the country’s power brokers.

Until last week, Serraj largely had been dismissed inside Libya as just another pretender

Until last week, Serraj largely had been dismissed inside Libya as just another pretender, trying to advance his claim on leadership by charming foreign powers from his effective exile in Tunisia. He had not secured the formal backing of either warring government — one based in Tripoli, the other in the eastern city of Tobruk — as fierce opposition from hard-liners on both sides divided each institution. And he faced what seemed to be insurmountable resistance from armed groups within Libya Dawn, the armed political coalition that holds Tripoli.

When Serraj promised on March 17 to enter the capital “within days,” weary Tripoli residents dismissed his pledge with a bemused shrug, as Libya Dawn-affiliated militias did their best to undermine it. For days, fighters led by hard-line militia commander Salah Badi shot antiaircraft ammunition at the sky in a seemly desperate bid to stop incoming planes. The airport could only stay open intermittently, and even the U.N. envoy to Libya, Martin Kobler, was barred from landing.

“There will be bloodshed if he comes here,” Ahmed el-Hafir, deputy prime minister of Libya Dawn’s Tripoli-based government, promised nervously, referring to Serraj. Armed brigades would stop the “invasion,” he warned.

At the same time, it was clear there were growing fractures within the political and armed wings of the Libya Dawn alliance. For months, rival brigades from the cities of Tripoli and Misrata had been fighting each other over petty personal disputes. Then, just a week before Serraj’s return, several employees of the Foreign Ministry of Libya Dawn’s government defied their minister, Aly Abuzaakouk, by publicly siding with theU.N.-backed unity government. But the biggest blow came from the powerful, Libya Dawn-affiliated municipal council of Misrata, which gathered local lawmakers and at least 60 of the town’s brigades to release a statement that pledged allegiance to the unity government and vowed to secure Serraj’s arrival by forming a temporary security committee.

Meanwhile, several Libya Dawn-affiliated armed factions in Tripoli — including the Special Deterrence Force, a kind of police force led by powerful Salafi commander Abdel Raouf Kara — privately told Foreign Policy they would protect Serraj when he came. Ministers in the Libya Dawn government, feeling the strain, began using words like “militia,” increasingly an insult among Libyans desperate for political order, to describe groups that had once been their allies but were clearly leaning toward the U.N. body.

Tensions had already been high in Tripoli, a city with a severe shortage in hard currency and infrastructure badly in need of repair. But the anticipation of Serraj’s return put the city even more on edge. The capital began to echo constantly with the metallic rattle of heavy gunfire and dull thud of shelling. Armed brigades nervously prowled the intersections and roundabouts of neighborhoods soon deserted by residents. Anxious brigade members sent Viber messages to friends asking if it was true Serraj had arrived. In the streets, rumors about which plane he was on spread like lightning.

“The feeling is everyone wants him, is waiting for him, to come,” said Omar, one resident of the capital.

“Tripoli citizens are largely backing the unity government, despite the authorities insisting this is a ‘coup’.”

“Tripoli citizens are largely backing the unity government, despite the authorities insisting this is a ‘coup.’”

Following Serraj’s unorthodox arrival in Tripoli, the tensions within Libya Dawn burst out into the open. The very security forces that had secured Tripoli since the coalition’s takeover flipped sides and backed the newly arrived leader. Officials in Libya Dawn’s government, meanwhile, disappeared. On April 5, Tripoli authorities finally admitted that they no longer had “executive power” over Libya and were “no longer responsible … for what could happen in the future.” (Self-styled Prime Minister Khalifa al-Ghwell, who had led the charge against Serraj, has nevertheless refused to give up. Despite the apparent lack of a government or any tangible support, on April 6, he declared he was still prime minister.)

The power vacuum has given the new U.N.-recognized national unity government an unexpected opportunity to assert its authority over the capital.

“Ministers from the [rival] administration already contacted us showing support,” said Taher el-Sonni, Serraj’s right-hand man and advisor. “We have control of the state institutions … as well as the backing of the international community.” Our opponents, he added, “understand the game is over.”

But is it? Serraj still faces a daunting array of challenges: He must rebuild Libya’s fractured institutions, tame power-hungry militias, win support from partisans of the government in the east, and — last but not least — crush the Islamic State’s nascent “caliphate” in the city of Sirte.

The ragtag forces facing the Islamic State currently find themselves outgunned by the jihadis. On the front lines outside Sirte, poorly equipped soldiers wearing mismatching fatigues, who were once loyal to the authorities in Tripoli, described facing sophisticated sniper rifles and a relentless campaign of suicide bombers armed with Soviet-era Kalashnikovs.

“Without proper weapons, we’re basically sitting ducks,” one of the fighters quietly admitted.

European and U.S. officials hope Serraj’s new government will provide them with a partner to work with in the fight against the Islamic State. If it becomes a functional government, the United Nations could lift its five-year arms embargo on the country, potentially allowing a fresh flow of weapons and equipment to those fighting the Islamic State. The United States, Britain, France, and Italy also hope that Serraj’s government will green light foreign boots on the ground, to provide financial support, security training, and logistical assistance to local soldiers fighting the jihadi group.

If Serraj hopes to gain such support, first he has to win over the internationally recognized parliament in the eastern city of Tobruk. But the most recent vote there ended in fisticuffs as hard-liners, fearing a transfer of power, shut the doors on lawmakers trying to vote. And so questions of legitimacy continue to plague Serraj’s would-be government, fueling the skepticism of its opponents, both in western and eastern Libya.

“It is just a government that has been merrily chosen by individuals,” said Libya Dawn’s Hafir, calling its establishment a “coup d’état.”

“It’s a violation of the sovereignty of Libya and a theater of the absurd. It’s a project we didn’t sign up for,” added Abuzaakouk, the Tripoli-based foreign minister.

And, for the time being, Libya Dawn’s sworn foes in the east agree.

Prime Minister Abdullah al-Thani, who is based in the eastern city of Bayda, still refuses to hand power over to the unity government, claiming it has no legitimate claim to sovereignty because it failed to gain the endorsement of the parliament in Tobruk. His cabinet issued a statement on Saturday saying that if any of the country’s ports were reopened, oil should only be exported with the approval of the oil authority under its control.

Meanwhile, Serraj’s new allies among the Tripoli militias, which were once his main obstacle to entering the capital, are now jeopardizing his bid for broad-based support across the country. Although the unity government maintained it did not operate “under the protection of militias,” and had army and police in its temporary security committee, it was clear that some of the city’s most notorious armed factions were involved in the takeover.

“Armed groups are already negotiating amongst themselves who gets the unofficial security contracts for different ministries,” said an analyst in Tripoli, who asked not to be named for security reasons. “They are talking about distributing different portfolios.… ‘You get the culture ministry. You get the health ministry.’”

Leaders in the east fear that Serraj will simply supplant Libya Dawn, falling under the thrall of the same militias that previously dominated the capital. Aguila Saleh, president of the eastern parliament, hinted at such concerns when he said on Saturday that statements by Serraj’s Presidential Council “suggest they are not comfortable with the military.”

“We will not allow the unity government to be under the control of militias in Tripoli,” he said.

“We will not allow the unity government to be under the control of militias in Tripoli,” he said.

The establishment of the unity government in Tripoli, meanwhile, has been met with silence by Gen. Khalifa Haftar, the east’s top military leader and a critic of the U.N. peace deal.

“It’s not that he is not supporting [the new unity government]. He is silent about the situation,” Sonni, Serraj’s advisor, said carefully.

If the new would-be leaders in Tripoli manage to win over Haftar, they won’t just be gaining military heft — they’ll be bolstering their political legitimacy in the eyes of many Libyans.

Serraj, however, has made some progress in bringing the country’s divided institutions under his control. The Libyan Central Bank and National Oil Corporation, which manages all oil revenue, were split in two between east and west; both institutions have now pledged to back Serraj. And Ibrahim al-Jathran, a leader of the Petroleum Facilities Guard, promised to reopen oil ports that his forces had previously blockaded in protest. That means cash-strapped Libya could soon finally see a desperately needed increase in oil production.

Serraj can also count on aid from his friends in the international community. Kobler, the U.N. envoy, who was barred from landing in Tripoli just two weeks ago, flew into the capital on Tuesday and said the U.N. was offering Serraj “all the support needed.”

For the civilians caught in the crossfire of the long civil war, these developments have presented a glimmer of hope. The fighting in Tripoli largely seems to have stopped, and at night the streets of the capital are packed with people and families sitting in cafes. On Friday, for the first time since August 2014, hundreds of Libyans in Tripoli chanted in support of Serraj and against the Libya Dawn-supported government, chanting “bye-bye.”

Serraj, who attended Friday prayers and visited parts of the city, got a hero’s welcome.

“We honestly didn’t think it was possible, but everything seems to be falling into place,” said Ali, 35, from Tripoli, who said he had lost many friends since the 2011 revolution. “It’s been years of promises and conflict from all sides. Just last week, it felt like we were all talking in secret for this to happen. But now we just need to see change.”