Whether or not people feel unsafe over a modest piece of clothing is besides the point. They should have no right to impose their prejudice on others 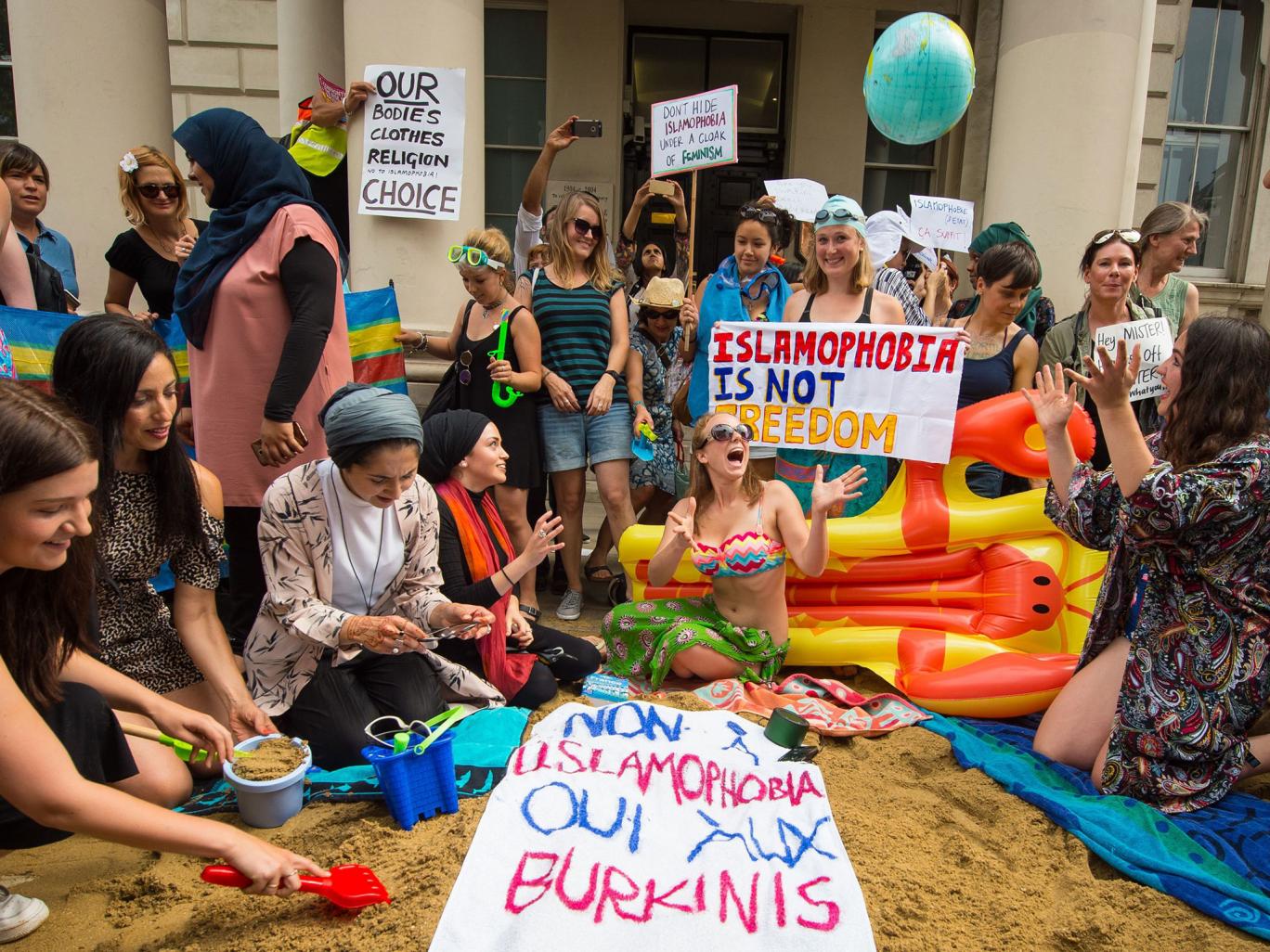 Demonstrators stage a beach party outside the French Embassy, in Knightsbridge, London, in protest against burkini bans PA

Despite angry crowds, François Hollande defiantly declared: “We’ve seen the protests, and I would say that in France all beliefs are respected. …. in particular freedom of expression.” That wasn’t a response to the ‘Wear What You Want’ beach party outside the French Embassy today; it was the President last year after protests against Charlie Hebdo.

If there was any doubt that French belief in freedom of expression is wholly one-sided, it has surely vanished now. After being banned in Cannes – where no women were found wearing one – the “burkini” ban has now spread to 15 towns and cities across France.

And how’s this for more freedom: the deputy Mayor of Nice has threatened to sue social media users who share photos of burkini fines, saying they “provoke defamatory remarks”. What’s next, prosecuting the photographers who took the pictures of women being forced to undress by police?

French politicians are in favour of provocation and free speech, it seems, until Muslims exercise those freedoms. When many of us defended Charlie Hebdo’s provocative cartoons last year, we didn’t realise we would be betrayed so quickly. If Muslims are being offended and provoked by cartoonists or satirists, commentators are quick to say they must get used to it. Fair enough. But when will the French public get used to being offended too?

A French magazine reported earlier this week that a former flight attendant from Tolouse, relaxing on the beach in Cannes, was abruptly asked by the police to remove her headscarf. She wasn’t wearing a full burkini, just a headscarf. She refused. Egged on by the continuing spectacle some onlookers told her to “go home”, even though her family had been in France for three generations.

The burkini wasn’t even intended to provoke; it was created by an Australian woman to “make sure we blended in with the Australian lifestyle”. She wanted to encourage women who wore more modest clothes to enjoy themselves at the beach. I can fully imagine many older Asian women, non-Muslims, opting for the same garment out of an ingrained sense of modesty. Should they be banned from the beach too? Who does this ban serve?

France cannot be in favour of free expression when it offends Muslims, but whine about provocation when Muslims choose to be different. This is astonishingly hypocritical. It is even more so given the debates on free speech we had just last year.

It’s the duty to French politicians to stand firm by their self-professed principles, not ditch them in the face of a populist mob. The Deputy Mayor of Nice told the BBC’s World at One today: “When you see a burkini on the beach, people feel unsafe”. Whether or not people feel unsafe over a slightly modest piece of clothing is besides the point – they should have no right to impose their prejudices on others.

Even more so, the bans are a boon to Islamists who say the French state has one rule for Muslims and another for the rest. That it is discriminatory. That only an Islamic caliphate can offer them true freedom. That the west’s veneer of tolerance and freedom is slipping away. Are they right?

We assert our principles for a reason: to serve as the basis for comparing different groups in the same situation. So we can be fair and transparent and be judged on how we uphold them. By abandoning its belief in freedom of expression so easily, France is showing how little it believed in them in the first place.