Gabon voted on Saturday amid discontent over its failure to raise living standards despite oil wealth, in a poll posing the biggest challenge yet to President Ali Bongo, whose family has run the central African nation for half a century.

With state machinery and entrenched patronage networks behind him, Bongo, 57, is likely to be returned, seven years after winning his first election following the death of his father Omar, who ruled for 42 years. 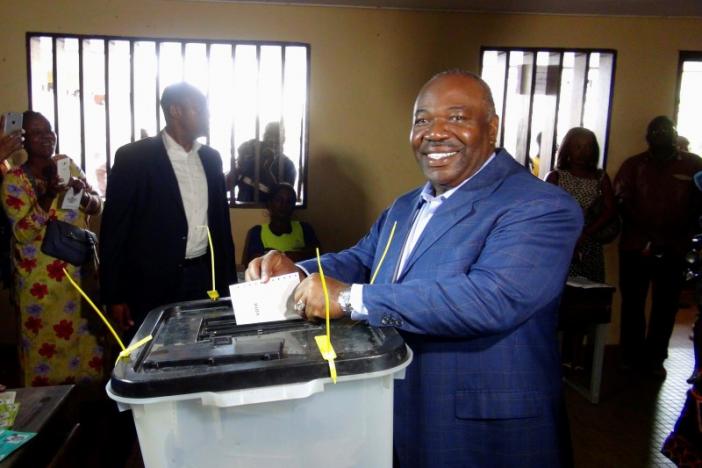 Polls closed at 7 p.m. (2.00 p.m ET), an hour late to allow people were still waiting to vote to do so. Voting was mostly calm, although witnesses said a few scuffles broke out in one area as tempers flared in long queues to cast ballots.

Results are not expected until Monday or Tuesday, although partial results may start trickling out on Sunday. Land and sea borders were shut on Saturday until 8 p.m. (1900 GMT).

Bongo faced nine other candidates – compared with 22 in the last poll – but his main rival was veteran diplomat Jean Ping.

“The day of glory has arrived and we are preparing as you can see to celebrate victory,” Ping, 73, said shortly after voting in Martine Oulabou school, in the capital Libreville.

Ping faces an uphill struggle, not least because Gabon’s one-round system means the winner doesn’t need a majority, just more votes than any other candidate.

“I have laid out the change achieved and the change to come in the future. For that reason, I’m confident,” Bongo, wearing a blue suit, said after voting.

Bongo has made saving Gabon’s unique wildlife, including pristine equatorial rainforest and elephants, a priority, but voters complain they have more pressing worries.

Ping meanwhile has harnessed discontent over the lack of a significant rise in living standards in the population of just under two million, despite its oil riches.

“The Gabonese are suffering. We are not well paid, our children don’t live in good conditions. That’s why I voted for change,” Marie Ange N’no, 40, a civil servant, said outside a polling station in Libreville.

She declined to say for whom she had voted.

Gabon has just rejoined OPEC after two decades and has a GDP per capita of $10,000 a year, making it one of Africa’s richest countries, yet much of that wealth is concentrated in the hands of the elite.

About a fifth of Gabonese live on less than $2 a day and nearly a third live below its own national poverty line, according to the latest available data, from 2005.

Bongo on Thursday promised “a merciless fight against poverty”.

But Gabon faces a financial squeeze owing to a long-term decline in oil output — which shrunk GDP per capita by nearly a fifth between 1980 and 2014, according to the United Nations Development Program — and a sharp fall in the price of crude over the past two years. Efforts to diversify into agriculture and tourism have yet to bear much fruit.

Oil wealth has flowed mostly to the elite – for a period Gabon was the world’s top per capita importer of champagne – and has trickled down slightly only via its bloated civil service.

During his father’s rule, Gabon was a pillar of “La Francafrique”, an intricate, shadowy web of diplomacy, commerce and French military might that kept African autocrats in power and gave French companies privileged access to them.

Bongo has tried to shake off this legacy by presenting a modern face with a development program run by technocrats.

“As (Omar Bongo’s) son, it is difficult to present yourself as something new and technocratic when the whiff of corruption hangs over from the last administration,” said Anthony Goldman, head of West Africa-focused PM Consulting.

The mixed-race son of a wealthy Chinese trader, Ping is a former foreign minister and African Union Commission chairman who was once close to Omar Bongo and even had a relationship with his daughter, Pascaline, fathering two children by her.

That limits how much leverage he can get out of dissatisfaction with the Bongo family. Ping fell out with “Bongo Junior”, as Gabonese call the president, leaving the ruling party in 2014 to become an outspoken critic.

Opposition campaigners have questioned whether Bongo is really Gabonese or an adopted child from eastern Nigeria, something he denies. Tensions between the two camps could yet boil over into unrest.