President Abdel-Fattah El-Sisi gave an interview to state-owned newspapers about different regional issues, including relations with the US, Turkey, and developments related to the Grand Ethiopian Renaissance Dam

In a long interview with Egypt’s three major publicly owned newspapers published on Monday, President Abdel-Fattah El-Sisi announced that he is going to participate in the upcoming G20 summit in China in early September.

“I am looking forward to meeting with many of the world leaders there,” El-Sisi said in the first part of the interview published in Al-Ahram, Al-Akhbar, and Al-Gomhouria. 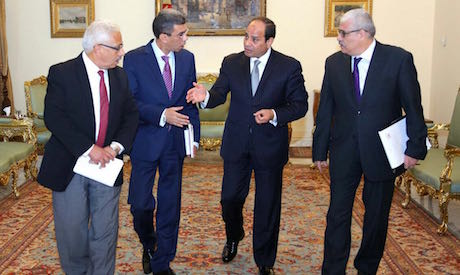 “Egypt is keen to deliver the voice of Africa at the upcoming G20 summit,” he said.

The Egyptian president also revealed that he will participate in the upcoming session of the United Nations General Assembly in New York, also in September.

“I am going to participating in the General Assembly to reaffirm the Egyptian vision to fight terrorism and radicalism,” he said.

In a seven-hour interview on Sunday with the editors of the three dailies, El-Sisi discussed a range of domestic and international issues.

The first part of the interview, published on Monday tackled Egypt’s relations with the world as well regional developments in the Middle East for three hours.

The second part of the interview, to be published on Tuesday, will deal with domestic issues.

El-Sisi said that he was “optimistic” about the return of Russian tourists to Egypt.

Russian tourism to Egypt was halted last year, after a Russian airliner crashed in Sinai killing all on board, mostly Russian holidaymakers.
Following the crash Moscow suspended all flights to Egyptian airports. A number of European countries suspended flights to Sharm El-Sheikh, the airport from which the airliner had taken off.

“I totally understand the concerns of the Russian leadership towards its citizens after the incident of the airliner,” President El-Sisi said, adding that the crash did not negatively affect Egyptian-Russian relations.

The Russian investigative committee has officially classified the plane crash as a terrorist attack, after an Islamic State militant group affiliate in North Sinai claimed responsibility for bringing down the airliner with a bomb.

Egypt’s domestic investigation committee has yet to release any findings on the cause of the crash.

The drop in tourists from Russia, one of the main sources for foreign visitors to Egypt, has had a major impact on the local tourist indusry, as have the reduction in tourists from other countries. The knock-on effect for Egypt’s economy has also been significant, as tourism is one of the major sources of foreign curency.

El-Sisi also announced in the interview that the final agreement between Egypt and Russia to build the El-Dabaa nuclear power plant will be signed this year.

On developments related to the peace process in the Middle East, El-Sisi said that Egypt supports all ongoing efforts that seek to resolve an “extremely complicated issue.”

He explained that Egypt’s relationships with both the Palestinian and Israeli sides allow Egypt to play a pivotal role in finding a solution.

In July, Egypt’s Foreign Minister Sameh Shoukry reiterated –during the first visit by an Egyptian foreign minister to Tel Aviv since 200– to Israeli Prime Minister Benjamin Netanyahu that Egypt is a “steadfast and unwavering” supporter of the two-state solution to the Israeli-Palestinian conflict.

El-Sisi said the efforts status on reaching a solution were in “still water” and efforts should be exerted to move the process forward on the condition that all will is available, whether from the Palestinian or the Israeli side, or from the international community.

The president also said it was necessary to finalise the national reconciliation between the Palestinian authority and the Hamas movement so “there would be a real effort to found a Palestinian state.”

El-Sisi stated that Egypt doesn’t aim for an exclusive role in resolving the Palestinian crisis as much as it wants to push the idea for to others that peace is a “glaring right” that could change the region if accomplished.

The president also revealed for the first time that Russian President Vladimir Putin was ready to host direct peace talks between the Palestinian President Mahmoud Abbas and Netanyahu in Moscow.

El-Sisi said he was thankful for the “positive statements” from Italian Prime Minister Matteo Renzi regarding the Giulio Regini murder investigation.

“The Italians feel that we cooperate with them in order to find out the truth,” said El-Sisi repeating that he sympathised with the family of the Italian student.

Regeni, who was in Cairo conducting research on independent trade unions, went missing on 25 January. His body was found nine days later in by the roadside on the outskirts of the captial, bearing signs of severe torture.

El-Sisi also said that he believed that public diplomacy delegations from Egypt had helped in clarifying the image in Italy.

“Still, let me tell you that the way some media outlets in Egypt dealt with that case complicated the matter,” he said without explaining further.

This is not the first time El-Sisi has criticised some Egyptian media outlets for their take on the PhD student’s murder.

In April, El-Sisi blamed “evil” people in Egypt for “lie- and allegation-mongering” about the case and embarrasing Egypt internationally.

Egypt and the US

In March 2015, the Obama administration resumed US military aid following a suspension of aid in October 2013 over Egypt’s crackdown on the now banned Muslim Brotherhood group following the ousting of president Mohamed Morsi and violent attacks by Islamists against security forces

The resumption of US aid to Cairo came despite continuing criticism of Egypt’s human rights record by local and international rights watchdogs.

In May, Egypt also received an initial shipment of mine resistant ambush protected (MRAP) vehicles from the United States at no-cost, to help Egyptian security forces with their war against Islamist militants in North Sinai governorate.

Hundreds of Egyptian security personnel have been killed by bombs and shootings in northern Sinai.

“Egyptian-American relations are strategic and they have been improving,” said President El-Sisi, when asked about the future of the bilateral relationship.

“We both are interested in giving ourselves a chance to review our stances. During the past three years, facts about the situation in Egypt were clarified to them, and our policies are characterised with balance, prudence, and keenness on such relationships,” he said.

Regarding whether they are currently talks with the US presidential candidates or not, El-Sisi said there were talks with all the sectors of the US political scene including officials in the Congress, the US administration and the Pentagon.

El-Sisi said he believes that the US-Russian understanding as well as the flexibility of the regional powers involved in the Syrian conflict can find an end to the crisis in the war-torn country.

In his interview, the president summarised the Egyptian position regarding the Syrian crisis as respecting the unity of Syrian territory and the Syrian people’s will, finding a political solution to the crisis, disarming the militias and radical groups, and reactivating the role of state institutions.

“The terrorist groups are already moving from Syria and Iraq to Libya and there are international efforts to deal with that danger,” El-Sisi said in his interview.

Speaking about Libya, he said Egypt supported Libya’s national army as well its elected parliament because they represented the will of the Libyan people.

“We are already to confront any threat on our borders with Libya,” he said.

On Yemen, El-Sisi said that Egypt had no naval forces deployed in combat to any country in the region, adding that the Egyptian navy was only securing navigation in the Bab Al-Mandab strait and the passage of ships to the Suez Canal.

He added that the Egyptian air force was working with “our brothers in Saudi Arabia” in Yemen.

Egypt’s air force has been participating in the Saudi-led military coalition against Houthi rebels in Yemen since the coalition was launched in March 2015.

Relationship with the Gulf states

“Our relationship with the Gulf states is solid and strong and cannot be reduced to financial support only,” said El-Sisi.

Since the 2013 ouster of Mohamed Morsi, Saudi Arabia, the United Arab Emirates and Kuwait have provided Egypt with billions of dollars in aid.

El-Sisi also added that “Arab states need to deal with one another more positivity and to work on unity.”

The controversy over Tiran and Sanafir

The decision in April caused immediate controversy locally, with many public figures arguing the islands were in fact Egyptian territory.

At protests organised against the decision, dozens were arrested and stood trial mostly for breaking the Protest Law. Most have been released after found innocent or receiving heavy fines.

The Egyptian government has repeatedly said that the islands have always belonged to Saudi Arabia and that Egypt has merely been administering them on behalf of the Saudis since the 1950s.

El-Sisi said that he was dealing with the issue in complete respect for the state’s institutions and the independence of its judiciary and its verdicts.

Egypt’s State Lawsuits Authority – the body that represents the government in legal cases – appealed before the High Constitutional Court in June after an Egyptian administrative court voided the decision by the government to place the two islands under Saudi control.

The government has also been challenged by an appeal to the High Administrative Court, which would stop the execution of the verdict until the High Constitutional Court looks into the case. Both courts have yet to issue a ruling.

The maritime border demarcation agreement, signed during Saudi King Salman’s historical visit to Egypt in April, is yet to be presented to parliament.

El-Sisi stressed that parliament will have a chance to scrutinise the agreement.

El-Sisi also revealed that there would be another Egyptian-Cypriot-Greek summit in October to push forward cooperation between the three countries.

In the past two years, three-way summit meetings have been held in Athens, Cairo and Nicosia to establish maritime boundaries in the eastern Mediterranean, as well as cooperating in the fields of energy, tourism and agriculture.

“Redrawing the maritime boundaries give us a real opportunity to search for (marine wealth),” he said.

Regarding the troubled relationship with Turkey, El-Sisi said Egypt was giving “the Turks” time to correct their position.

“There is no enmity between the Egyptian people and Turkish people,” said El-Sisi, adding that the Egyptian government would not respond to statements of Turkish officials except in a way that represents “Egypt’s civilization, culture and values.”

The Ankara government has been a vocal opponent of the Egyptian regime following the ouster of former president Mohamed Morsi in the summer of 2013.

On Saturday, Turkish Prime Minister Binali Yildirm said during a briefing that Turkey wanted to repair ties with Egypt.

“We think we need to develop economic and cultural ties with Egypt as countries that use the two sides of the Mediterranean,” he said.

“Egypt has started a new era to develop its relations with African countries, especially Nile Basin countries,” said El-Sisi during the interview.

El-Sisi said that the negotiations on the technical studies into the impact of the under-construction Grand Ethiopian Renaissance Dam were progressing in a way that is “reassuring to all.”

“The Nile water will continue to flow to Egypt and to everyone else,” he said.

According to the Egyptian President, President Omar Al-Bashir of Sudan will visit in next October for a meeting of the Sudanese-Egyptian Higher Committee.