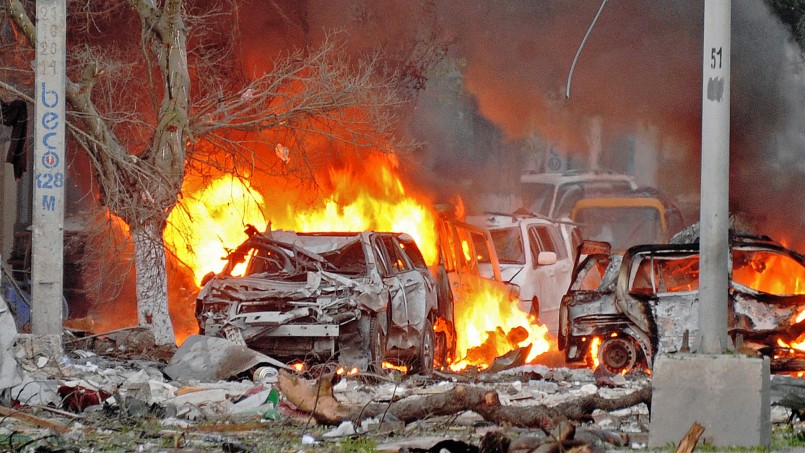 Somalia’s struggle with terrorism is but one symptom of the total collapse of a once-strong state. (MOHAMED ABDIWAHAB/AFP/Getty Images)

Somalia is often perceived as the quintessential failed state, perpetually ripped apart by internal conflict and competing clan structures, but this has not always been the case. Before its civil war, which has been raging for almost three decades, Somalia was, in fact, a strong regional actor. But the Somali state eventually fell victim to its own regional ambitions and to Cold War competition, leading to the disintegration of its institutions. Even now, as the country rebuilds basic governing structures and struggles to establish physical control over its territory, Somalia is far from self-sufficient in economic or security matters. The damage incurred during the collapsing reign of its longtime strongman, Maj. Gen. Mohamed Siad Barre, continues to undermine Somali stability, exposing significant deficiencies in the state that have yet to be repaired.

The Geographic Roots of Instability

The origins of Somalia’s state failure are rooted in the artificiality of its design, which left the ethnic Somali population riven by borders when the country took shape in the early years of the Cold War. The United Kingdom gave large portions of territory inhabited by ethnic Somalis to Ethiopia and Kenya in the wake of World War II as reward for their support for the Allies. The remaining British-controlled portions of the Somali homeland then became an independent state. The division of ethnic Somali lands was not solely responsible for the eventual failure of the Somali state, but it did lay the groundwork for a more turbulent future. In particular, it led to persistent competition with Ethiopia as Somalia continually sought to unite what is known as Greater Somalia under its rule. 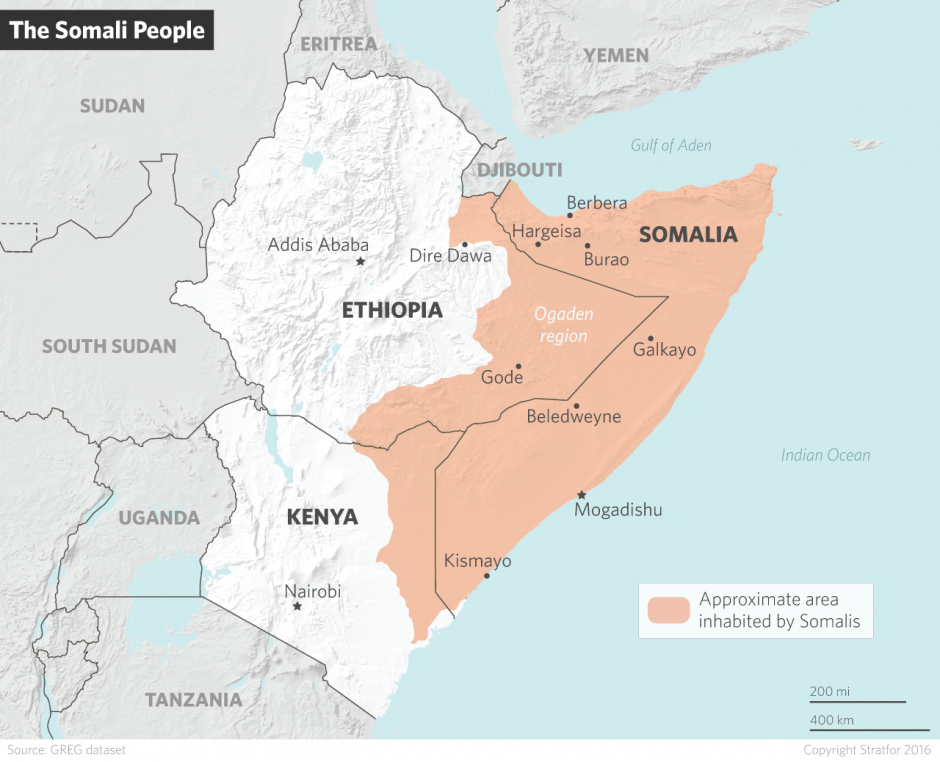 In the early 1960s, Ethiopia’s military overmatched its Somali counterpart. (In 1964, for example, Ethiopia’s air force quickly overwhelmed Somalia during a brief war over the Ogaden region — the largest ethnic Somali territory fully contained within Ethiopia’s borders.) This dynamic began to change, however, as the two countries got wrapped up in Cold War rivalries, which escalated their own competition and triggered substantive changes in the internal nature of both states.

After gaining independence in 1960, Somalia established what seemed to be a democratic foundation. The assassination of Prime Minister Omar Abdirashid Ali Sharmarke by one of his bodyguards in 1969, however, marked the opening of a bloodless coup that brought Barre to power. Ruling through a revolutionary council, Barre threw out the constitution and dissolved parliament, transforming Somalia from a young democracy to a military autocracy.

This cleared the way for a reversal of the balance of power with Ethiopia. Somalia had already been receiving some military support from the Soviet Union since shortly after its independence. After the 1969 coup, military aid from other Soviet-aligned countries increased dramatically — particularly from Egypt. Cairo has long sought to destabilize Ethiopia as a way to secure the resources of the Nile, presaging the current Egyptian-Ethiopian standoff over the Grand Ethiopian Renaissance Dam. By boosting the Somali military, Egypt advanced this strategy while also serving Soviet aims by weakening an ally of the United States. Emboldened by its newfound support, the Barre government resumed its attempts to unite Greater Somalia.

The overthrow of Ethiopian Emperor Haile Selassie in 1974 furthered Somalia’s regional ascendance. A communist military council known as the Dergue arose in Addis Ababa, but it was focused heavily on containing internal resistance. Barre seized the opportunity to funnel support to a number of rebel groups, including some hailing from the Ogaden region. Eventually, Somali forces even began joining rebel operations outright.

While Somalia made gains, the Dergue gradually strengthened its ties with the Soviet Union, convincing Moscow of its ideological purity and intent to establish a true Marxist-Leninist state. This presented the Soviet Union with the difficult task of backing both nominal allies, particularly after Barre ordered most of the Somali military to invade Ethiopia in July 1977.

At that point, Somalia had become the stronger military power with perhaps the most robust air capabilities in sub-Saharan Africa. With its larger fleet of Russian MiG-21 aircraft proving an immense challenge for Ethiopia’s more sophisticated but smaller fleet of U.S.-built F-5 fighter jets, the Somali offensive initially found success. Somali forces took control of at least 90 percent of the Ogaden region and began descending on the city of Dire Dawa, from which they could threaten to sever Ethiopia’s critical rail connection to the coast. The Somali dream of uniting Greater Somalia was closer than ever. But the Cold War dynamics that had boosted Somalia’s military clout soon turned against it.

After Barre rejected a Soviet offer to mediate, Moscow sided fully with Ethiopia. Anticipating a loss of access to Soviet weaponry and equipment, Barre initiated negotiations with the United States, Britain and France. But their eventual support paled in comparison to the commitment the Soviet Union showed to Ethiopia. Moscow sent advisers to the front lines and encouraged Cuba to deploy some 15,000 combat troops in support of Addis Ababa. The Soviet Union also increased its military aid and helped the Ethiopian military transition from U.S. arms to Warsaw Pact equipment. The introduction of the MiG-21 fighter aircraft was particularly pivotal, shifting the tide of the conflict in Ethiopia’s favor.

The Slow Destruction of the Somali State

By March 1978, the Somali military was forced to pull back across the border, effectively ending the war. The conflict had taken a massive toll on Somalia’s military capabilities and on the unity of the revolutionary council running the country. More than a third of the Somali army was lost, sowing discontent within military leadership circles, and senior officers began to plot against Barre. Meanwhile, the steep economic price of the fight — exacerbated by the loss of Soviet-backed infrastructure development and trade, along with a wave of inbound migration from the Ogaden region — turned public sentiment against the government. All told, the initial promise of the Somali state after independence had evaporated.

Under these conditions, the country was ripe for civil war. Opposition groups formed against Barre in the 1980s, several of which established armed wings. Barre’s attention turned to weakening potential threats to his rule, such as the Isaaq clan, one of Somalia’s four dominant clans that had been excluded from positions in Barre’s administration. The government sought to cut off sources of income for the Isaaq, including the profitable khat trade. This, along with Barre’s decision to settle Ogaden refugees on Isaaq land, eventually prompted the Isaaq-led Somali National Movement to rise up against him. In 1988, Barre ordered the bombardment of the three main cities inhabited by the Isaaq — Hargeisa, Berbera and Burao — with aircraft and artillery, sending shockwaves through Somalia and deepening the rifts that still plague the country today.

Barre fled Mogadishu in 1991, but he left behind a country divided among allegiances to various warlords. There were no institutions left to regain control and initiate the reconstruction of the Somali state, and conflict engulfed the country. This, in combination with a deep famine — partially influenced by regional droughts but exacerbated by the lack of any existing economy and infrastructure — led to a massive humanitarian crisis in the early 1990s. The Somali civil war evolved from a warlord- and clan-based conflict to a jihadist battleground, draining the country of human capital and preventing institutions from being rebuilt.

International efforts to stabilize the country and erect some semblance of a functional state are ongoing. For example, the United Nations is trying to shepherd Somalia through elections in hopes of paving the way for a new era of political maturity. The early years of the Somali state proved that Somalia can function under centralized governance, after all, even if heavy external support is required. Meanwhile, the African Union, the United States and Turkey, among others, are attempting to prepare the Somali military for the eventual departure of peacekeepers.

Despite these efforts, regional players such as Ethiopia and Kenya have only limited interest in seeing Somalia stabilize. Though they are happy to help stop the spread of Islamist violence emanating from within the country, a strong and independent Somali state would risk the revival of Mogadishu’s age-old ambition of uniting Greater Somalia. Moreover, the damage done to Somali society has been severe, and rebuilding modern institutions on a fractured foundation will continue to pose immense challenges.

To this day, Somali factions and interest groups vie for power, continually expanding and complicating the internal conflict beyond the fight against jihadist militants. In September, for instance, an intense battle erupted between troops loyal to the autonomous region of Galmudug and those of the autonomous region of Puntland for control over the city of Galkayo. Divisions run deep in Somalia, and it will take strong political institutions and a viable security infrastructure to channel them into political expression rather than violence.