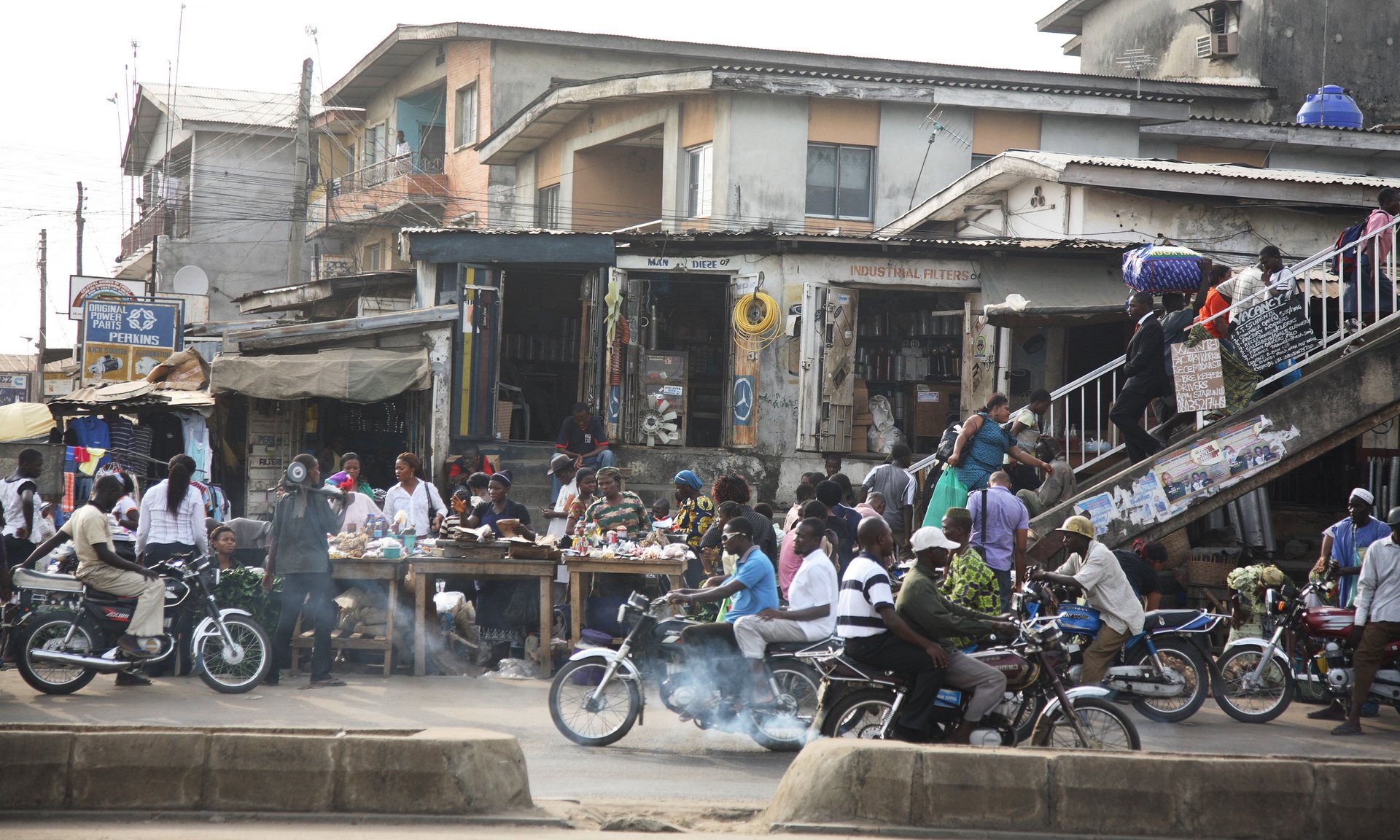 “Drive from one corner of Lagos to another, and in no time you will find surfaces lightly dusted. Under fingernails, thick grime settles.’ Photograph: Alamy

Dense, dirty air laced with grease best describes the atmosphere of most Lagos streets. Drive from one corner of this great west African city to another and in no time you will find surfaces lightly dusted, like a soft sprinkling of icing on cakes. Under the half moons of fingernails, thick grime settles.

It’s a scene taken as typically African: polluted, bedraggled, unhealthy. Yet this has only ever been made possible by the exploitation of Africa’s people – the bedrock of European development. Today the exploitation continues. This week five west African countries, Nigeria included, announced plans to end the practice of European oil companies and traders exporting “African quality” diesel.

“Dirty fuel” has earned the name because it is imported diesel with sulphur levels as high as 3,000 parts per million when the European maximum is 10ppm. To be clear, “African quality” fuel, is fuel not fit for European humans. Racism has always been about the sanctioning of exploitation. How else can one justify one nation siphoning the wealth of another thousands of miles away if not by believing “those people” are inferior and thus “deserving” of servitude?

For commodities traders Trafigura (which a year ago were able to pay 600 staff more than half a billion pounds in bonuses), and Vitol (whose chief executive is Conservative donor Ian Taylor), their defence is a simple one: there’s nothing illegal about the practice. Yet in 2013, nearly 20,000 people died from air pollution in Ghana alone. It takes a breathtaking level of moral bankruptcy to happily profit from an enterprise that kills thousands. We do well to remember that corporations are not intangible entities but are made up of people capable of ignoring the human costs of their bid for greater wealth.

This can’t be rationalised as something only the dispossessed of the world suffer – those “others” who aren’t “us”, but who are all the same clamouring to escape brutalising poverty, and who don’t understand that “we”, in Europe, are full. No: to the corporations happy to exploit us all, impoverished immigrant or impoverished northerner, it’s much of a muchness. We exist in solidarity as canon fodder in a clamour to increase capital. The fight is not with each other, but with the Goliaths of global capital.

“This is empire building wholly colonial in spirit. This is capitalism as we currently practice it”

Powerful corporations such as Google, Starbucks and Amazon, with their tax avoidance have taught us that for them, profit is king. It means responsibility to the communities that serve them are, at best, secondary concerns. Ones that always defer to the more pressing need of acquisition. This is empire building wholly colonial in spirit. This is capitalism as we currently practice it.

Built into our economic DNA is the notion that inequality is a necessary evil, that there is nothing to be done about it. Put another way, wealth creates poverty. Colonialism has, perhaps, best equipped those “others” from ex-colonies with an intimate understanding of what corporations, given free reign, will continue to do. Wealth will always be funneled upwards to make the rich more so while the rest are made poorer. This is how it was when corporations like the East India Company were able to avoid doing what was just by plundering another nation for the benefit of the few. It is how multinationals continue to behave.

Today, victims of corporate dispossession are global, although to some extent this has always been the case. Though the UK’s working class were themselves exploited, they were nevertheless protected from the many cruelties of conquest. The dynamics remain much the same, with global capital able to exploit the 99% wherever they are with exceptional mercilessness reserved for those living in the ex-colonial outposts.

The combined wealth of the UK’s richest 1% is more than 20 times the total of the poorest fifth. When work doesn’t pay, as more than 7 million UK families living in poverty intimately understand, you are simply a thing to be exploited. Workers at places like Sports Direct don’t require an explainer on precarity or job insecurity when it forms the fabric of their working lives.

Often we talk of “the markets”, companies made up of people capable of making different choices, as a supreme power. Much like the God of the Old Testament, they are in need of sacrificial burnt offerings in order to have mercy on us all. Yet markets that create working conditions – even in the UK – reminiscent of gulags, all for £6.70 an hour, don’t sound much like benevolent deities.

The poor have been paraded as social pariahs angered by extreme inequality whose righteous rage has brought Brexit upon us. Never mind that this is a lazy oversimplification of the facts. Or that gross inequality like ours can only continue if we create a constantly fluctuating vision of the other to rally against, together. Whatever our class backgrounds, it is after all, foundational to the national make up.

Things fall apart if, to quote Yeats, the centre cannot hold. Shared hate is nothing if not communal and therefore cohesive by nature. Sometimes it is the young, others, the very poor. For so long it has been immigrants: the Irish, “bogus” asylum seekers, eastern Europeans, south Asians or Caribbeans and Africans. Busily hating the other gives us no time to demand “equality in all our lives”. Powerful corporations like Trafigura and Vitol or Amazon and Google can do better. The fight is to make them see so.