On Saturday, his ruling Zanu-PF party endorsed the 92-year-old leader as its candidate for the 2018 presidential election, bringing him closer to achieving his wish. From crushing political dissent to ushering in disastrous land reforms that saw the economy crumble, many accuse Mugabe of turning the regional breadbasket into a food importer.

The leader who is currently Africa’s oldest president, having clung to office for 36 years, has shown no sign of loosening his grip. “His real obsession was not with personal wealth but with power,” said biographer Martin Meredith. 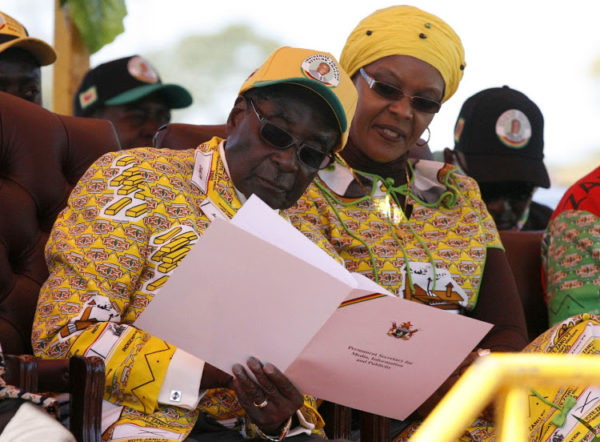 Zimbabwean President Robert Mugabe and his wife Grace attend an election rally of his ZANU-PF party in Marondera, about 70 km (43 miles) east of Harare July 15, 2013. Zimbabwe will hold presidential and parliamentary elections on July 31 and police chiefs have been campaigning for Mugabe, telling rank-and-file to vote for the veteran leader and his ZANU-PF party. REUTERS/Philimon Bulawayo (ZIMBABWE – Tags: POLITICS ELECTIONS)

He initially won international plaudits for his declared policy of racial reconciliation and for extending improved education and health services to the black majority. But his lustre faded quickly. Mugabe, whose party commands most of its support from the ethnic Shona majority, is tainted by the mass killing of the minority Ndebele people in a campaign in the early 1980s known as Gukurahundi, which killed an estimated 20,000 suspected dissidents.

The violence on the Ndebele was unleashed by his North Korean-trained Fifth Brigade. Yet it was the violent seizure of white-owned farms nearly two decades later that would complete Mugabe’s transformation from darling of the West into international pariah — even if his status as a liberation hero still resonates in most of Africa.

Aimed largely at placating angry war veterans who threatened to destabilise his rule, the land reform policy wrecked the crucial agricultural sector, caused foreign investors to flee and helped plunge the country into economic misery. At the same time, critics say, Mugabe has clung to power through repression of human rights and by rigging elections.

Born on February 21, 1924, into a Catholic family at Kutama Mission northwest of Harare, Robert Gabriel Mugabe was described as a loner, and a studious child known to carry a book even while tending cattle in the bush. After his carpenter father walked out on the family when he was 10, the young Mugabe concentrated on his studies, qualifying as a schoolteacher at the age of 17.

An intellectual who initially embraced Marxism, he enrolled at Fort Hare University in South Africa, meeting many of southern Africa’s future black nationalist leaders. After teaching in Ghana, where he was influenced by founder president Kwame Nkrumah, Mugabe returned to Rhodesia where he was detained for his nationalist activities in 1964 and spent the next 10 years in prison camps or jail.

During his incarceration he gained three degrees through correspondence, but the years in prison left their mark. His four-year-old son by his first wife, Ghanaian-born Sally Francesca Hayfron, died while he was behind bars. Rhodesian leader Ian Smith denied him leave to attend the funeral.

In the recent years the aging Mugabe’s health has been increasingly under the spotlight, particularly after he fell down a staircase after addressing supporters last year. He also read a speech to parliament in September apparently unaware that he had delivered the same address a month earlier.

In September he laughed off rumours of his own death, as he returned home from Dubai. Mugabe who is banned from travelling to the European Union regularly travels to Singapore for what is officially called a routine health check-up.