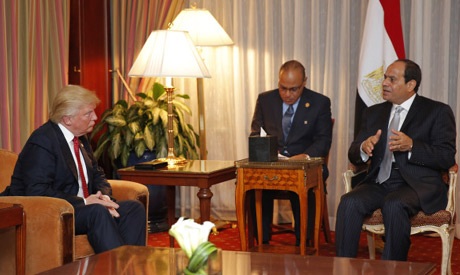 Delay is to allow new US administration time to work on solution to Israel-Palestine conflict, says El-Sisi’s office

Egypt has agreed to postpone a UN Security Council resolution against Israeli settlements in order to give the US a chance to resolve the Palestinian-Israeli conflict, the office of President Abdel-Fattah El-Sisi said in a statement on Friday.

The agreement was reached in a phone conversation between US President-elect Donald Trump and El-Sisi, according to the statement.

The phone call came hours after Egypt requested that a vote on the resolution demanding a halt to Israeli settlements be postponed following pressure from Israel and Trump, who called on members to veto it.

“The phone call touched on the draft resolution before the United Nations Security Council on Israeli settlements,” the president’s office said.

“The two leaders agreed on the importance of giving the new administration a chance to deal comprehensively with all the aspects of the Palestinian issue to achieve a comprehensive, final settlement to the issue,” the statement said.

Trump said in a statement that Washington should use its veto power to block the resolution.

During the phone call, the two leaders also discussed regional issues and the challenges they pose to international security and stability, while looking forward to boosting US-Egypt cooperation, according to the statement.

El-Sisi praised US President-elect Donald Trump in an interview with Portuguese media last month, saying he expected greater engagement in the Middle East from his administration.