The modern state of Yemen was created when the northern and southern parts of the country were forcibly united in 1990. The state brought together two elements with hundreds of years of divergent historical paths into one nation that cannot truly accommodate either. This lack of national identity has caused Yemen’s slow development, in addition to leading to the rise of civil war and militancy in the region. 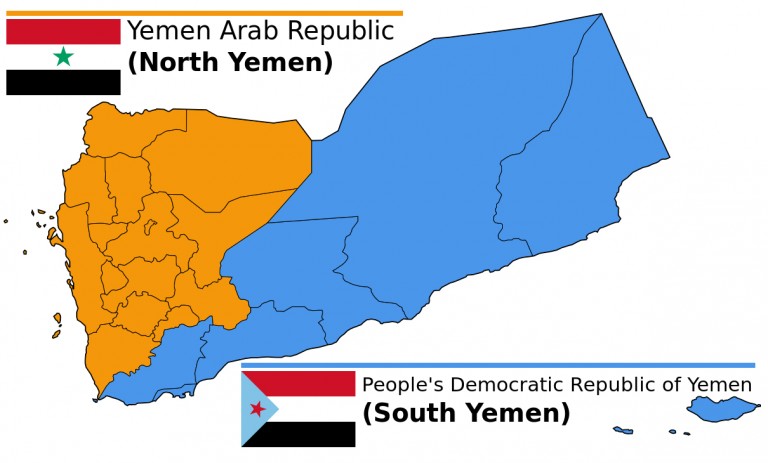 The role of national identity in the development of a country is undeniable: countries with strong national identities often manage to push through crises that would bring other countries to their knees. History is filled with examples of countries succeeding in often unimaginable endeavors through nationalism. The Iranian victory in the Iran-Iraq War and the rebuilding of Japan after World War II provide premier examples of this point. Countries that have failed to develop this sense of national identity are at a disadvantage. This is especially true about nations that were created unnaturally through political and military action in the last century, rather than ethnic or religious ties. Yemen is a prime example of forced political union: northern and southern Yemen, despite their close proximity and ethnic ties, have very different characters.

While the trajectories that are now witnessed in the region started in 1867 with the revival of Ottoman and British interest in Yemen, the division of the region between north and south was hardly the start of the schism. The Yemeni highlands had been developing independently of the lowlands for hundreds of years. Northern Yemen has been, since the days of the Umayyad Caliphs, the stronghold of the Zaydi Shias. The Zaydi Caliphs, who claim descent from Prophet Mohammad through his daughter Fatimah, eventually came to be regarded as leaders of the northern highlands. The south, on the other hand, is characterized by urban centers such as Aden and Lahj, and the areas around those cities are populated by Sunni farmers. But these parts, despite their urban nature, are still heavily influenced by tribal and religious ties, though tribalism here lacks the feudal nature of northern Yemen. Southern Yemen has either been under the power of regional and local dynasties or subject to the great powers of the Muslim world for much of its history.

A good early example of the division can be seen in the events that followed the first Ottoman invasion of Yemen in the 16th century, where the north, led by the Zaydi Imams, rebelled against the Sunni empire and expelled it after a century-long struggle. The south, lacking religious opposition to Ottoman rule, remained under Ottoman rule. In the aftermath of the withdrawal of the Ottomans from Yemen in 1636, the north was united under the Zaydi Imams, while the south was divided between numerous regional dynasties, the most prominent of which was the Sultanate of Lahej. Despite numerous wars and conflicts, this state of affairs continued until the 19th century.

In the 19th century, the British East India Company invaded and conquered Yemen, turning it into a base to safeguard its lucrative Indian Ocean and Red Sea trade routes against pirates. The Ottoman army, fresh from the modernizations that followed the Crimean War, entered northern Yemen and took advantage of the internal conflict that had engulfed the Zaydi kingdom. Ottoman imperial forces failed, however, to gain control of northern Yemen beyond the major urban centers, finally resolving to recognize the authority of the Imams over the highlands.

The collapse of Ottoman power after World War I allowed the Imams of the north to create a more consolidated state in the highlands. This state was not built on nationalist sentiments; rather the loyalty of tribes and the theocratic power of the Imam served as the basis of the nation. In the south, the British were struggling to administer a colony where they had to constantly worry about how each action would affect their relationship with different tribes.

In the years following World War I, the Imams of the north tried in vain to hold their autocratic and theocratic grasp on power. The revolution of 1962 that deposed the Zaydi Imams and the events that followed demonstrated one of the most detrimental effects of the lack of a sense of national unity. In states without a sense of nationalism, groups often feel a greater affinity to powers and regional actors outside of their own nation and, upon marginalization, they are likely to seek help from foreign patrons. This cycle of seeking foreign intervention has often culminated in civil wars, sectarian conflicts, and civil unrest in the Middle East.

In 1962, the army, led by Ali Abdullah Saleh, deposed the newly coronated Imam, who in turn escaped to the north and rallied tribesmen to retake his throne. The conflict escalated into a civil war and involved several regional powers. Republican nationalists sought help from Egypt, which at the time claimed the mantle of Arab nationalism, while the monarch and tribes loyal to him were helped by the Saudi king who feared a similar movement within his own young nation. At the same time, a nationalist movement in British-controlled south Yemen was quickly derailed by Marxist influences, and by the time the rebels had successfully evicted the British, the movement’s nationalistic agenda had been replaced by scientific Marxism.

After the revolution, Yemen was once again politically divided along the pre-existing north-south schism. The two states had differing ideologies and developmental paths, and while they both mainly subsisted on remittances from expatriate workers, northern Yemen expanded much more quickly. The side effect of increased contact with Saudi Arabia, however, was increased Salafist influence, and soon, the Salafists had developed into a faction of their own, affecting many aspects of life in northern Yemen.

It was not nationalism that brought the two regions together; rather, the weakening of the Soviets in the 1990s caused the two regions  to unite. The south’s socialist position was constantly weakening, and it is very possible that their leaders feared that northern Yemen would come to a deal with their regional protector, Saudi Arabia, which would lead to the south losing their power completely.

The union led to a restrengthening of tribal elements that had been in slow decline. Powerful feudal leaders in the north used their tribal connections to President Saleh, who notoriously favored members of his own Hashid tribal confederation, to acquire land in the fertile south, which along with the economic decline of the state led to discontent in the south.

The union led to a restrengthening of tribal elements that had been in slow decline. Powerful feudal leaders in the north used their tribal connections to President Saleh, who notoriously favored members of his own Hashid tribal confederation, to acquire land in the fertile south, which along with the economic decline of the state led to discontent in the south.

The nation-building endeavor in Yemen was greatly harmed by the southern secessionist movement of 1994, when the southern Socialist Party attempted to regain the southern independence, and its repression culminated in a sack of Aden that only intensified the already existing hatred of a so-called northern occupation.

The decision to unite the two regions did not sit well with the long dormant Zaydi elements of the Yemeni society either. It is very possible that the state tolerance of Salafist elements as a counter to socialism radicalized the generally moderate Zaydis and, in 2004, the Houthis rebelled against the Saleh government. The Houthis, backed by their Twelver Shia brethren in Iran, have asked for the curtailing of Salafist and Western influence in the region and have gone so far as to push for a return to the days of the theocratic Imams. In 2007, a large secessionist movement began in the south which campaigned for an end to northern control over what many southerners consider a distinct nation. The rise of these two movements has brought the united nature of the current Yemeni state into question.

The recent years have seen the return of tribalism to the Yemeni life, as the reemergence of Zaydi tribes has prompted the Salafists to do the same. The lack of a true national identity has therefore prevented the south from reconciling with the north. In the north, tribal and religious identity take priority over nationalism, leading to the state of civil war that we witness today.

Looking forward, it is difficult to imagine that Yemen would be able to keep its numerous factions contained without a sense of national unity to keep conflict in check. However, the creation of a national identity that supersedes religious and tribal feuds would take time and effort. Regardless of which faction prevails, however, the next rulers of Yemen will be forced to deal with extensive economic, social, and political problems before the country can hope to regain its rightful historical position as “Arabia Felix” — the Fortunate Arabia.