AT KIFUKU, a cattle ranch in Kenya, the dry-stone walls are reminiscent of England; by the farmhouse, a pair of boats sit on an artificial lake. The farm has, however, been anything but calm of late. Since September dozens of cattle-ranchers, some with assault rifles, have driven their cattle onto the farm’s 8,000 acres (3,238 hectares) of grass. Buildings have been wrecked, staff beaten up and a police officer shot and injured. “We’re all extremely tired and frustrated and short-fused [and] scared,” says Maria Dodds, the owner. By February 12th relief had arrived, in the form of an armoured car filled with policemen. 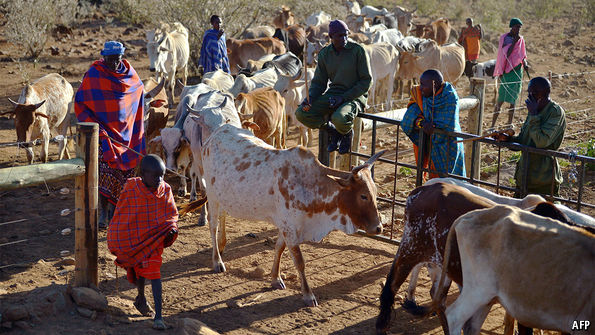 The invasion of Kifuku farm is one of a series that have taken place since 2013 across Laikipia County, a fertile plateau between Kenya’s central highlands and arid north (see map). Much of it is covered by private ranches and nature conservancies owned by white Kenyans such as Mrs Dodds and international investors. The attacks appear to have escalated in recent weeks. A tourist lodge was burned down on the Suyian Ranch on January 29th; visitors had to be evacuated from the Mugie Conservancy earlier in the month after a staff member was shot dead. In all 11 people may have been killed in such clashes, according to Reuters, a news agency. 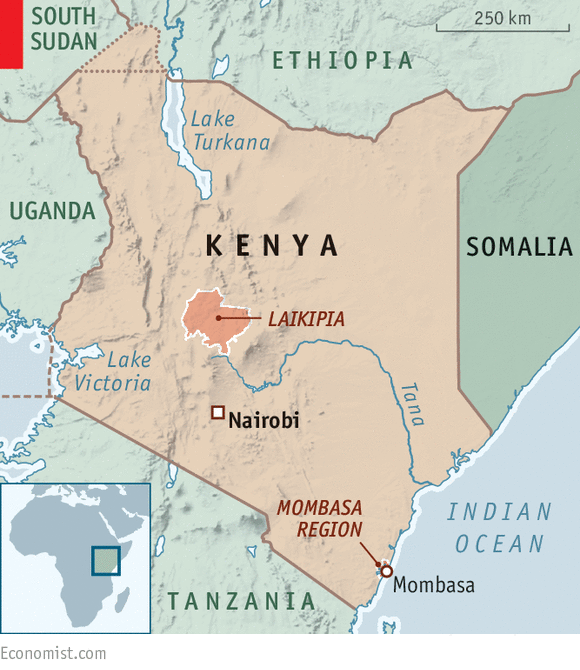 The armed incursions have drawn comparisons to the expulsion of white farmers in Zimbabwe. But the conflict in Laikipia, which has the second-highest density of wildlife in Kenya, is not black against white. John Wachira Mwai, a nephew of Mwai Kibaki, Kenya’s president until 2013, had to abandon his farm in July. He was shot by trespassing cattlemen and is still in a wheelchair. More than one smallholder has been murdered and hundreds have had their livestock stolen and their crops trampled. “The situation here is worsening day by day,” says Samuel Lopetet Apolosiri, a community activist who works across tribal lines in northern Laikipia. “We are facing intercommunity conflicts, cattle rustling and killing.”

One reason for the increased conflict is drought on Kenya’s overgrazed northern plains. Herdsmen have driven hundreds of thousands of cattle south, cutting fences along the way to get at grass they think is rightfully theirs. An aerial survey in April 2016 by the Laikipia Wildlife Forum found 135,000 “visiting” cattle, about the same number as “resident” ones. The number of visitors may since have doubled, reckons Peter Hetz, who heads the forum.

But tensions between landowners and herdsmen, many of them Samburu, date from well before the current drought. Efforts have been made to ease them by, for instance, reaching grazing agreements that allow cattle herders to bring their livestock onto private land during dry spells. But disputes still abound. “The ranchers and the police are colluding to intimidate us,” says one Samburu elder, who admits to illegal grazing on Segera Ranch, but is unhappy that his cows were “arrested” and that he was fined the equivalent of two cows. (Segera says its fines are equivalent to the usual daily grazing rates.)

However, it is no coincidence that incursions in Laikipia have worsened since 2013, the year that Kenya’s devolved constitution came into effect. This established county governments, with the aim of giving each of Kenya’s many tribes a fair share of government revenues. An unintended consequence is that local groups now have more incentive to fight to control county governments (and their money) ahead of elections in August. Vote-hungry politicians are inciting their kin to grab land and even to displace rival communities.

In Laikipia the young men carrying out armed invasions are mainly from the Pokot and Samburu tribes. Mathew Lempurkel, the member of parliament for Laikipia North, blames the violence on the police, and says that herdsmen are justified in shooting back. “If the government becomes a threat, the people have to protect themselves,” he says. But others accuse Mr Lempurkel, a Samburu, of inflammatory rhetoric; for example, claiming on local radio there was no such thing as private land in the county. “Politicians are exploiting the drought,” says Richard Leakey, the chairman of Kenya Wildlife Service.

National politicians, from the deputy president to the interior secretary, have said private land should be respected and the violence must stop. The president, Uhuru Kenyatta, repeated the warning on a voter-registration drive in the region in January. But many of those affected in Laikipia suspect the government of ignoring the invasions to avoid jeopardising its vote. Mrs Dodds says she appreciates the efforts of the police who protect Kifuku. The farm will recover when the herders leave for new pastures, says her husband, Anthony Dodds. But he worries about the hundreds of smallholders on Kifuku’s southern borders: “They’re really on their knees.”