In the last couple of days, Dutch news agencies were busy reporting on the intended and controversial YPFDJ annual conference planned to be held in the Dutch city of Veldhoven. The meeting was banned by Veldhoven’s mayor for fear of public disorder after police reportedly arrested 128 protesters. Veldhoven’s mayor decision was upheld by the court in Den Bosch following an appeal by the YPFDJ conference organizers. The ban of the YPFDJ conference by Dutch authorities might have created a euphoria among the organizers of the protest against the conference. However, whether we like it or not, the result is a zero-sum game. In economic and game theories, a zero–sum game is a mathematical representation of a situation in which each participant’s gain or loss of value is precisely balanced by the losses or gains of the value of the other participants. In my humble view, no one wins from the ban of the YPFDJ annual conference and no one losses of not conducting it, but Eritrea. Below is why? 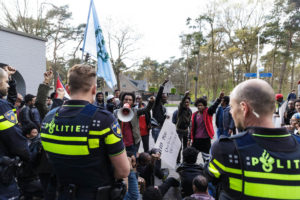 Secondly, it vertically contradicts with the idea that change can emanate from inside an authoritarian system because we trust there are democratic forces within the undemocratic system of government in our country. Thus, the youth under the umbrella of the YPFDJ can be one force for democratic change in Eritrea. There is no doubt that these young people are more critical than anybody else in challenging the government during the annual conferences. As for anyone else, the regime in Eritrea keeps ignoring the demand of the YPFDJ for democratic change and the rule of law under different excuses and pretexts. Nevertheless, these manipulations will not last long, and we should be careful in treating our youth. After all, these are bright young people who can potentially lead us to change and prosperity.

In conclusion, the organizers of the protest didn’t get it right. Anyone has the right to voice and protest. However, it is judicious to take others rights to organize, convene and maintain their views into accounts. The protesters could have done it differently. Instead of dehumanizing the youth participants they could have prepared their messages and handover to the participants of the conference by staying on the conference hall entrance. Also, organizers of the protest could have respectfully brought forward their messages across the participants of the conference way before the due date of the intended conference. By doing that, the youth can be empowered and potentially contribute to the ongoing change process.

The Parable of Veldhoven

Under the title of “Dutch Authorities Banned YPFDJ Conference: A Zero-sum Game for Eritreans”, Mr. Teweldeberhan Gebre, attempts to explain away the showdown in Holland within the simplified and naïve frame of the game theory. Mr. Gebre would have been more truthful if he explained the unfolding events in Veldhoven applying the more realistic common-sense “theory” of cause and result. Indeed, there is cause and result in everything that happens in this wonderful world. Enjoy!

During the Reign of Emperor Haile Selassie of Ethiopia there were three brothers born in the blessed land of Erena. Their parents called them simply A, B and C—A like Abraham, B like Benyam and C like Caleb. A, the eldest, decided to join the resistance like his father Hagos did before him. After a few years C, the youngest decided to also join the existential fight for the survival of the homeland. The nationwide strife against the colonial masters raged on for decades and consumed the precious blood of thousands including that of A and C. A perished at Halhal on the last day of September 1982 and C fell during the liberation of Massawa in February 1990. The following year more than a century of occupation ended. The people of Erena were free at last!

Hagos returned home half-blind with a crippled left leg and with the two sons of Abraham and the nine-year old daughter of Caleb. Negisti his wife had died from a broken-heart. The three children were war orphans. Benyam and his wife Sara gladly took over the responsibility for the three children and grandfather Hagos.

Alas, soon all family members realized that the intoxicating joy of liberation was short-lived. Benyam shut the family-owned brick-making works and went to Sawa. Hagos assumed the role of the bread-winner by taking up a night guard job at a local nightclub favored by the children of the nouveau riche liberation war elites. Each passing year the Hagos family’s hope for redemption was dashed.

Hagos’ health was rapidly deteriorating and his will to live was eroding with each passing week. In desperation, Sara decided to contact her cousin Almaz and beseeched her to save Abraham’s two children from the servitude military camp called Sawa. It took much resource and time but the two young men, after a perilous journey, ended up in Maastricht, Holland. For all practical purposes, Erena had been turned into a country not for young people—where dreams to study, to work and to build a happy family with a bright future had been stolen by the new homegrown rulers.

On Good Friday 2017, Almaz’s 20-year old (made-in-Sweden) daughter Luna came face-to-face with liberation war martyr Abraham’s two sons (Dawit and Filimon) but on the opposite side of the picket line. Luna had just left the bus which brought her and the rest of the Swedish contingent to the YPFDJ conference center. Dawit and Filimon were shouting slogans against the ruling party’s romance with the sons and daughters of regime-anointed Diaspora parents. They did not recognize each other in the melee but Luna and the two brothers share the same lineage and country.

For Luna, Erena is a summertime paradise with ample distraction that spirits away her senses from the drudgery of working in a high-street pharmacy in Stockholm. For Dawit and Filimon today’s Erena is a vast open prison where the regime possesses everything except the air we breathe—the land and all infrastructure on it (including veteran fighter Hagos’ house) and every living creature on the land, especially the youth.

Postscript: Why does meskerem.net babble about the violation of the Dutch constitution when there isn’t any constitution back home in Eritrea. Dear meskerem.net, does Mr. Yemane Gebreab or for that matter the mayor of Asmara permit Sawa-alumni to assemble and confer in their homeland?