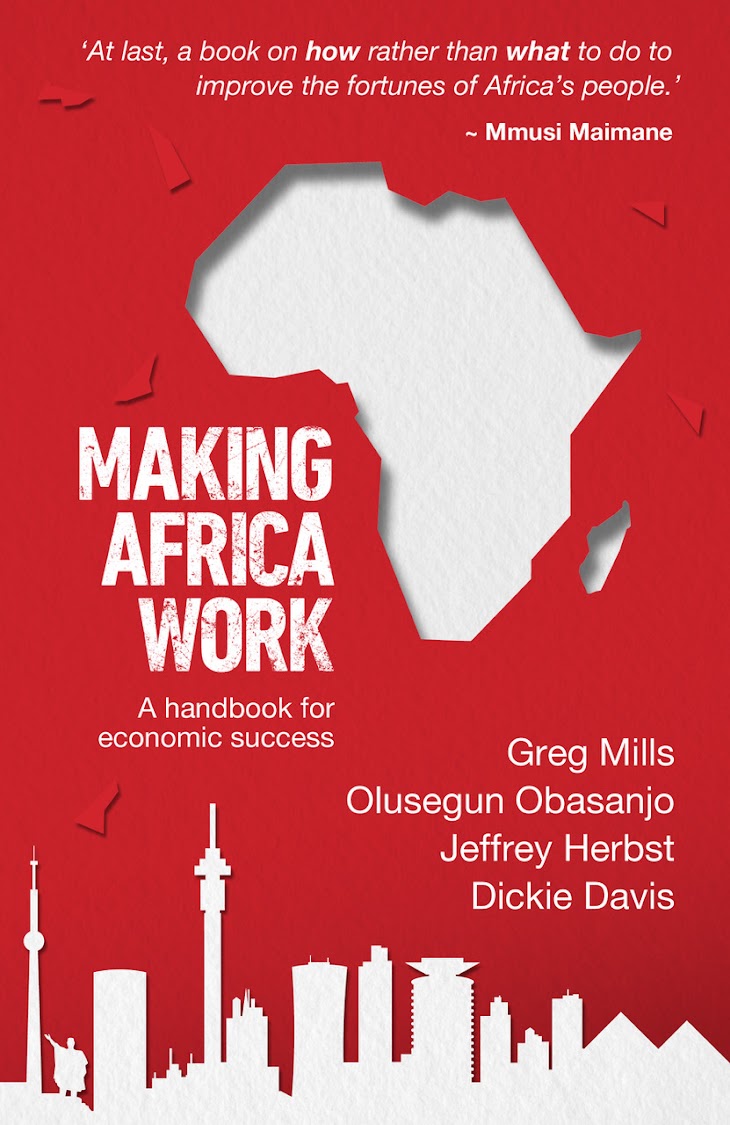 Tafelberg – The origins of this book go back to 1990, when Nelson Mandela asked Harry Oppenheimer to help smooth the path to transition by facilitating a roundtable involving SA’s top business echelons and ANC leadership.

Held at Oppenheimer’s Brenthurst Estate in Parktown, the meeting seeded the formation of the Brenthurst Foundation, which aims to shape policy towards improved economic performance. Today, the foundation has a pan-African ambit and its associates and advisory board members include former presidents, one of whom is an author of Making Africa Work.

By 2010, the foundation would have felt rewarded. The McKinsey Global Institute published its Lions on the Move report, a refreshingly upbeat prediction of the potential about to be unleashed in African economies. But since then commodity markets crashed, political uncertainty escalated in many countries and growth rates have stalled.

McKinsey has backtracked and is projecting three trajectories for African economies: stable, vulnerable and slow-growers. Optimism seems absent from any of these; Africa’s economic awakening, for now, has proven to be a false dawn.

Africa has half the world’s arable land, but relies on imports and food aid to feed its people and still more than 200-million people in sub-Saharan Africa are undernourished or often hungry.

The Mo Ibrahim Foundation prize for African leadership has been awarded only once in the past five years. Excluding terrorism, there are six civil wars or major military engagements in Africa — more than in any other region.

Even where democracy is in place, governance is hindered by logistical bottlenecks, incapable administrators, urban unemployment and basic safety concerns.

The Social Progress index confirms that almost all African countries rank shockingly in providing their citizens the foundations for wellbeing and development.

This is the real backdrop to an unrealistic book.

EACH CHAPTER’S SYNOPSIS OF ACTION POINTS READS LIKE A CORPORATE VISION DOCUMENT.

The authors, like bubbly business leaders, see opportunities. Their glass-half-full, future-focused approach — whilst acknowledging no quick-fixes — is admirable. Each chapter’s synopsis of action points and itemised to-dos reads like an extract from a corporate vision, mission and strategy document.

The book reflects a degree of academic quality in the research, data, cross-referencing of similarities or differences across countries and its quest for lessons from other developing nations such as Panama and Brazil.

Singapore is referenced often, its rapid rise highlighted as evidence of what can be achieved. In adopting a “laser-focus” on economic growth, an outward-looking globalised stance and zero tolerance for corruption, it is modelled as a counterpoint to the mistakes of postcolonial Africa.

Ironically, in the late-1960s Singapore was looking to Africa for the route to growth: in 1968 a group of senior Singaporean officials visited Kenya to seek advice — Kenya being the comparatively more developed nation at that time.

Making Africa Work also contains sections of erudite, dramatic sweep, such as in the description of the railway journey from Zambia to Tanzania. Sadly, it also conveys the scale of dysfunction and disrepair. And unfulfilled potential: what could be an empowering intracontinental link, a pan-African trade connection, is nothing more than a haphazard, rickety carrier of low-quality manufactured flotsam and unbeneficiated raw materials.

The book is comprehensive in its coverage of sub-Saharan countries. But 54 nations have myriad differences and even when outliers prove the rule — such as President Paul Kagame’s de facto dictatorship achieving economic gains for Rwandans — the generalisations weaken many conclusions and recommendations. And solutions to monumental problems are not as simple as rolling up sleeves and applying templates from textbooks.

The book lacks a sense of history — not the sort that tells of the construction of railroads or shame that is postcolonial neglect, but a narrative that recognises the extent of six centuries of plunder.

Martin Meredith’s 2014 epic history, The Fortunes of Africa, showed how the continent’s resources have benefited the world, but Africa minimally. And history rolls on: recently, a consortium of nongovernment agencies under the banner of Global Justice Now released Honest Accounts: How the world profits from Africa’s wealth, with the startling conclusion that the world still takes more from Africa than it gives, by $41bn.

Government debt repayments, multinational profits repatriated to foreign shareholders, nonpayment of corporate taxes, illicit outflows and illegal activities all mean that the continent’s citizens may not have a fair deal.

So, whether assessing history or envisioning the future, perspective is everything. The exploitation of Africa — whether measured in centuries, or in the capture and control by political elites — is not easily erased by blueprints to harness technologies, or by designs to better connect people through $93bn of infrastructure investment.

Making Africa Work repeatedly links economic success with political stability and the freedoms inherent in a genuinely open society, noting that “[d]emocracy and development are indivisible”. But the commentary and tone are couched in political correctness; there is no outright critique of a specific government or leader.

Which raises the question: who is the book aimed at? Resolute in its optimism, Making Africa Work is written with a fundamental collective blind spot on the part of its authors: the belief that the Big Men of Africa care.

The continent continues to haemorrhage its people’s hopes and leaders capable of cauterising the core problems are few and far between. Paradoxically, the book leaves one informed about Africa’s challenges, but no less chagrined as to the complexity of possible solutions.

It is an overly subtle call for dynamic leadership and a rigorous playbook on how to restructure Africa’s economies. Who, readers must wonder, is listening?