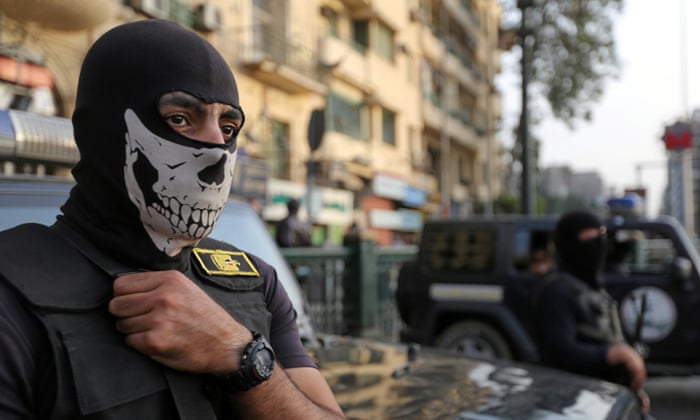 A masked member of the security forces in Cairo, November 2016. The HRW report says security forces routinely use torture to make suspects confess, or to punish them. Photograph: Mohamed Abd El Ghany/Reuters

Egypt’s president, Abdel Fatah al-Sisi, has given police and national security officers a green light to use torture with impunity, according to Human Rights Watch.

Arbitrary arrests, enforced disappearances and torture against perceived dissidents by police and security forces is common, leaving people with no hope of justice, the rights group said.

Egypt’s epidemic of torture, with techniques including an “assembly line” of beatings, electric shocks, stress positions and sometimes rape by security forces, could amount to a crime against humanity, it said. Torture is against the Egyptian constitution, as well as international human rights law.

HRW’s 63-page report, We do unreasonable things here: torture and national security in al-Sisi’s Egypt, documents how security forces, particularly the offices of the interior ministry’s national security agency, use torture to force suspects to confess, divulge information, or to punish them.

“President al-Sisi has effectively given police and national security officers a green light to use torture whenever they please,” said Joe Stork, HRW’s deputy Middle East director. “Impunity for the systematic use of torture has left citizens with no hope of justice.”

The report, published on Wednesday, comes after the British government was criticised for a lack of transparency over £2m in aid and defence funding given to security projects in Egypt, including support for policing, the criminal justice system and treatment of juvenile detainees.

“Al-Sisi’s pursuit of political stability at any cost has granted the country’s chief domestic security institution, the interior ministry, a free hand, perpetuating the same abuses that fuelled the 2011 uprising,” the report said.

Since the military coup in July 2013, Egyptian authorities have arrested or charged 60,000 people, tried thousands in military courts and passed death sentences on hundreds more. Many have disappeared for months at the hands of security forces, it said.

Last year, Ibrahim Halawa, an Irish citizen who has been detained in Egypt for four years without trial, told the Guardian he had been stripped, beaten and left for dead after a hunger strike. The Irish government have been trying to secure the release of Halawa, who was arrested in Cairo in the aftermath of protests in 2013.

The primary target of repression has been alleged sympathisers of the Muslim Brotherhood, the country’s largest opposition movement, which rose to power after the 2011 uprising but has been the subject of a crackdown since 2013.

HRW said the interior ministry had developed an “assembly line” of serious abuses, which begins at the point of arbitrary arrest, progresses to torture and interrogation, and concludes with presentation before prosecutors, who “often pressurise suspects to confirm their confessions and almost never investigate abuses”.

After a “welcome party” of beatings, detainees are stripped naked, blindfolded and subjected to electric shocks, most often to their genitals. They are forced into stress positions, including one known as the “grill” or “chicken”, in which detainees are suspended from their limbs on a bar, causing them excruciating pain.

The report is based on interviews with 19 former detainees, and the family of a twentieth detainee, who were tortured between 2014 and 2016, as well as on dozens of reports of torture by Egyptian human rights groups and media.

One former detainee told HRW researchers how police at a Cairo station had raped him anally with a stick. Another, who had been held by national security officers at a facility in the Giza governorate, told them how they had pulled out one of his fingernails and bitten off part of another.

Khalid, 29, told HRW he had been arrested by national security forces in 2015 and told to admit to participating in arson attacks on police cars the previous year. The torture and interrogations lasted for six days, he said, during which time he was allowed no contact with relatives or lawyers. Officers forced him to read a prepared confession.

“You’re at their mercy,” Khalid said. “They electrocuted me in my head, testicles, under my armpits. They used to heat water and throw it on you. Every time I lost consciousness, they would throw it on me.”

Torture has been endemic in Egypt’s law enforcement system for decades and abuses by security forces helped spark the 2011 uprising against long-standing former president Hosni Mubarak.

Since the military – under the then-defence minister al-Sisi – ousted Mubarak’s democratically elected successor, President Mohamed Morsi, in 2013, the authorities have “reconstituted and expanded the repressive instruments that defined Mubarak’s rule”, HRW said.

It found that prosecutors had investigated 40 torture cases between July 2013 and December 2016 – a fraction of hundreds of allegations that had been made. However, only six guilty verdicts had resulted against interior ministry officers, all of which are still on appeal.

HRW said al-Sisi should direct the justice ministry to create an independent special prosecutor to investigate abuses. “Allowing the security services to commit this heinous crime across the country invites another cycle of unrest,” Stork said.

The interior ministry has previously denied allegations of systematic torture.