Zimbabweans cheered and sang as they learned that their president’s 37-year rule was over. But they understand the dangers ahead

Robert Mugabe’s removal from power on Tuesday was greeted as his ascension to it 37 years earlier had been: with jubilation. In Harare there was dancing and singing, honks and cheers, and tears of joy. Many of those celebrating have known no other ruler. Once he was a liberation hero to his people. When he lost their support he hung on by every means at his disposal. Now his brutal reign is over. But the hope is shaded this time by deep concern about what lies ahead. 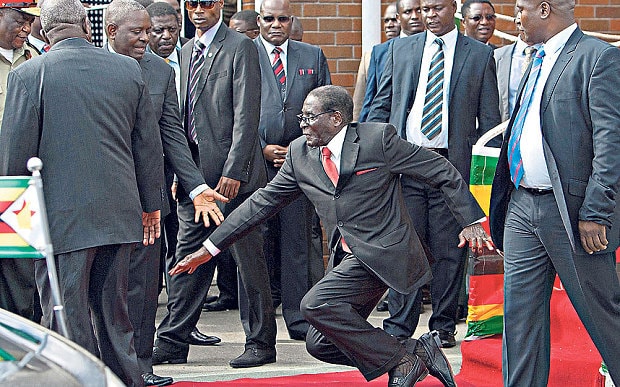 Forcing his resignation was hardly simple: it took much manoeuvring, a military intervention and the opening of impeachment proceedings before he had to bow to the inevitable. What comes next is murkier still, though Emmerson Mnangagwa, his recently fired vice-president, is expected to take over. There is not much exultation on that score, except among “the Crocodile’s” relieved allies. They had attempted to brand a transition effected primarily by the military and factional interests in Zanu-PF, intent on preserving their own power and resources, as “a new era” – to understandable scorn. Mr Mnangagwa understands that he is not a popular figure in the country, even if the military seem to like him. He does not share Mr Mugabe’s liberation aura, yet is branded by their terrible record in power. His role in removing Mr Mugabe may lend him a degree of credibility, but his best hopes will rest on reviving the economy – and, perhaps, on deferring next summer’s elections for as much as three years.

The opposition is weak and divided, and Morgan Tsvangirai, leader of the Movement for Democratic Change, in poor health. They were so badly damaged by power-sharing before that they are immensely suspicious of entering a transitional administration. But they may believe a deferral would help them, too; and the president’s resignation has undercut their leverage.

Some in civil society fear they will negotiate harder for political positions than for commitments to the structural measures so desperately needed for free and fair elections, including a sorely needed overhaul of the register of voters, full independence for the electoral commission and reform of the repressive cyber-security regime. Those celebrating on Tuesday are hopeful, not naive. Some thanked the generals. But many of those toasting Mr Mugabe’s departure are not supporting a coup, but its result.

They know the part that Mr Mnangagwa and the military played in his rule. They understand the dangers ahead. But they also know that a man they loathed has gone; that Zanu-PF has fractured; and that Zimbabwe has a great deal on its side: natural resources; plenty of young, well-educated, ambitious citizens (even if many have left the country in recent years); and historically strong infrastructure, even if political institutions desperately need to be rebuilt. To make the most of those assets, the people will need support. Theresa May described Britain as Zimbabwe’s “oldest friend”, an interesting gloss on its colonial history. Mr Mugabe was initially backed by UK cash. That and much more gives Britain a special responsibility to support Zimbabweans; but also makes it all the more essential that it listens and responds to their wishes, without attempting to impose an agenda. When tens of thousands took to the streets at the weekend, they insisted on their stake and voice in these proceedings. Will they get it?