An investigation into the lucrative business of morality policing in Sudan, and its disproportionate impact on women

For journalists, Sudan is one of the most restrictive countries in the world. Censorship is rife, critical outlets are routinely suspended, and journalists face the threat of arbitrary detention and intimidation. A new draft law, allowing the government-run press council to ban any journalist for an indefinite period, is currently being considered by cabinet.

In this environment, so hostile to free speech, Sudanese journalists are still holding their government accountable, and speaking truth to power.

This report is the first in a series published by the Mail & Guardian in collaboration with Ayin, an independent Sudanese media house, which provides a platform for Sudanese journalists to report on sensitive issues. For their own safety, the journalists write anonymously.

Sarah Ahmed, 18, could not control her feelings as she narrated her story at the Public Order Court in Khartoum. The slim, seemingly bewildered girl started to cry. Sarah had gone to the bustling capital Khartoum to study for university and was residing at one of the campus dormitories. 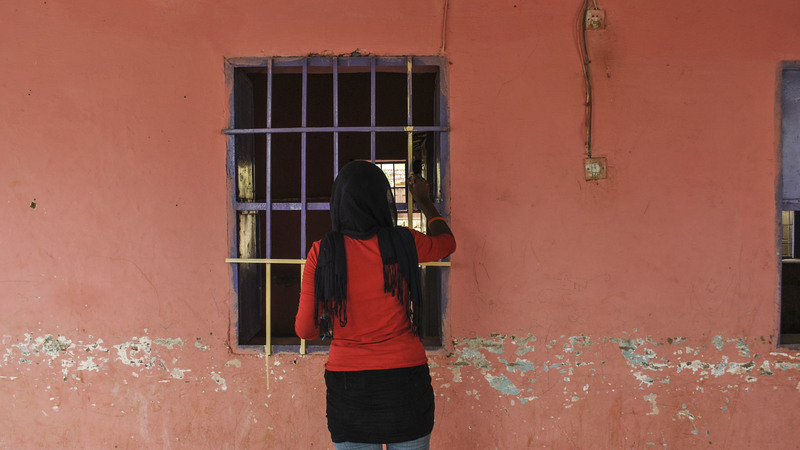 “I visited one of my friends in her workplace in one of the restaurants in the Riyad area in Khartoum,” she said. “During my visit, police raided the place – arresting me together with other girls who worked for the restaurant including my friend.” Sarah had no idea why they were arrested as they shoved her and other young women into a police truck that was parked in front of the restaurant, all the while verbally abusing them.

Upon their arrival to the Public Order Courts, Sarah witnessed first-hand the institution’s flawed justice. The only witnesses to their “crime” and the only evidence provided came from the police. “When we arrived, we were made to stand before the judge who told me I was found smoking shisha,” Sarah said.  “I told him I had never smoked shisha in my life and there was no shisha on the table where I was seated.” The judge simply ignored her defence and accused her of indecent dress for wearing trousers. The five-minute court verdict sentenced her to 40 lashes and a fine of 7 000 Sudanese Pounds (roughly $1 110).

These near-instant verdicts, usually against poor Sudanese women, have become a huge earner for these courts, raking in profits for judges, security personnel and those loyal to the government. According to a recent survey by Sajeenat, a research and advocacy organization focusing on the rights of female prisoners in Sudan, 70 percent of all public order cases involved women. In 60 percent of these cases, punishment came in the form of heavy fines.

The only witnesses to their “crime” and the only evidence provided came from the police.

The Public Order Courts started in 1995 under the current National Congress Party, according to Ahmed Subeir, an advocate and legal advisor to several local civil society organisations. While Sudan is historically a conservative, Islamic society, a stricter form of Islamic law developed under the current government that rose to power in a coup in 1989. Authorities often punish Sudanese women caught wearing trousers instead of a long dress, for instance. This strict, perceived morality code is now used by the state to earn money.

This translates to roughly $6.75-million per year – almost as much as the entire health budget for Khartoum State ($7.25-million).

Advocate Nabil Adeeb has written extensively on the Public Order Courts, defining them as “spontaneous courts” that provide no option for the defence, and listen only to the prosecution and police. “Arrested and tried in less than 24 hours, these courts are competing with fast food restaurants in terms of speed,” he said.

Public Order Courts disproportionately target Sudanese women. If these courts arrest a woman it can severely affect their social status, including their chance of marriage, Adeeb said. Fearing social stigma, women often accept trumped-up charges from the Public Order Courts, including lashes, without protest and without informing others of their plight.
“Court revenues have become more important than justice itself,” says Subeir. The more revenue judges procure, the greater the likelihood of promotion, he added. “The system encourages the judges to convict the victims. It is rare for them to defend any case.”

There are no fiscal caps to the fines issued at the Public Order Courts – the rates vary according to the whim of the judges, he said. Smoking shisha is a punishable offence under Sudan’s Public Order Law with a fine of 200 Sudanese Pounds (roughly US$34), but some judges fine their accused as much as 7,000 Sudanese Pounds (US$1,110).

One Public Order Court judge, who preferred to remain anonymous, refutes Subeir’s claims and said the Public Order Courts play a positive role in controlling society and preserving good conduct. He explained that most cases were related to brewing and drinking of wines and, more recently, drug use. Most of the cases get no less than six months imprisonment, according to the same source, but often judges reduce these prison times by issuing fines that are set according to the economic situation of the accused.

“Arrested and tried in less than 24 hours, these courts are competing with fast food restaurants in terms of speed…”

Nevertheless, huge discrepancies exist in terms of financial resources available for Public Order Courts compared to regular courts, said a cashier at the Public Order Courts, who also preferred to remain anonymous. “I have never seen any suspect acquitted,” he said. “Getting convictions is crucial for both judges and police since their salaries, allowances and promotions come from the percentage from these courts.”

According to the cashier, police design their raids on where they think the most money can be made. “These courts turn people into criminals,” he said. “If police raid houses of people and falsely accuse them of adultery, how can you defend yourself?”

A Public Order Police officer who spoke to Ayin confirmed they are required by the courts to procure a high number of cases. The arrest campaigns are often conducted near the weekends to ensure the suspects spend time in jail, the officer said. After spending time in the prison under extremely poor conditions, people become willing to pay any amount of money set by the judge to be freed. In other cases where the suspects are not wealthy enough to cover the exorbitant fines, he said, they are incarcerated until relatives can foot the bill. “I swear by Allah that the majority of suspects who are brought to these courts are poor people. What happens to them here is looting,“ he said. The police officer said he feels frustrated and powerless to stop the process.

Sometimes, the sentences handed down include corporal punishment as well as a fine. Sarah Ahmed’s case is a good example. She was sentenced to 40 lashes, despite the fact that she is diabetic. “When they started whipping me I appealed to them to stop but they gave me a deaf hear and thoroughly beat me,” she said. She still has wounds that have not healed, even five months after treatment.

Unable to pay her fines and fearing her parents would not sympathise with her situation, Sarah Ahmed spent a month in jail without telling them. She feared her parents would prevent her continuing her studies if they heard she was arrested by the Public Order Courts. “The four ladies who were with me were working at the restaurant so the restaurant owner paid their fines. But as for me, it was not possible so I had to remain in jail for a whole month until a good Samaritan came and paid,” she said.

Her first time in prison, Sarah said she faced daily verbal abuse from prisoners and wardens alike. “One thing that makes me very sad is the fact that I had not committed any crime and did not get the chance to defend myself. Since that time, I knew what it means to live in a country that does not respect human rights or real laws.”

Some names have been changed to protect the identity of interviewees.