Hage Geingob is the current president of Namibia, having been in office since March 2015. Geingob was also modern Namibia’s first prime minister, and played a crucial role in Namibian independence and the adoption of Namibia’s constitution in 1990. The HIR recently spoke with Geingob about his major policy developments while president, as well as his experiences from Namibia’s constitution-drafting Constituent Assembly. 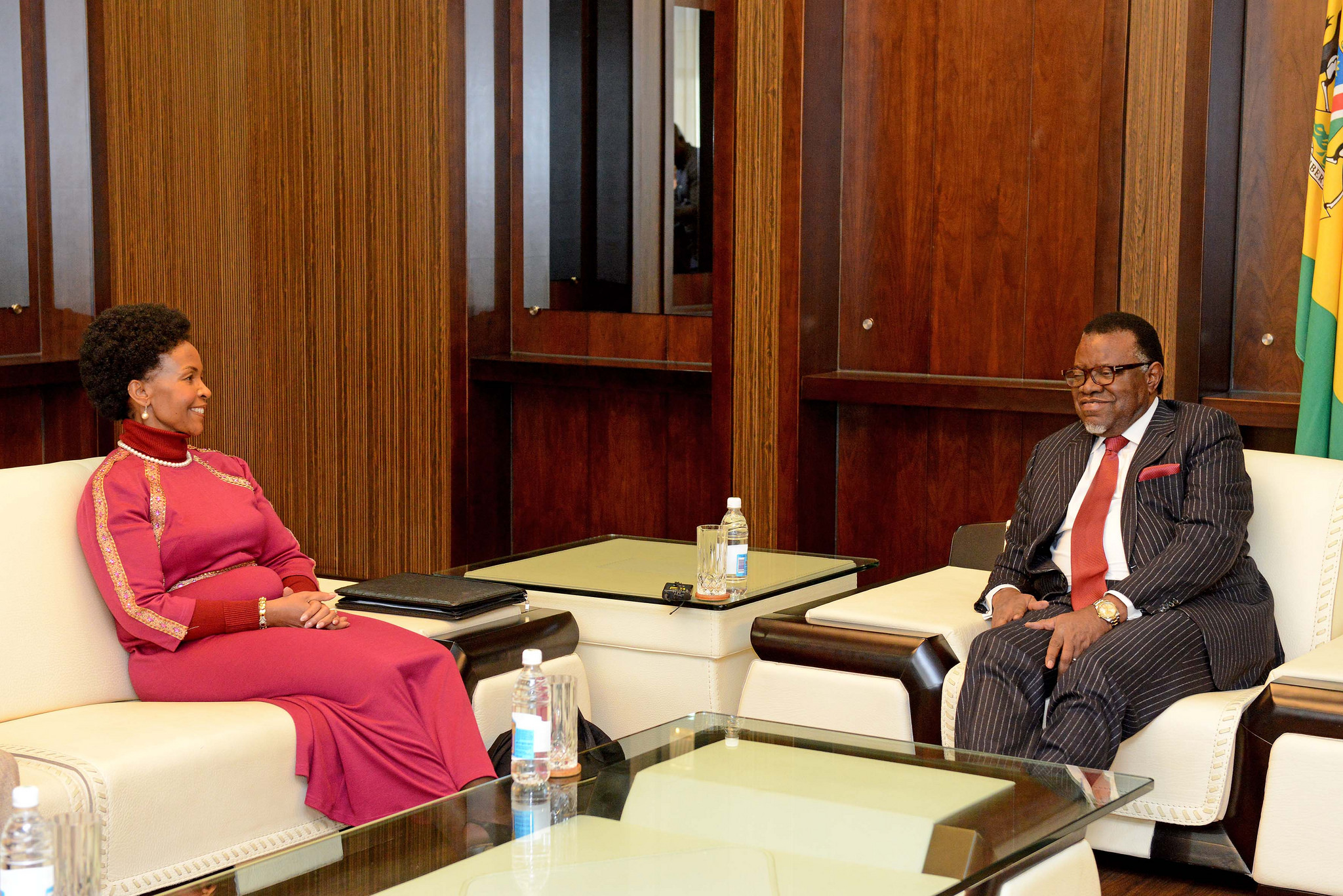 President Hage Geingob of Namibia (right) meets with Minister of International Relations and Cooperation Malte Nkoana-Mashabane of South Africa. Photo by the Government of South Africa, CC 2.0, via flickr.

How has SWAPO’s (South West Africa People’s Organization) so-called “zebra” system to promote parliamentary gender equality progressed since your 2014 election, and based on its success, could you see a similar policy being implemented in other legislative bodies worldwide?

Yes, indeed. We have been struggling for a long time to bring more women into parliament, but were failing. So we decided to have a new kind of a policy, that we were going to have 50-50, like a ‘zebra’ as we call it. There are two kind of roles—one for women only, and another one for men. We all voted for women, and they are ranked, from one to whatever, and the same with the men: men, women, men, women [on parliamentary ballots]. That’s how we achieved from 22 to 47 percent [women] in the parliament. Also, in the parliament, a young lady is the prime minister. The deputy prime minister is a lady. Two educational ministers are, both of them, minister and deputy, female.

You proposed private sector solutions to the problems of high unemployment and high poverty rates, both of which represent between one quarter and one third of Namibia’s population. Specifically, how do you plan to stimulate this private sector growth?

Firstly, we have good governance. You need that in a lawbased society—having that creates an investor-friendly and business-friendly atmosphere. Therefore, we want the private sector to play a pivotal role, as government alone can’t do it. Providing a conducive, investor-friendly environment would inspire the private sector to invest, and right now, already local businesspeople are having trust in the government, and they’re investing, so they are going to inspire the foreign investors to also come and invest. We have resources that [foreign investors] can take and need, like the uranium… The money I get I can then use to build clinics and schools and infrastructure.

Namibia is moving towards withdrawing from the International Criminal Court. Could you elaborate on your government’s reasons for withdrawing?

I always look at what is happening in the United States. You have processes, systems, and institutions to buttress democracy. Africa brought in the International Criminal Court because [much of Africa] didn’t have institutions. Now I’m saying, in Namibia, you must have processes—a lot of processes that must be foolproof—and you must have systems and institutions. That’s what happened in the United States, with Gore and the 2000 presidential elections. When you failed to confirm that the process was conducted with transparency, with accounts from both sides, then you had the institution of the courts. In Namibia, we have very independent courts, and they can try me—we [in the government] do lose cases. So therefore, we don’t need the International Criminal Court. Firstly, the court is only aiming at Africans. We asked [then Secretary of State] Hillary Clinton in Kenya why they are urging Kenya to go to the Court, but the United States didn’t sign up as a member of the Court. They said that Kenya signed, but the United States didn’t sign up, a simple answer like that. So it’s a court maybe meant to deal with those who are misbehaving in third world countries. But we are aiming to be a first world country! We have our systems, and our governance is active. So why go to somebody else for a trial?

When you were leading the Constituent Assembly in 1989, and working on the new constitution, what do you think were some strategies that helped unite people in the Assembly, and how did you balance listening to multiple voices but also making sure that the new constitution battled injustice?

Any governance must be inclusive. I say exclusivity spells harm, exclusivity spells conflict. Even in drafting the constitution, first I went to the leaders of the opposition. We came from exile and had a difficult situation, so I went to them in their houses, I met them in a private setting, and said, “Look, what are your fears of our black government?” just as a way to build confidence. Then, through that we could chat more as human beings. I told them about our needs and how to have [better conditions] for our kids… [and then they said] “Oh, those are the same concerns we have.” So I said it’s a fear of the unknown, because we are not communicating, we are not talking. Alright, so once we have found each other as humans, let’s go draft the constitution. First, I took the areas that we agreed on in our different drafts; I look and edit, and I said, “Look, there are commonalities here. Let’s look at material differences.” There were only three, on the executive system, the parliament, and then voting. So we isolated those and then tackled them, and it took three months. Confidence-building is definitely important. You must trust each other. When you negotiate with people there must be respect on both sides. It was a win-win situation for both. And then we could move on, and we did it in three months.