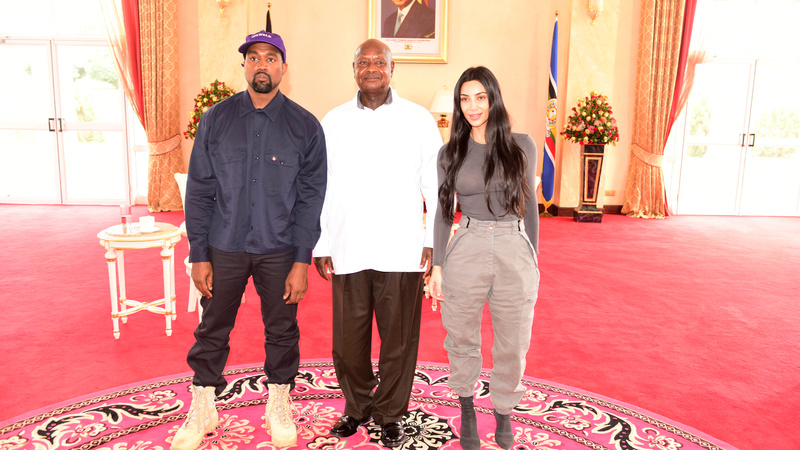 In a world where power is measured in Instagram likes, Kanye West and Kim Kardashian-West are royalty.

They are celebrity supernovas blazing a trail through the social media firmament, demanding our attention and sucking us into their capricious orbit. Love them or hate them, you can’t avoid them.

Donald Trump, the American president who owes his position in part to his expert manipulation of social media, lives in this world.

Even he was outshone when Kanye descended on the White House last week. Say what you will about the Make America Great Again cap, but there’s no doubt that Kanye wore it better.

Yoweri Museveni, the 76-year-old Ugandan president who has been in power since 1986, lives in a very different world. His power derives not from Twitter — although he does tweet, sometimes, with a fondness for homespun farming advice — but from the tanks that he commands; from the elections he has won, or rigged in his favour; from his control over the finances of an entire nation.

These are real things, with real consequences, for real people.

On Tuesday, when Ye (as he is now known) and Kim rocked up at State House in Kampala, these worlds collided, with excruciatingly awkward results. Museveni began by asking Kim what exactly she does for a living before awkwardly accepting Ye’s gift of a pair of Yeezy sneakers. Thoughtfully, Ye brought his own pen to sign them.

“Very good,” says Museveni, bemused. “They are for football, or for what?”

Ye tries to explain that he is in Uganda to make a music video, but he immediately loses Museveni — and, frankly, everyone else — with an inexplicable reference to Jurassic Park.

“What is a Jurassic Park?” Museveni asks, sounding genuinely interested. He thinks of himself as a conservationist, remember; maybe he thinks there is something he can learn.

“You know, where they design dinosaurs, it’s a, uh…” replies Ye, hands flailing. He is unused to interruption.

Then Ye gets serious. “I know there’s tourism, but I would like to know what other industries that you would like to build, and have a discussion about. What would make the entire country be the most, like, to build Wakanda, that would be the most thriving, you know, so that we could show…”

And suddenly, it all makes sense. Ye has not come to visit Yoweri Museveni, the ageing, autocratic, sometimes brutal president-for-life of the very real Republic of Uganda. Despite their best efforts, their worlds are so different that they are mutually exclusive, and they have nothing to talk about.

Instead, Ye has come to pay his respects to an African republic that he is all too familiar with: Wakanda, the fictional, futuristic home of Marvel superhero Black Panther, a place that now exists only in a popular consciousness propagated by the very same digital platforms that have propelled Ye’s own celebrity.

Finally, Ye gets out his pen and signs his sneakers. It is unclear what this signature is worth to Museveni, who typically appends his own signature to legislation and treaties, but he accepts the gift graciously enough.

Ye and Kim may not realise it, but they gave Museveni another gift that day — by sprinkling the president with just a little bit of their celebrity stardust. That stardust will be used to support Museveni’s violent homophobia, and his crackdown on opposition leaders, and the corruption endemic to his regime. It will be used as ammunition in Museveni’s war with another rapper, Bobi Wine, who did not have the luxury of confusing Uganda and Wakanda as he was being tortured by Museveni’s soldiers.

“It would have been great if had used his voice for the good of people in Africa,” said Wine, of West. “I’m a musician but I am not allowed to stage a show in my own country because I disagree with the president. It is very disappointing.”

West must be disappointed too. He was hoping to meet King T’Challa, and got grumpy old Museveni instead. Even for one of the world’s most famous people, the gap between the real world and fantasy can be hard to navigate.

Read More: BobiWine – ‘The writing is on the wall in Uganda’