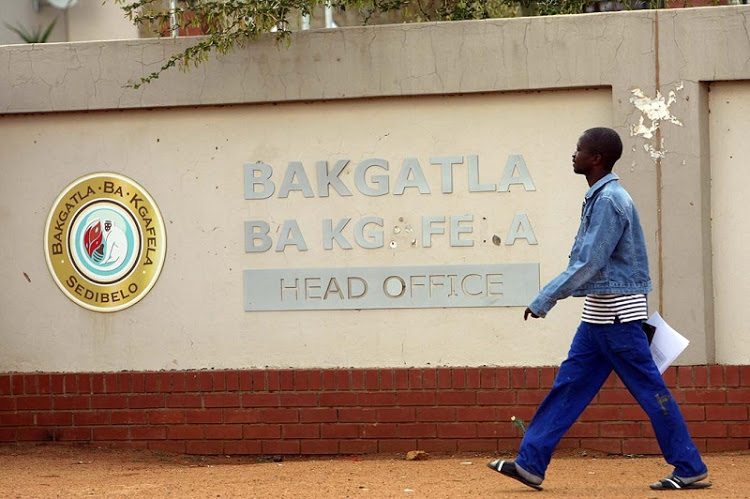 A man walks past the tribal headquarters of the Bakgatla Ba Kgafela tribe in Pilanesburg in the North West province in this March 2011 file photo. Picture: SUNDAY WORLD

A group of 38 villagers won an important victory in the Constitutional Court against their own community mining company and set a precedent for how land owners should be dealt with by mining companies.

In a ruling that encompassed the broad sweep of the Mineral & Petroleum Resources Development Act, customary law, the constitution and the Interim Protection of Informal Land Rights Act, a full bench of Constitutional Court judges agreed the 38 owners of 13 sections of a farm had their rights infringed.

The Itireleng Bakgatla Mineral Resources company set up by the traditional council of the Bakgatla-Ba-Kgafela community, of which the 38 villagers were part, had run into resistance to the construction of a platinum mine on the farm.

Itireleng approached the high court in Mafikeng and secured an eviction order against the villagers and an interdict to prevent them from returning to the farm subject to the outcome of an appeal launched by the villagers.

The high court refused them leave to appeal, as did the Supreme Court of Appeal, which dismissed their application to appeal, prompting the villagers to approach the Constitutional Court.
The Constitutional Court not only set aside the high court ruling on the eviction and interdict, it set aside the Supreme Court of Appeal’s decision and awarded the villagers costs in fighting the battle in the highest court in the country.

The villagers said that they had not been properly consulted and that a decision taken by the tribal authority of the Bakgatla to permit mining on the farm had no bearing on the villagers because they were the true owners of the farm.

The Constitutional Court found that Itireleng had not followed due process laid out in the Mining Act, which made provision for conflict between holders of a mining right and land owners, clearing the way for mediation, compensation and, as a last resort, expropriation of land in favour of the mining company.

Itireleng should first have exhausted its options in dealing with the villagers in terms of the Mines Act before approaching the court for an eviction order, the judgment said.

The opening comment in the judgment made clear why this was such an important case. “Currently, in SA, the clamour for the redistribution of land has not only heightened interest in land, but has also put at the centre stage the sociopolitical discourse raging on in the country,” the judgment handed down on Thursday said.

The matter before the court was at its most basic a dispute between “occupiers of land” and the holders of a mining right, it said, noting mining was a major contributor to the country’s economy.
The Mines Act sought to strike a balance between the interests of the land owner and the mining right holder, while the Interim Protection of Informal Land Rights Act said no one could be deprived of their informal right to land without their consent.

The case before the court was complicated by the ownership question of the farm, which was registered in the name of the minister of rural development & land reform in trust for the Bakgatla community.

Itireleng argued that it had held a traditional meeting with the Bakgatla at which it secured consent to proceed with the mine. The villagers, however, pointed out that they were the true owners of the farm, not the Bakgatla..

“It brings to the fore the question whether the applicants [the villagers] are without a legal remedy simply by virtue of the fact that they constitute a community whose tenure of the farm in issue here is legally insecure as a result of past racially discriminatory laws or practices,” the judgment said.

Sedibelo Platinum Mines said it “ is studying the judgment and will advise pursuant actions as and when appropriate”.