The disposal of computers and other electronic and electrical goods, e-waste, is a growing global problem. In 2011, the world threw away 41.5m tons of electrical equipmentand this is expected to rise to 93.5m tons by 2016. This is a concern because dumped electronic consumer goods are, essentially, toxic waste. Old-style televisions and CRT monitors contain lead and phosphorous pentachloride, printed circuit boards contain arsenic, cadmium, mercury and bromides, and fridges contain CFCs. Buried in landfill, broken up improperly or burnt, these toxins can be exposed to the air or leach out into the soil and into the water table, and this has caused a healthcare crisis.

But e-waste is also comprised of small amounts of valuable metals such as high-quality copper, gold, silver and palladium. This means that despite being thrown away in the West, junk electronics represent a quality raw material for waste processing industries, especially in the developing world.

In the EU, the Waste Electronic and Electrical Equipment (WEEE) regulations govern how e-waste should be treated and processed, and also restrict where it can be exported. Equipment cannot be shipped to non-OECD (i.e., developing) countries for recycling and recovery, only for reuse. They must be tested to show that they are fully functional and packed so that they are not damaged in transport; otherwise they are classed as waste. However there is considerable concern about illegal export to Africa and Asia. 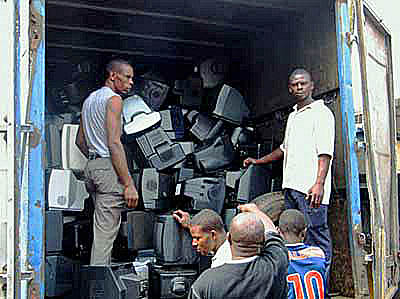 “Just another day at the office!”

In the second-hand markets of Lagos, Nigeria, little consideration is given to whether the item is tested or untested due to an abundance of repairers. But equipment shipped here untested is classed as e-waste, and so is in Lagos illegally. It might have been shipped in a container hidden behind working goods, concealed inside a car, or falsely described as a personal item. In many developing countries, e-waste is not treated to the same standard as in developed countries and there is often poor treatment leading to release of hazardous chemicals that can harm both people and the environment.

Still, efforts to clamp down on the e-waste trade have shown success. It was estimated in 2005 that 75% of electrical and electronic goods imported into Lagos were junk. The amounts are falling, with e-waste accounting for 12.5% of shipments in 2009. By 2011, 70% of electronics imported into Lagos was second-hand and only 15% of that was non-repairable. The figures are only estimates but they show a clear downward trend due to the efforts of regulators worldwide.

This steady reduction shows the success of controls on the shipment of e-waste to Africa, such as the Basel Convention on the movement of hazardous waste, the Bamako Convention signed as an understanding by many African nations, and Transfrontier Shipment of Waste regulations. Basel is an international convention set up to stop developed countries “dumping” their waste on developing countries, however many African countries felt that this did not go far enough and so the Bamako Convention was established to protect African nations. It is hard to determine how effective the legislation has been alone, as the countries to which e-waste is shipped have become considerably more aware of the problem, to the extent that Kenya and Nigeria have passed their own e-waste regulations that require importers to register for greater scrutiny.

Studies tend to ignore the significant issues associated legally exported e-waste that has reached the end of its useful life. Substantial quantities are concentrated in developing countries, whether imported from abroad or manufactured at home. It is estimated that by 2030 developing countries will be discarding around 400-700 million obsolete computers per year, compared to 200-300m in Western nations. 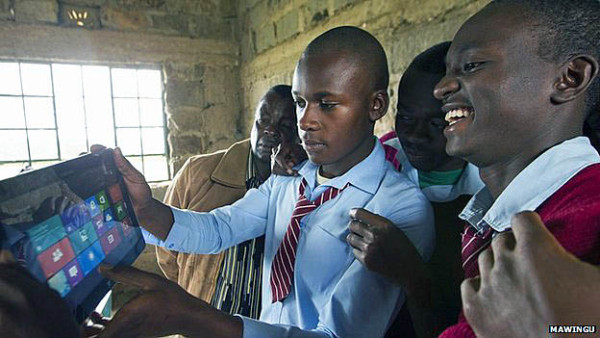 Why not I too?

Access to information technology for all is critical for African social and economic development, and the achievement of the United Nations Millennium Development goals for the region regarding education and sustainable development. In some African countries 80–90% of the population cannot afford to buy new equipment and so there is a high demand for quality second-hand goods, which can be bought for a third of the price. So barring the export of second-hand electronics to Africa from the UK and other countries will have a significant effect on the ability of developing countries to achieve the Millennium Development goals. The problem is not with the origin of the equipment, but with the lack of e-waste controls, collection and recycling infrastructure in developing countries.

The importance of providing a solution is evidenced by the establishment of The E-waste Solutions Alliance for Africa featuring a collaboration of Dell, HP, Nokia, Phillips and Reclaimed Appliances. The alliance has been working with governments, regulators and others to assist in developing regulations, guidelines and infrastructure, creating a climate attractive to recyclers. Later this year, East African Compliant Recycling, a full scale e-waste recycling plant, will be launched in Nairobi in Kenya, providing a model that can be used throughout Africa. It will provide a sustainable means to process e-waste, whatever its origin, and recover valuable materials, create jobs and protect the environment and human health.

Margaret Bates has been involved in wastes management for over 25 years and undertook her PhD on landfill microbiology.  She is a Chartered Wastes Manager and a Chartered